An IKEA has been forced to send home 73 workers for self-isolation after a mass coronavirus outbreak at one store.

Some 13 workers tested positive for the virus at the furniture giant’s store in Reading, Berkshire.

A further 60 workers were then told they had to self-isolate at home because the may be at risk.

Some 13 workers tested positive for the virus at the furniture giant’s store in Reading, Berkshire (pictured)

The store is currently closed to the public due to the month-long Government lockdown.

But it is open for customers who shop online to use their click and collect service.

The store, which has been hit by queuing problems, employees up to 350 staff.

Kim Chin-Sung, IKEA Reading Market manager, said: ‘The health and safety of our customers and co-workers is our top priority. 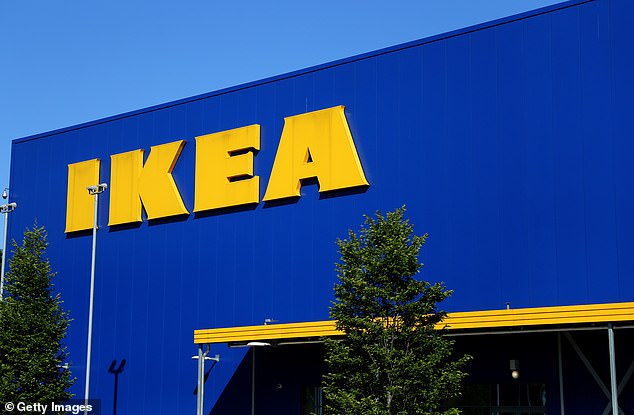 ‘On Saturday, we were made aware that a co-worker had tested positive for Covid-19.

‘Shortly after this, other co-workers began receiving alerts from the NHS Track and Trace System in the normal way, and were immediately sent home to self-isolate on full pay.’

It comes one day after a ‘small number’ of Sainsbury’s employees at their Hull branch were told to self-isolate when another worker tested positive for coronavirus.

And three weeks ago 350 workers at the Haribo factory in Yorkshire were forced to go home and isolate after an outbreak which saw 30 staff test positive for the disease.

Chilled and damp interior with ultraviolet light: Why meat plants are a hotbed for coronavirus outbreaks

The virus thrives in cold, damp and indoor environments, particularly on cool surfaces.

The lack of a breeze or ultraviolet light from the sun means the moisture remains and can’t be killed off inside food processing plants.

Furthermore, social distancing is particularly difficult in workplaces with a busy production line meaning the virus is likely to spread more easily.

Loud machinery also forces people to raise their voices and researchers say situations where people have to shout result in an increased risk of projecting the virus to others.

It’s not just in the UK where a trend has been seen, either, after hundreds tested positive in a Berlin slaughterhouse, while a wet market in Wuhan is believed to have been at the heart of a huge number of infections early on in the crisis.

The employees at the sweet company’s distribution centre and factory in Front Street, Pontefract, tested positive for the virus and were told to self-isolate.

Haribo said strict health and safety measures are in place at the site and insisted the company had gone ‘above and beyond’ Government guidance.

The German-owned firm employs 732 people at its sites in Castleford and Pontefract.

This comes in the wake of a spate of coronavirus outbreaks across the UK which have hit giants including Bernard Matthews, Nestlé, Jammy Dodgers and Wagon Wheels.

Around 350 workers at food processing factories across the UK have now tested positive for coronavirus in less than a fortnight.

There has been a spate of coronavirus outbreaks at factories across the UK in less than two weeks, including:

At the end of October it was confirmed around 140 people had tested positive for the virus amid a ‘significant outbreak’ at the Cranswick Country Foods site in Watton.

It was also revealed that 29 people had tested positive at a Nestlé factory in Fawdon, Newcastle upon Tyne, which houses around 600 workers.

Some 75 workers at a Bernard Matthews turkey plant in Great Witchingham, Norfolk, tested positive for coronavirus earlier this month.

As of October 15 there had also been 72 positive cases at Bernard Matthews’ food processing facility in Holton near Halesworth, Suffolk County Council said.

Last week, a biscuit factory where Jammy Dodgers and Wagon Wheels are made was hit by an outbreak of Covid-19, with four staff testing positive for the virus.

Nestlé confirmed the staff had tested positive since October 16 – around five per cent of all employees.