With a street frontage of just six metres, the Pencil Tower Hotel is barely wider than a terraced house.

But the 110-metre “skyscratcher” proposed for the southern end of Sydney’s CBD promises bird’s eye views of the city – albeit from a narrow perch.

Planning documents for the $35.6 million hotel, which are on exhibition until February 2, describe the “improbably narrow” tower as a “skyscratcher” because it is too thin to be regarded as a skyscraper: “It’s as if 30 Paddington terraces were stacked one above the other.” 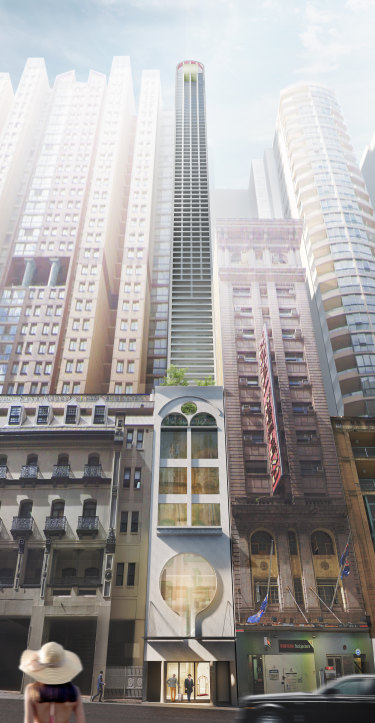 With a street frontage of just six metres, the Pencil Tower Hotel will be barely wider than a terraced house.Credit:

Architect Neil Durbach said there were pencil towers in Hong Kong and New York with heights more than 20 times greater than their width.

“We believe it will be the narrowest and most slender in Australia,” he said.

In a nod to interstate rivalry, he said the Pencil Tower Hotel will be narrower and taller than the thinnest tallest building in Melbourne, the Phoenix Apartments in Flinders Street.

The 33-storey hotel, which won a City of Sydney design competition, will contain 173 rooms that are typically 13 squares metres in size. 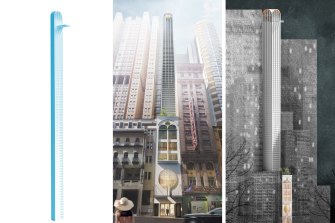 An artist’s impression of the proposed tower.

“While compact they are designed for overlapping and intuitive use – closer to a train or plane compartment than a conventional hotel room,” Mr Durbach said.

The hotel would also feature shared spaces such as a three-storey “urban room” housing the lobby, cafe and lounge, a walled courtyard garden on the sixth floor and a Hammam pool and spa deck on the 30th floor.

The site at 410 Pitt Street was previously occupied by a six-storey, 74-room boarding house. If approved, construction of the hotel designed by architecture firm Durbach Block Jaggers could begin later this year and be completed by 2023.

The slender tower has won praise from Philip Oldfield, associate professor in the University of NSW’s Faculty of Built Environment, who described the design as ingenious and beautiful.

“I appreciate the sweeping curved light wells in the plan that seek to provide light and view to the hotel rooms near the centre of the building,” he said. “It’s an ingenious way of organising the design on what is an incredibly tight site.”

Professor Oldfield said the hotel was “quite unique” compared to many bulkier towers emerging in the CBD and Parramatta.

“The other thing that marks 410 Pitt Street as unique is its tight site, hemmed in by existing buildings, requiring innovative architecture to ensure all spaces get light and view,” he said.

While the street frontage is narrow, the tower will be 34 metres deep, Mr Durbach said. “Given the site is located in the centre of a city block with similarly tall buildings surrounding it, the wind loads are not significant.”

The planning documents say the project will test “the boundaries of construction and design”.

Kathlyn Loseby, NSW president of the Australian Institute of Architects, said lift capacity and fire stairs, structural stability and wind loading were challenges that could be accommodated during the design process. But the small floor area meant slender buildings were more expensive to build per usable square metre of space.

“I think this is a trend that we may be seeing more of over the coming years as the city develops,” she said.

Sydney’s skyline is increasing in height and the number of skyscrapers, with 39 towers more than 150 metres in height. In comparison, Hong Kong has 482 towers above 150 metres and Tokyo 160, said Professor Oldfield.

“On the whole Australian cities are still far more horizontal than Asian cities.”