In a bid to subvert the election, Trump invites Michigan GOP legislators to White House

Washington: After failing repeatedly in court to overturn election results, US President Donald Trump is taking the extraordinary step of reaching out directly to Republican state legislators as he tries to subvert the Electoral College process, inviting Michigan lawmakers to meet with him at the White House on Friday.

Trump contacted the Republican majority leader in the Michigan State Senate to issue the invitation, according to a person briefed on the invitation. It is not clear how many Michigan lawmakers will be making the trip to Washington, nor precisely what Trump plans to say to the lawmakers. 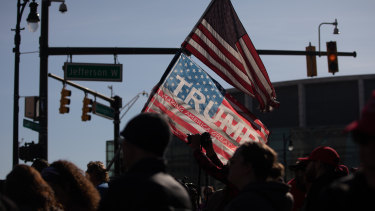 Demonstrators wave American flags at a pro-Trump protest in front of the TCF Centre during the 2020 Presidential election in Detroit, Michigan.Credit:Bloomberg

The White House invitation to Republican lawmakers in a battleground state comes as the Trump campaign has been seeking to overturn the results of the election in multiple states through lawsuits and intrusions into the state vote certification process, and as Trump himself has reached out personally to at least one election official in Michigan, a Wayne County canvass board member, Monica Palmer.

Some members of Trump's team have promoted the legally dubious theory that friendly legislatures could under certain scenarios effectively subvert the popular vote and send their own, pro-Trump delegations to the Electoral College.

The Michigan Senate leader who received Trump's invitation, Mike Shirkey, said in an interview earlier this week with Bridge Michigan, a local news outlet, that the Legislature would not move to appoint its own slate of electors, stating, "That's not going to happen."

The statewide canvassing board, a bipartisan four-member panel, is responsible for certifying Michigan's election results by a Monday deadline, a step that must take place before any move could be made to change the electors. 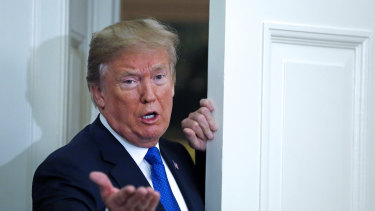 Donald Trump’s refusal to concede the election is a dilemma for the nation.Credit:Bloomberg

One of the Republican members of the board, Norm Shinkle, said in an interview on Thursday that he was coming under enormous pressure regarding his vote, which he said was complicated by a late night announcement from the two Republicans on the four-member canvassing board in Wayne County, which includes Detroit, that they wanted to "rescind" their votes to certify the county's results.

Trump reached out Tuesday night to one of those Republicans, Palmer, to thank her for her support, according to two people briefed on the call. Palmer and the other Republican board member, William Hartmann, had initially refused to certify the election results, before relenting on Tuesday night after a public outcry and accusations of that they were trying to disenfranchise voters in Detroit, which is more than three-quarters black. Palmer and Hartmann are white.

On Tuesday, Shirkey condemned threats of violence received by members of the Wayne County board of electors, and he indicated that the legislature would conduct their own investigation, but that it was not their place to resolve questions about the election.

"Additional concerns have been brought before the courts, which is the proper place to resolve questions of legality surrounding the state elections process," Shirkey said.

The moves are the latest — and the most brazen — salvos in a scattershot campaign-after-the-campaign waged by Trump and his allies to cast doubt about President-elect Joe Biden's decisive victory by mounting quixotic legal challenges and by attempting to seize the mechanisms of certifying electoral outcomes.

Undergirding it all is a political strategy that includes trafficking in racist insinuations about elections conducted in cities like Detroit, Philadelphia, Milwaukee and Atlanta with large and politically powerful black populations.

The Republicans sought to rescind the certification votes they had cast Tuesday night through affidavits released late Wednesday, roughly 24 hours after Trump had spoken with Palmer. But legally, functionally and practically, they cannot do so.

"There is no legal mechanism for them to rescind their vote," Tracy Wimmer, a spokeswoman for Michigan's top election official, Secretary of State Jocelyn Benson, said Thursday. "Their job is done and the next step in the process is for the Board of State Canvassers to meet and certify."

That meeting is scheduled for Monday. 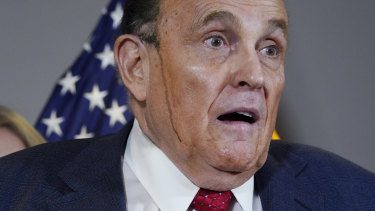 The Trump campaign's lead election lawyer, Rudy Giuliani, announced on Thursday that the campaign was withdrawing a federal suit it had filed seeking to stop the certification of results in Wayne County. The campaign attached the affidavits to the dismissal notice.

After Palmer and Hartmann initially refused to certify the election results over slight discrepancies in majority-black precincts, while ignoring similar problems in heavily white areas of the county where Biden won a far smaller share of the vote, public outcry ensued, with 300 voters and civil rights leaders on a Zoom call expressing outrage.

Hours later, Palmer and Hartmann changed course and voted to certify. But in their affidavits the next day, they effectively said that they had been bullied into voting for the certification and that they did not believe the Democrats on the board were following through with their promise to ensure an independent audit of the Wayne County results.

The announcement about the Republicans' attempt to rescind their certification votes arrived in a news release from a Virginia-based public-relations firm, ProActive Communications, that has been paid millions for consulting work for Trump's campaign and whose founder, Mark Serrano, has been a frequent television defender of the president's.

With the withdrawal of the Wayne County suit, the Trump campaign and its Republican supporters have now lost or withdrawn from all of their major legal actions in Michigan, although the state's Supreme Court is still considering an appeal of a lower court's decision not to halt the certification of Wayne County's results.