In solidarity: Foreign ministers urged to back Australia in China spat

London: Foreign Ministers from nine countries including Germany, France and Canada are being urged to issue statements in support of Australia against China's attempts at "bullying and coercion".

Members of Parliament and of the global Inter-Parliamentary Alliance on China are sending a joint letter to their foreign ministers on Tuesday, London time. 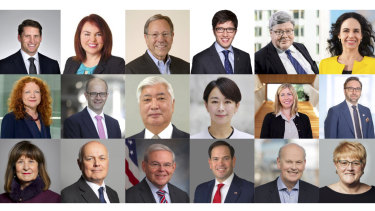 The global alliance of cross-party representatives came together earlier this year to try to counter China's increasing aggression particularly against Australia.

It is represented in Australia by Andrew Hastie, chair of Parliament's Intelligence and Security Committee. Hastie is poised to join the ministry in Prime Minister Scott Morrison's pre-Christmas reshuffle.

The parliamentarians said the attempts by the Chinese government to "threaten, bully and coerce Australia into acquiescing to its political demands" were a threat to "democratic countries everywhere."

It comes after Chinese state media confirmed that Australian coal imports into China would be blocked indefinitely in one of several measures recently taken against Australian producers, including stinging winemakers with tariffs of up to 212 per cent.

The MPs said the numerous "formal and de facto trade sanctions" imposed by China on Australia, to the values of billions of dollars, was "coercive diplomacy".

"Punitive and politically motivated economic sanctions are unacceptable and have no place in a rules-based international order based upon reciprocity and mutual respect," the MPs tell their foreign ministers in the letter.

"We call on the government to express its full solidarity and support for the Australian people in this challenging time."

"[Our country] must stand together with democracies everywhere in ensuring that attempts to single out and bully any one country will not work and will only serve to bind us closer together."

Earlier this month the group launched a global campaign to encourage people around the world to buy Australian wine in December to support winemakers.

China's state media criticised the campaign and described IPAC as a "nuisance alliance".

"In face of the anti-China rhetoric stirred up by the IPAC, China must take a tit-for-tat stance," an opinion piece published by the populist Global Times wrote.

Nick Timothy who served as chief of staff to former British prime minister Theresa May and urged her to take a hawkish approach on Chinese investment in critical infrastructure, said IPAC campaigns were being noticed by Beijing and should also be taken seriously by the Western countries represented by the alliance.

"Governments in Europe have been reluctant to stand up to China and incredibly naive for some years," he said.

"But the evidence of Beijing’s nefarious intent is mounting, and governments are under increasing pressure from their electorates and parliaments to toughen up.

"China’s attacks on IPAC only serve to prove that the alliance is on the right side of the argument."