Two brothers were left gobsmacked after seeing hundreds of dolphins forming a superpod to devour a shoal of fish before being gatecrashed by three whales.

Kade Tame, 26, and brother Devon, 28, from Cape Town, South Africa, were fishing just off Fish Hoek in False Bay when they saw the blue sea in the distance unexpectedly turn into a choppy white froth.

The brothers were casting bait out of their fishing boat Wizard when they instead decided to reel in and motor towards the commotion about a mile away out of curiosity.

But to their complete surprise, they came across hundreds of dolphins forming two separate superpods and swimming in circles in a bid to capture and feed on a shoal of fish.

Incredible footage taken by the brothers shows the majestic dolphins leaping in and out of the choppy waters before amazingly being joined by three humpback whales. 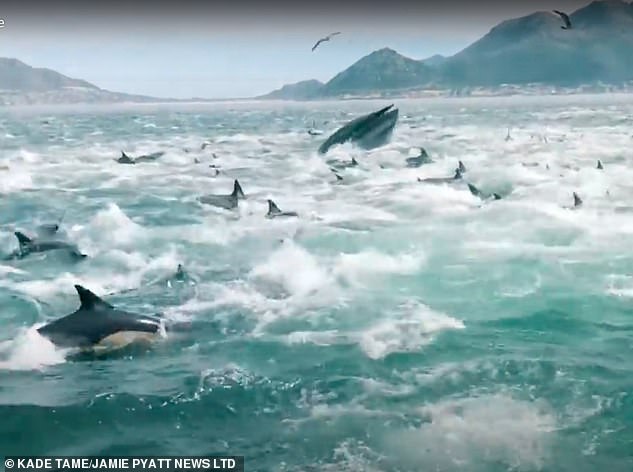 Kade Tame, 26, and brother Devon, 28, from Cape Town, South Africa, were fishing just off Fish Hoek in False Bay when they came across a superpod of hundreds of dolphins (pictured)

In the video, a giant humpback whale, which can grow up to 52-feet and weigh up to 30 tons, can be seen emerging from the waves in the centre of the circle of ravenous dolphins.

Kade, who runs natural medicine company The Fulvic Revolution, explained: ‘We realised as we got close there were about 1,000 dolphins leaping in and out of the water creating a sort of wide long barrier and couldn’t understand it.

‘Then in the distance we saw what we reckon was about another 1,000 dolphins heading straight for the other dolphins from Muizenberg and we just couldn’t work out why they were coming together.

‘Then as the two superpods came together as one we realised that the Muizenberg pod had been driving a huge shoal of fish into a trap set by the other dolphins laying in wait for them. 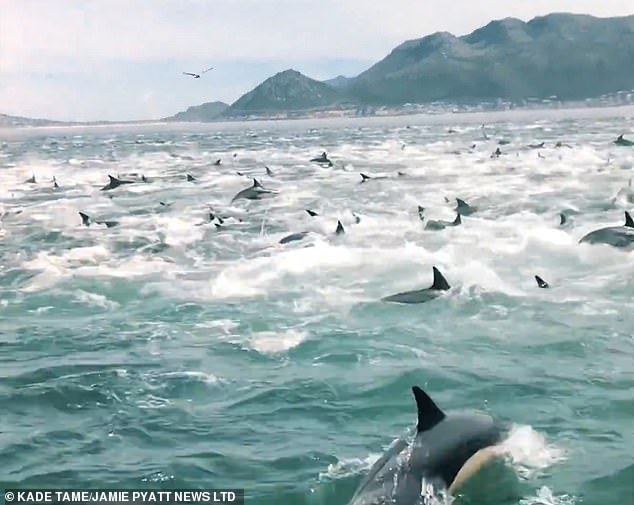 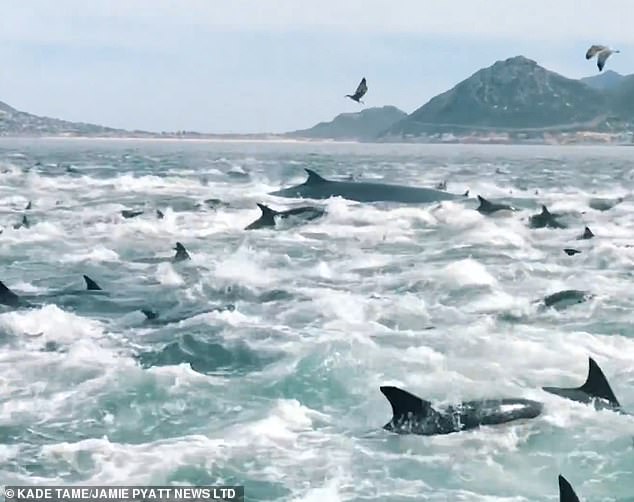 In the video, a giant humpback whale (centre), which can grow up to 52-feet and weigh up to 30 tons, can be seen emerging from the waves in the centre of the circle of dolphins

‘With the prey fish all trapped in the middle the dolphins then began leaping around in the water in a huge fast circle spinning all the prey fish into a tight ball of sushi waiting to be eaten.’

In the video, Kade and Devon, who runs the Hamiltons Property Portfolio estate agent branch, can be heard laughing at the rare sight while another boat is also seen watching the stunning scene.

Kade, who is a businessman, said the dolphins were disrupting the water so much during the lively feeding frenzy that their 18-foot boat even started to spin in circles.

He continued: ‘The dolphins were creating such a swirling current around the prey fish that our 18-foot fishing boat began to slowly spin in circles and then the feeding frenzy started with the dolphins.

‘But then with about two thousand dolphins leaping in and out of the water in a sea that looked more like a white-water washing machine than ocean but the best was yet to come for us!

‘Suddenly a humpback whale arrived followed by two others and decided they wanted in on the feast and without so much as a thank you to the dolphins got stuck into the fish ball.

Kade, who is a businessman, said the dolphins were disrupting the water so much during the feeding frenzy (above) that their 18-foot boat even began to spin in circles 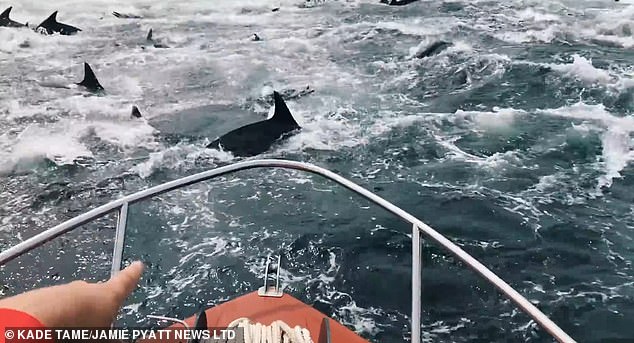 ‘It seemed like there was enough for everyone as the dolphins and whales were feasting for about half an hour until all the food ran out and then they slowly drifted away.’

Dolphins, which grow up to nine-feet-long and can swim at up to 20mph, eat up to 30lb of fish, squid and crustaceans a day and are common sights along the coast of South Africa.

While humpback whales consume up to 3,000lb of fish a day, so both sets of mammals had a bumper feast just a mile out to sea.

Superpods of up to 10,000 dolphins at a time have been recorded rounding up fish in ‘bait balls’ and once the feast is over the intelligent and social creatures return to their pods.