An IKEA in Germany gave hundreds of people from the local Muslim community permission to use its car park for socially distanced prayers over the weekend.

On Saturday and Sunday, millions of Muslims around the globe celebrated Eid, the end of the holy month of Ramadan, but social distancing measures in place due to the coronavirus prevents large groups from gathering in confined spaces.

Therefore, many mosques cannot accommodate large numbers of people, and it has proven difficult for the local communities to congregate to gather and pray.

However, one Mosque in the city of Wetzlar, near Frankfurt, thought outside the box and asked their local Ikea if they could use it’s large car park. 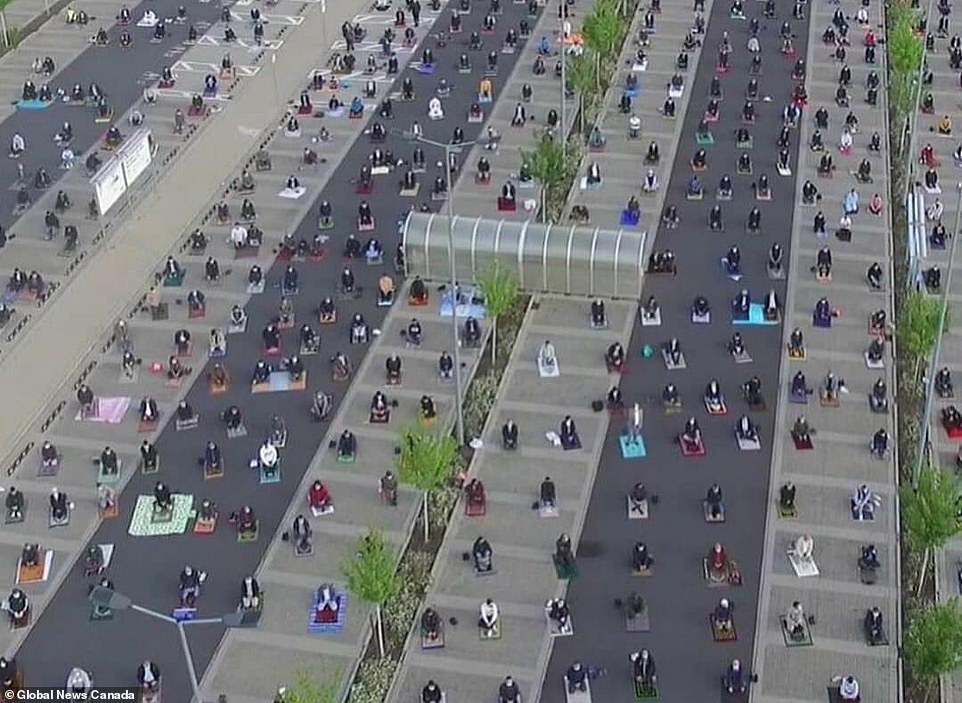 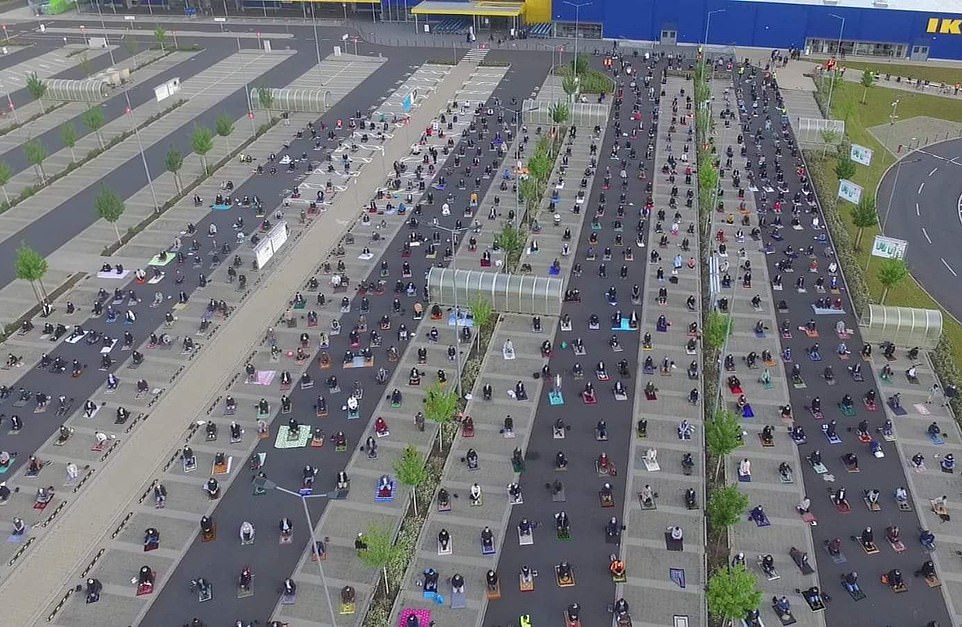 With the recognisable Blue and Yellow of the IKEA behind them, the community kept roughly 1.5 meters apart from one another while praying, as is required by Germany’s coronavirus measures

With plenty of space, the group were able to pray while maintaining a safe distance from one-another, observing the social distancing guidelines that are in place to prevent the spread of the coronavirus.

Germany’s guidelines stipulate that people should keep 1.5 meters from each other when in public.

The Mosque – IGMG Wetzlar FATIH CAMII – released a statement thanking the furniture store, which is just down the road from the Mosque.

‘We would like to thank the Wetzlar police, the Wetzlar public order office, Ikea Wetzlar management, brothers, and all who contributed to making this extraordinary holiday prayer possible,’ the statement read.

Speaking to BBC news, the chairman of a Wetzlar mosque, Kadir Terzi, said that he approached IKEA when looking for an alternative venue to allow foe people to pray and practice social distancing.

He said that he was not hopeful he would get any positive response.

‘But the store manager didn’t hesitate for a second and said ‘yes, you can pray’. I was surprised and happy at the same time,’ Mr Terzi explained.

He said that the opportunity to gather the community in the car park was particularly poignant because people had felt isolated during Ramadan due to Covid-19, when ordinarily it is a month for families and communities to gather each evening to break their fast and organise charity work.

He said to the BBC: ‘It was a completely different Ramadan month, without contacts, without visits and without breaking the fast together.’ 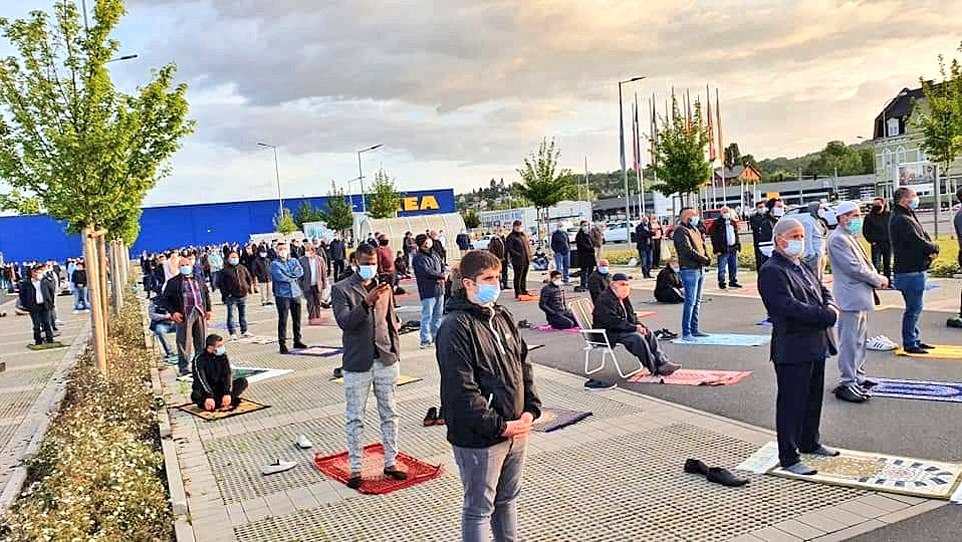 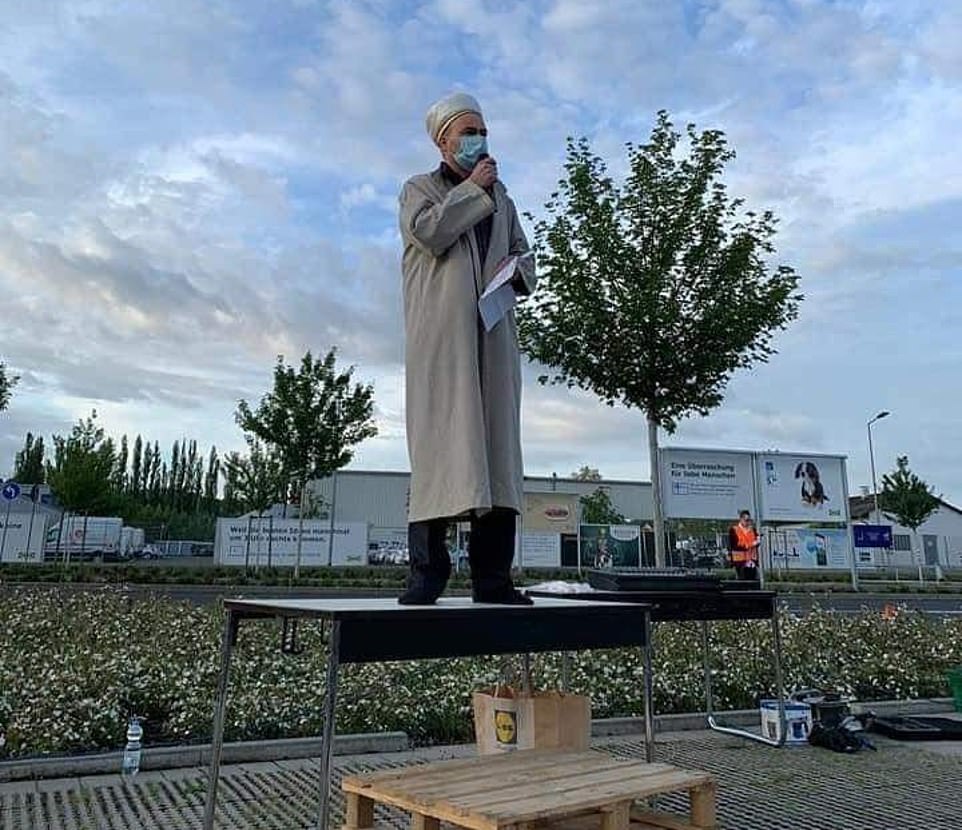 He told the BBC that he did not have much confidence that he would receive a positive response, but was pleasantly surprised when they gave his community permission

Aerial drone footage of the gathering, shared by the mosque on Facebook showed hundreds of Muslims praying on Eid while evenly spaced throughout the furniture stores car park, with the iconic blue and yellow store in the background.

Each person had their own prayer mat, and was wearing a protective face mask. A prayer leader stood at the head of the group, leading the service and prayers.

Eid-al-Fitr, also called the ‘Festival of Breaking the Fast’, is a religious holiday celebrated by Muslims worldwide, and marks the end of the month-long dawn-to-sunset fasting of Ramadan.

Upon seeing the video from the car park, people on twitter reacted with very positively. 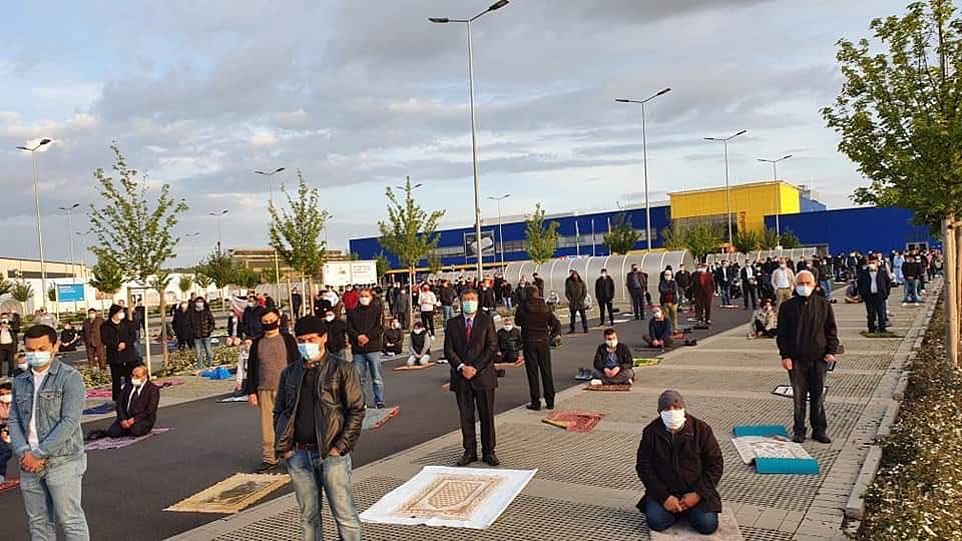 In addition to being required to keep 1.5 meters apart, people in Germany also must wear protective face masks while in a variety of public settings, including grocery stores, other shops, in airports and train stations

Mosques and other places of worship in Germany reopened to the public on May 9, but they still have a responsibility to follow rules that help limit the spread of the coronavirus.

While Muslims can perform their dawn, midday and late afternoon prayers in most mosques in the country, they were not allowed communal gatherings for Friday prayers – or special night prayers called Tarawih – that are traditionally performed during Ramadan.

Worshipers are asked to maintain the necessary distance from one-another, bring their own prayer mats, and to wear face masks.