Hundreds of workers from India were allegedly lured to New Jersey and forced to work for just a few dollars a day to help build a massive Hindu temple, according to a lawsuit on Tuesday.

The global organization is accused of bringing more than 200 low-caste men from India to the US by claiming they were religious volunteers.

When they arrived to the Garden State, the workers — many or all of whom don’t speak English — allegedly had their passports confiscated. 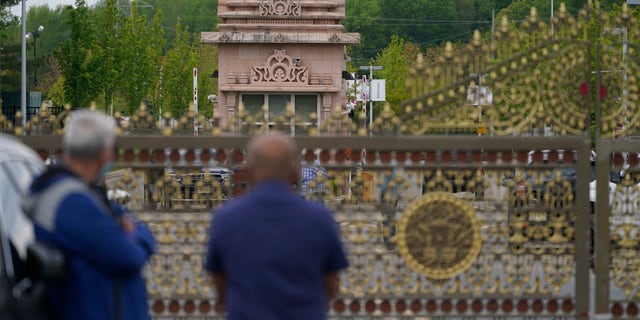 People stand near the entrance to the BAPS Shri Swaminarayan Mandir in Robbinsville Township, N.J., Tuesday, May 11, 2021. Workers from marginalized communities in India were lured to the U.S. and forced to work long hours for just a few dollars per day to help build the Hindu temple in New Jersey, according to a lawsuit filed Tuesday, May 11, 2021. The lawsuit, filed in federal court, accuses the leaders of the Hindu organization known as Bochasanwasi Akshar Purushottam Swaminarayan Sanstha, or BAPS, of human trafficking and wage law violations. (AP Photo/Seth Wenig)

They were forced to work at the temple from 6:30 a.m. to 7:30 p.m. for around $1.20 per hour, the court documents allege. Of that, the workers allegedly only received $50 in cash per month, with the rest deposited into their accounts in India.

Known as a mandir, the ornate temple, made out of Italian and Indian marble, sits on a 162 acre in Robbinsville, near Trenton.

According to the lawsuit, the exploited workers were kept in a fenced-in compound on the property monitored by cameras and guards.

They were told that if they tried to leave, police would arrest them because they didn’t have their passports, the suit alleges.

An attorney representing several of the workers, Daniel Werner, called it “shocking that this happens in our backyard.”

“It is even more disturbing that it has gone on for years in New Jersey behind the temple’s walls,” Werner said.

Some of the workers had been on the site for years and were not allowed to leave unless accompanied by somebody from BAPS, the attorney said.

FBI agents descended on the sprawling compound on Tuesday on “court-authorized law enforcement activity,” an agency spokesperson said, without elaborating.

A spokesperson for BAPS told the Associated Press that the organization was first made aware of the accusations early Tuesday morning.

“We are taking them very seriously and thoroughly reviewing the issues raised,” Matthew Frankel said.

This story first appeared in the New York Post.