India’s approval of homegrown vaccine criticised over lack of data

The approval of Bharat Biotech's COVAXINnews, announced by the drugs controller general of India (DCGI), was hailed by Prime Minister Narendra Modi and his ministers as a success in the country's self-reliance push. 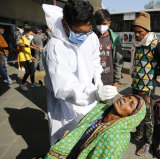 A health worker takes a nasal swab to test for COVID-19 at state transport bus stand in Ahmedabad. Credit:AP

"On what basis was this approval given when Bharat Biotech has NOT shown enough data proving safety & efficacy?" transparency activist Saket Gokhale asked on Twitter.

Gokhale has filed a request under India's right-to-information law asking the government for safety and other data for the two vaccines approved on Sunday.

Serum Institute of India (SII), the local maker of the AstraZeneca shot that will be branded COVISHIELD in the country, also took a dig at the Bharat Biotech vaccine.

"Until we get the efficacy result, how do we know that anything works?" SII Chief Executive Adar Poonawalla told Reuters.

A government scientist said in November COVAXIN might be approved in February or March. It is now likely to be rolled out much earlier following the approval on Sunday.

Opposition lawmakers and former ministers on Sunday questioned the lack of transparency in approving it.

"Approval was premature and could be dangerous," said opposition lawmaker and former minister Shashi Tharoor.

"Its use should be avoided till full trials are over. India can start with the AstraZeneca vaccine in the meantime."

Vardhan urged Indians to trust that "stringent protocols" had been followed for the two approved vaccines.

In the largest such trial in India, Bharat Biotech said it had recruited 23,000 volunteers out of a target of 26,000 for an ongoing Phase III trial of COVAXIN which began in November.