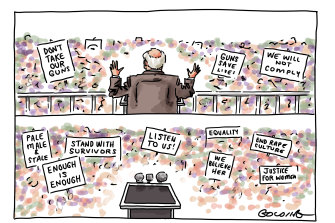 To submit a letter to The Age, email [email protected] Please include your home address and telephone number.

Alcoa has been on taxpayer life support for ages and still it goes on – “Portland smelter secures lifeline” (The Age, 20/3). The worldwide aluminium industry (like coal) is an unviable, uneconomic corpse. There can be no exit plan for this subsidisation folly – it will continue, then ultimately fail.

With all the money spent on it by federal and state governments, the 500 odd jobs at Alcoa (say 1000, including indirect jobs) could have been reinvented multiple times. Plus, the new jobs would be cleaner, sustainable and more energy efficient, unlike those propped up by this parasitic sponge on the energy grid. This mob alone absorbs about 10per cent of the state’s energy. It is a major contributor to higher energy bills for Victorians.
Royce Bennett, Baxter

A lack of co-ordination

Portland has “great piles of logs rejected by China sit growing dry and unusable on a wharf” (The Age, 20/3), and then on the next page we read about VicForests’ plan to log forests south of Dinner Plain.

Apart from the environmental concerns, it seems crazy that there is such a lack of co-ordination regarding the necessity and extent of logging. Considering how degraded the Australian landscape is becoming and the impacts on wildlife habitat destruction, a co-ordinated policy approach is required to end unnecessary destruction.
Denise Stevens, Healesville

Liam Mannix’s article (Sunday Age, 14/3) questions whether we may be entering an age of pandemics. The proliferation of ever-expanding cities and the impingement on the natural environment can only get worse. There just is not any impetus to stop it, fuelled as it is by greed, money and also, of course, the survival needs of populations in underdeveloped countries. Coupled with the need for urgent action on climate change, the future looks very bleak indeed. We are crying out for great leadership but where is it?
David Fry, Moonee Ponds

A specialist has given me a referral for a scan and a biopsy of an abnormal lymph node. I contacted the imaging service and was advised that if both matters were addressed at the same appointment, the cost of the biopsy would be payable by me. However, if it were undertaken on a different day, a substantial part of the cost would be payable by Medicare. The long and the short of it is that I will be attending on two separate days, reducing productivity, adding to traffic congestion, increasing carbon emissions, and taking up valuable space in the health system.
Vera Boston, North Fitzroy

The comment by Wesley College’s principal, Nick Evans, that the school is a “microcosm of Australian society” (The Age, 20/3) is risible. I am sure he is sincere in wanting to root out the appalling behaviour towards girls and women exhibited by many of his students. All well and good and long overdue.

However, the cohort of Wesley students preparing for careers in law, medicine, stockbroking, merchant banking, pharmacy, dentistry etc is not representative of society. Where are the kids who plan to work in the trades, public sector, armed forces, police, nursing, shearing, fruit picking, supermarkets and so on? I rest my case.
Don Lyell, Murrumbeena

Until there are at least an equal number of women (of all colours) in positions of power, nothing will change. Men are not going to relinquish power that easily unless women are in their faces, all day, in the highest offices of power. It is that sad and that simple.
Anna Hayman-Arif, Ringwood East

The Age ran a full-page ad by Pointsbet, using a young female in a very tight, revealing, red dress to advertise betting (Sport, 20/3). It is in very poor taste in these difficult times when women are trying to make a point – respect – which is nowhere to be seen in this ad.
Tina Van Wees, Somerville

Men face this too, surely

Katharine Anderson (Sunday Age Letters, 14/3) says she has made a stand against being categorised by her marital status and that the categories of single, married and divorced are “an example of my relationship to a man defining who I am”. Surely men completing forms are asked the same question. And these days, we can be in heterosexual or same-sex marital relationships, so the gender of a partner is irrelevant in this example.
Heather D’Cruz, Geelong West

Noel Whittaker (Sunday Age, 14/3) looks at possible increased funding for aged care. Taxes spent on providing aged care are not necessarily a “major fall in disposable income across most of the working population”, as he says. If the funds are used for hands-on care, then, via the wages of carers, it is ploughed back into spending in the Australian economy.
Gerry O’Reilly, Camberwell

Your front page reports that “foreign spies are targeting Australia’s mining and agricultural industries in a bid to get sensitive information on how the nation is diversifying trade away from China” (The Age, 20/3). I suggest we refer them to the relevant Australian Bureau of Statistics’ publications.
Robert Gordon, Hawthorn

‘No’ to Victoria’s EV tax

Note from the Editor

The Age’s editor, Gay Alcorn, writes an exclusive newsletter for subscribers on the week’s most important stories and issues. Sign up here to receive it every Friday.