Israel’s ‘apartheid’ is a lie: a son of South African Jews responds to Human Rights Watch

As a child of South African immigrants, I’m all too familiar with apartheid’s atrocities. Black people were devalued as human beings; they were expendable. Growing up in apartheid South Africa, my parents understood how much black lives didn’t matter.

Their black maids gave up years with their own families, instead raising my parents in cities far from their impoverished townships. I’ve heard countless stories of family members who, after protesting for equality, were either jailed or forced into self-imposed exile. 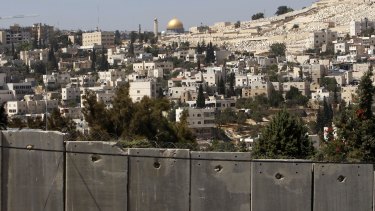 The Israeli barrier in the West Bank village of Abu Dis.Credit:Reuters

Tragically, those who endured apartheid have been mocked by Human Rights Watch’s latest report, A Threshold Crossed. By accusing Israel of enforcing apartheid against Palestinians, the report reveals far more about Human Rights Watch than it does about the conflict. Most distressingly, the report – full of omissions, distortions, and evident agendas – will do nothing to improve Palestinians’ lives.

Human Rights Watch’s accusation against Israel is an absurd distortion of reality which demonstrates its desire to warp the truth in its quest to vindicate foregone conclusions.

According to the report, Israeli authorities “have dispossessed, confined, forcibly separated, and subjugated Palestinians by virtue of their identity” to the extent “that they amount to the crimes against humanity of apartheid and persecution”. Yes, many Palestinians have, and continue to, suffer greatly. Israel too, has contributed at times to this suffering. But despite Human Rights Watch’s 213-page diatribe against Israel’s treatment of Palestinians, it’s the report’s glaring omissions that speak loudest.

In a conflict that has seen Israelis mourn almost 24,000 soldiers and more than 3000 victims of terrorism, the report is notably mum on Palestinian terror’s effect on Israelis, which has, in turn, had tragic consequences for Palestinians. While it mentions the West Bank “separation barrier” – viewed by Israelis as a safeguard against Palestinian terrorism – over 30 times, it neglects to mention the very Palestinian terror attacks that prompted the barrier’s construction. Take, for example, the 2001 suicide bombing of a Tel Aviv nightclub, leaving 21 dead and over 120 injured; most of whom were teenage escapees from the former Soviet Union.

Thus, one must ask, if Human Rights Watch sought an honest understanding of the causes of Palestinian suffering, would it not find it relevant to mention such attacks as part of a greater context? Hamas, too, is mentioned over 10 times, yet, astonishingly, the report omits its designation as a terrorist organisation by Israel, the United States, the European Union, Australia and others.

The report brings two international rulings to justify its accusations: the 1973 International Convention on the Suppression and Punishment of the Crime of Apartheid, and the International Criminal Court’s 1998 Rome Statute. This is rejected, however, by Richard Goldstone. A fierce anti-apartheid advocate who Nelson Mandela appointed as a justice to South Africa’s highest court, he once noted in The New York Times that in Israel, “nothing … comes close to the definition of apartheid under the 1998 Rome Statute”. Goldstone says “the charge that Israel is an apartheid state is a false and malicious one that precludes, rather than promotes, peace and harmony”.

Goldstone is not one to shy away from criticising Israeli policies, having headed the 2009 Goldstone Report – a United Nations fact-finding mission established to investigate possible Israeli human rights violations in Gaza – which was widely criticised as unfairly biased against Israel.

Human Rights Watch’s critics have also come from within. In 2009, Robert Bernstein, HRW’s founder, rebuked the organisation in The New York Times, accusing it of “issuing reports on the Israeli-Arab conflict that are helping those who wish to turn Israel into a pariah state”. He further claimed Human Rights Watch had lost its credibility “as a moral force in the Middle East”.

I’ve been to Palestinian towns. I’ve seen their suffering, and I – like millions in Israel and around the globe – desperately want to help. What Human Rights Watch misses, however, is that it will never come through propagating lies. And that’s the greatest tragedy of all.

Josh Feldman is a writer and activist for Jewish and Israeli issues, and writes independently of any organisations he is affiliated with. Connect with him on Twitter: @joshrfeldman