‘It spirals’: Why people panic buy during pandemic lockdowns

But after traipsing to four supermarkets in February in search of toilet paper – and without the convenience of a car – he became one of them. 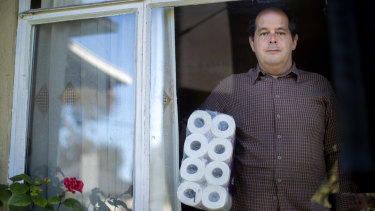 The 48-year-old now buys the household staple in bulk packs of 32 and always ensures his home in Melbourne’s south-west is well stocked.

“I was caught short and swore to myself that I was never going through that again,” said the Laverton resident, who is a full-time carer for his 70-year-old mother.

Panic buying is one of the more infuriating consumer trends to surface during the coronavirus pandemic. New research from the University of Adelaide reveals that panic buyers tend to be parents, female, younger than 55 and university educated.

The researchers surveyed 1000 Australian consumers during June and July last year and identified that around one in four were panic buyers.

Wendy Umberger, a professor of agriculture and food economics at the university, said panic buyers feared running out of food and had an above-average desire to plan ahead.

She also found they had high levels of trust in the federal government and were deeply concerned about providing for their families.

“Excess buyers are people who have a tendency to react negatively – with respect to emotions and behaviour – when faced with uncertainty,” she said. 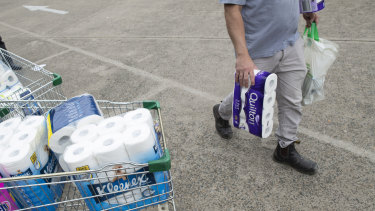 Australia’s hoarding of toilet rolls made overseas news early in the pandemic.Credit:Rhett Wyman

“In other words, people who are more likely to become anxious when there is a little bit of uncertainty in their day-to-day life.”

Professor Umberger said consumers panic bought due to deep psychological traits and supermarket purchasing limits were the most efficient way of curbing the behaviour.

“It’s human nature that they are being risk averse,” she said. “They are thinking about the ‘what if’ scenario.”

During the outset of the pandemic last March, supermarkets imposed buying restrictions on items including pasta, mince, flour, sugar, eggs and rice following a flurry of panic buying.

A Woolworths spokeswoman urged customers to be mindful of others in their community and “only buy what they need”.

But why the demand for toilet paper?

Deakin University senior lecturer in psychology Jeromy Anglim said toilet paper was one of the bulkier items in supermarkets so not as much could put out on display. 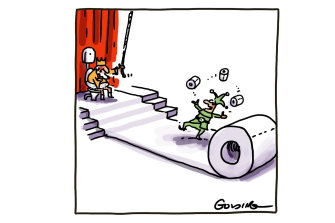 “Its perceived scarcity leads to more stockpiling,” he explained. “People don’t want to be the last person without toilet paper rolls so they grab another packet.”

It’s a question that baffles Mr Edwards, who said there was no shortage of toilet paper in Australia because it was predominantly manufactured in local factories.

He doesn’t own a car, so catches either a bus or a train to the supermarket and said carting home large packs of toilet paper was cumbersome.

“If COVID was a bowel condition, I’d get it,” said Mr Edwards. “But it’s a predominantly respiratory disease.”

It’s not just toilet paper that consumers have stockpiled during the pandemic.

Jocelyn Penington, a research assistant at the Walter and Eliza Hall Institute who lives in Melbourne’s north, found herself stocking up on ghee during Melbourne’s first lockdown last March.

She’d never cooked with ghee before but panicked when she went to the supermarket and discovered many of the shelves were bare.

“I was a bit spooked by all those empty shelves,” she said. “I was frustrated that I couldn’t buy what I intended.”

It turned out to be a fortuitous purchase and the mother-of-four has used up her ghee cooking curries and frying eggs.