Diwali, the Hindu festival of light, is marked by dazzling displays of fireworks and the lighting of millions of candles in houses and paths. It is a time for charitable giving, selfless service and to shine a light on oneself and others.

Last year, pollution emissions from the firecrackers alone contributed to the Indian capital New Delhi recording its worst air quality in years. This year, the air is still expected to be “very poor” during the five-days of celebrations which start on Thursday, even with a ban on fireworks.

Calls for a green Diwali, both in India and in the diaspora communities, have resulted in changes such as gifting plants to loved ones, avoiding plastic products, reusing holiday decorations and a complete ban on “the storage, sale and use of all types of firecrackers” until January – a measure Delhi’s Chief Minister Arvind Kejriwal said could be lifesaving. 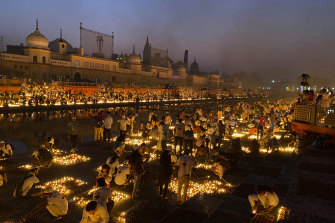 More than 900,000 earthen lamps are kept burning for 45 minutes on the banks of the river Saryu in Ayodhya, India, as part of Diwali celebrations on Wednesday evening for the city to retain a Guinness World Record.Credit:AP

City authorities rolled out a similar moratorium on fireworks last year, amid concerns that unsafe levels of pollution may facilitate the spread of coronavirus. Other states adopted similar policies, encouraging the public to cut back on fireworks. At the time, the South Asian country was reporting about 40,000 new COVID-19 cases a day.

Residents, however, flouted the ban. Sparklers lit up the Delhi night sky and crackles from explosive fireworks could be heard in many neighbourhoods, according to local media. Noxious fumes and debris from the fireworks, coupled with existing poor air conditions, shrouded the city in haze the following days, with the air quality index soaring to hazardous levels.

So far this year, police in Delhi have arrested 26 people and seized more than 4000 kilograms of fireworks in a crackdown on rule-breakers, according to local media. 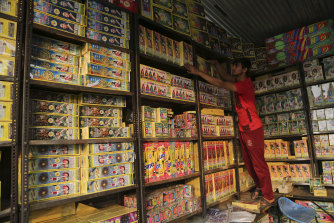 A man arranges packets of firecrackers for sale, on Wednesday the eve of Diwali, the Hindu festival of lights, in Jammu, India.Credit:AP

Gufran Beig, project director of India’s System of Air Quality and Weather Forecasting and Research (SAFAR), noted a gradual decline in firecracker use in recent years as “awareness of [the] ill effect of any kind of toxic firework” increases. But pollutant emissions from agricultural burning and fireworks may degrade the city’s air quality to “severe” this week.

Even if Delhi residents abide by the no-firecracker mandate this Diwali, forecaster SAFAR still predicts “very poor” air quality due to heavy pollution carried by wind from the rural farming regions north-west of the capital.

For years, some 29 million inhabitants in the greater capital area have suffered extreme air conditions in the autumn as villages set fire to straws in their freshly harvested rice fields to make room for wheat production, an outlawed practice that still persists. 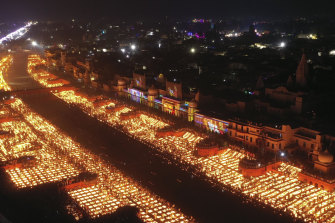 People light oil lamps on the banks of the river Saryu in Ayodhya, India.Credit:AP

Punjab and Haryana, agriculture-heavy states where smoke containing high levels of fine and coarse particles rise from rice fields every year, sit near Delhi’s borders. Agricultural fires contribute as much as half of all pollution in the capital on certain autumn days, studies have shown.

The Indian government has tried both carrot and stick policies to move farmers away from stubble burning: some received about $42 for every acre of farmland left untorched, while others were thrown in jail for failing to pay burning-related fines.

Despite the subsidies, the machines are expensive. Farmers also complain that they need to pay upfront and then claim subsidies later – a process that takes about 10 months. 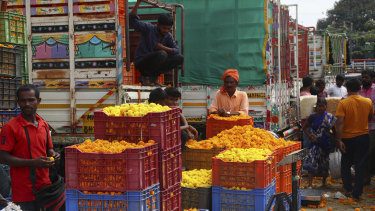 Marigold flower vendors wait for customers at a wholesale market ahead of Diwali in Hyderabad, India. Diwali is also known for its sweet treats and colourful patterns of flowers, rice or sand on the floor.Credit:AP

Reports from a government commission on air management say that rice field burnings have fallen compared with last year. But Beig, with the pollution-tracking agency, pointed to this year’s prolonged monsoon season, which brought rain and favourable winds, as partially responsible for the rare breath of fresh air Delhi residents enjoyed in October.

One of the most polluted countries in the world, India is also a top carbon gas emitter. During a Tuesday speech at the COP26 climate summit, Prime Minister Narendra Modi pledged to reach net-zero carbon emissions by 2070, setting India behind countries like China by a decade.

In Lahore in neighbouring Pakistan, not far from the border with India, the air quality index rose to 341, the worst in the world on Monday, according to IQ Air. On Tuesday, it dropped to 162.

In the winter months, industrial and vehicular emissions, smoke from brick kilns and crop stubble fires lead to a sharp spike in air pollution in Lahore, just as in India.

Get daily updates on the climate summit that will shape our future. Sign up to our COP26 newsletter here.