Home » World News » Kelly gangs up on the Queen, Bradman and Phar Lap

Kelly gangs up on the Queen, Bradman and Phar Lap

Phar Lap winning the Melbourne Cup, Sir Donald Bradman batting at the crease, the baby Queen Elizabeth and the Kelly gang feature in a remarkable collection of unique glass plate images dating back to the 1880s are up for auction online.

The items are all part of the Rose Stereograph Company Collection: one of Australia’s most significant photographic collections comprising some 7500 glass plate negatives. 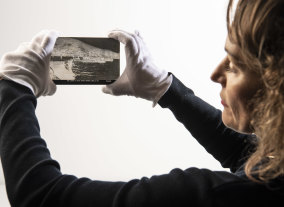 The Rose Stereograph Company Collection: one of Australia’s most significant photographic collections dating back to 1880.Credit:Wolter Peeters

There’s an array of Ned and Dan Kelly’s armour, taken during the outlaws trial in 1880. It’s arranged on what looks like the gravel path outside the Beechworth courthouse and, as photos go, perhaps a bit static. Phar Lap is shown winning the 1930 Melbourne Cup; another is the baby Queen Elizabeth on the lap of the Duchess of York, circa 1926.

Also in the running is lot 18, that’s Bradman at the crease; lot 3, is the landing at Gallipoli on Sunday morning, April 25; lot 51, Kirra Beach, Coolangatta, with not a highrise in sight.

Rose Stereograph was founded in 1880 by George Rose and Herbert Cutts and developed Australia’s first commercially viable photographic postcard business. It enabled the upwardly mobile of the 1900s to let their nearest and dearest know where they had been on their travels. It was the selfie of its time. 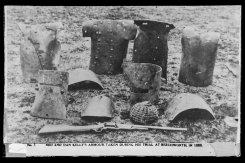 Glass plate negative of Ned and Dan Kelly’s armour taken during his trial at Beechworth in 1880. Credit:Wolter Peeters

Stephen and Jeffrey Cutts, the custodians of the collection said in a statement: “It is with great sadness that we say goodbye to a collection that spans five generations and 140 years. We understand that for these historically important pieces to rest with one family is to deny others the pleasure of their custodianship. It is for this reason that we have entrusted you [the bidders]as the new custodian of our treasured item.”

Amanda Benson, head of fine art and antiquities for Lloyds Auctions, said there are some great images available.

“There’s some incredible images of amazing international views but the image of the Kirra Beach surf club is at $551 and we expect it to go for much more than that. You are looking at a time capsule, probably 90 years ago when it was a completely different vista. It looks nothing like that now, it’s full of high rise apartments,” she said.

The lead bid is not surprising given the Ned Kelly story has been recognised internationally and been the subject of numerous movies. Even Sir Arthur Conan Doyle, author of the Sherlock Holmes detective stories, cited the Kelly armour in a letter to The Times shortly after the outbreak of the First World War regarding losses of Allied forces to German machine guns. 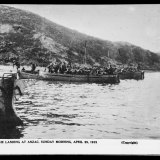 He wrote following an article in the newspaper about armour: “I am interested to see a column of The Times devoted to the subject. When Ned Kelly, the bushranger, walked unhurt before the rifles of the police clad in his own hand-made armour he was an object-lesson to the world. If the outlaw could do it, why not the soldier?”

Doug Morrissey, author of three books on the bushranger including Ned Kelly: A Lawless Life, said: “People like a bad boy, they like the myth that surrounds him. The truth is that he was a career criminal and everything he did, he brought on himself.”