‘King of Israel’ exists leaving behind prosperity and division

Jerusalem: He came to power like some conqueror from a distant land called Philadelphia.

Educated in the United States, speaking flawless East Coast English, warning in pungent sound bites about the threats posed by Islamic terrorism and a nuclear Iran, the Benjamin Netanyahu who stormed into Israeli politics in the 1990s was like no politician the country had ever seen.

Before long, he would capture the prime minister’s office, lose it, then seize it again a decade later, becoming Israel’s longest-serving leader and inspiring such admiration that supporters likened him to the biblical King David. His political agility got him out of so many tight spots that even his detractors called him a magician. 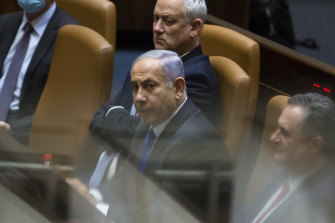 He presided over an extraordinary economic turnaround, kept the perennially embattled country out of major wars and kept casualty tolls to historic lows. He feuded with Democratic US presidents, then capitalised on a symbiosis with the Trump administration to cement historic gains, including the opening of a US Embassy in Jerusalem.

He compartmentalised the Palestinian conflict, snubbing the endless peace talks that had stymied his predecessors, unilaterally expanding the Jewish presence in the occupied West Bank and treating Palestinians largely as a security threat to be contained. 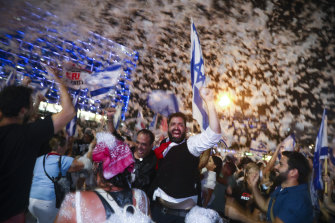 Israelis celebrate the swearing in of the new government in Tel Aviv.Credit:AP

Still, Netanyahu — who was ousted as prime minister on Sunday (Monday AEST) by a single vote 60-59 — has been a deeply polarising figure, governing from the right, branding adversaries as traitors, anti-Israel or anti-Semitic, obsessed with power and comfortable deploying street-fighter tactics to retain it.

The intuitive media savvy that sped his rise to power curdled in time into an almost narcissistic obsession. His efforts to control his image, including allegations that he bribed media executives for favourable news coverage, led to criminal charges that haunted his final years in office.

Even as he surpassed the tenure of David Ben-Gurion, Israel’s founding leader, in 2019, he drove Israelis to exhaustion with four elections in two years in which the main issue was him, and the electorate split down the middle each time. 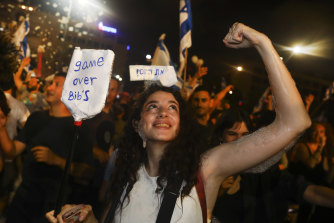 His insistence that only he was capable of leading the tiny but fractious country was called into doubt by his initial mishandling of the coronavirus pandemic, in which deaths and infections soared and disparities in the enforcement of lockdowns highlighted his indebtedness to ultra-Orthodox allies.

Still, he managed to turn that embarrassment into triumph by negotiating a deal for a vaccine supply that made Israel a global vaccination leader and brought a traumatised society back to life.

As he relinquishes power for the first time in a dozen years and nearly a quarter-century to the day after he first became prime minister in 1996 — and defiantly vowing to return for a third act — Netanyahu, 71, leaves Israel in many ways far stronger than he found it. The country has a globally envied tech industry, fearsome military, cutting-edge intelligence and counter-terrorism capabilities, diplomatic and trade relationships across Asia, Africa and Latin America that seemed unattainable a decade ago, and fast-knitting ties to Arab lands that were unfathomable even a year ago.

Netanyahu’s critics envied his political genius, but felt embittered by his failure to apply those gifts more courageously.

“He’s so capable, he could have done almost anything,” said Ben Caspit, an Israeli columnist and two-time Netanyahu biographer. “If he had brought the Israeli public a peace treaty, he’d have gotten it approved by 80 per cent. He could have been the king of the centre. But he’s not brave enough.”

That failure, however, was considered a wild success by his admirers on the right, who credited him with having blocked a Palestinian state and, as his former education and interior minister, Gideon Saar, put it, “rescued us” from the mid-1990s peace process.

Palestinians could only look on in awe at Netanyahu’s ability to cast Israel as ever the victim, despite its violent and repressive occupation, and at what they saw as his cynical gaming of the peace process to expand West Bank settlements rather than give up territory.

Netanyahu argued that he had been right all along: Failure to reach a deal with the Palestinians or to curb West Bank settlement had not and would not lead to a devastating “diplomatic tsunami”, as left-wing critics had warned. Israel could perpetuate the occupation without paying a price in international legitimacy.

“What tsunami? What isolation?” he crowed in 2017. “What foolishness.”

Netanyahu, known to all as Bibi, was practically a newcomer to Israel when he made his first run for office in 1988. The son of a right-wing Zionist scholar, he attended high school in Philadelphia, college at the Massachusetts Institute of Technology and worked as a consultant in Boston before being recruited as an Israeli diplomat and sent to Washington. In 1984, he moved to New York as Israel’s ambassador to the United Nations, where he became a regular on shows like Nightline and Larry King Live.

With such star power, he blew past veteran Israeli politicians on his way up the ranks. He won more acclaim during the 1991 Gulf War, being interviewed live on CNN in a gas mask as missile-warning sirens howled, and holding court as Israel’s spokesman at the Madrid peace conference. In 1993, at age 43, he won the leadership of the conservative Likud party.

Only after a Jewish extremist massacred 29 Palestinians and Palestinians responded with a wave of suicide bombings did public opinion turn his way. But his appearances at rallies where crowds chanted “Death to Rabin” stained him, fairly or not, as having fuelled and fed on the incitement that led to Rabin’s assassination in 1995.

Undeterred, he took on Rabin’s successor, Shimon Peres. After a masterly performance in their only debate, Netanyahu scored a narrow upset.

The opening of a tunnel under the Western Wall, over the objections of Muslim clerics, set off deadly gunbattles between Israeli and Palestinian security forces. Chastened, Netanyahu agreed to pull troops back from the West Bank city of Hebron, prompting the right wing to desert him. When the poisoning of a Hamas leader was botched in Jordan and the would-be assassins caught, a humiliated Israel was forced to supply the antidote and release Hamas’ spiritual leader and dozens of other Palestinian prisoners.

His defeat in 1999 was not the end of his troubles. The police accused him of using state money to fix up his private homes, and his wife, Sara, was forced to return hundreds of gifts she had taken from the prime minister’s residence.

But Netanyahu retained his cachet in Washington, where he testified before Congress in the run-up to the Iraq War. “If you take out Saddam, Saddam’s regime,” he argued, “I guarantee you that it will have enormous positive reverberations on the region.”

Netanyahu was on surer ground when prime minister Ariel Sharon named him finance minister in 2003.

When Sharon quit Likud to form a centrist party, Netanyahu reclaimed the Likud leadership. But the working-class and ultra-Orthodox voters whose benefits he had gutted exacted payback. Likud won just 12 seats in parliament in 2006, its worst showing in half a century.

Netanyahu’s critics say he drew a simple lesson. Forced to choose between accomplishing great things and retaining power, he would choose power every time.

By the time the next election came, in 2009, Netanyahu had forged a new compact with ultra-Orthodox leaders.

He was narrowly edged by former foreign minister Tzipi Livni, but the right-wing and religious parties denied her a coalition and fell in behind him, restoring him to the premiership.

Only once did Netanyahu later turn his back on the ultra-Orthodox; in 2013, he entered a coalition with Livni and Yair Lapid’s centrist Yesh Atid party. But when Livni and Lapid backed legislation that threatened Israel Hayom, Netanyahu called a new election. His next government would be the most right-wing and religious in Israel’s history.

There was a time when Netanyahu was so popular in the United States that some said he could be elected president. A 2015 poll found Republicans admired him as much as Ronald Reagan and more than the pope. 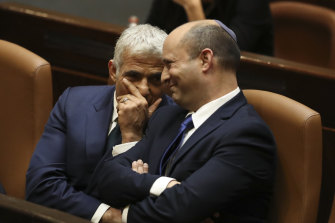 Israel’s new Prime Minister Naftali Bennett, right, sits with Yair Lapid during a Knesset vote to oust Netanyahu. Bennett will serve for the first two years and Lapid for the next two of the unity government’s term.Credit:AP

He put that popularity to the test in his crusade to block the 2015 Iran nuclear deal. Styling himself a latter-day Churchill, Netanyahu had been sounding the alarm about Iran’s nuclear program for 20 years. He kept the world guessing about whether Israel would mount a preemptive strike, as it had done in Iraq and Syria.

It remains unclear whether the tacit threat was serious or an elaborate bluff. But while it helped pressure the US and Europe to step up sanctions against Iran, critics said it also spurred then president Barack Obama to seek a deal with Iran before the sanctions brought Iran to its knees.

To the Likud base, Netanyahu remained “Bibi, king of Israel,” as they had long serenaded him.

But devotees were not enough. Four times in the past two years, he fell short of a parliamentary majority, despite aligning with an extreme-right anti-Arab party and then courting the very Arab voters he had once demonised.

Netanyahu had long been seen as a treacherous partner, having repeatedly humiliated those who posed potential threats. His final act smacked of comeuppance, as several former proteges, including erstwhile right-wing allies, united to depose him, with an Arab party providing a crucial assist.

What all his adversaries could agree on was that Netanyahu’s flailing posed too great a threat to the country’s internal cohesion, and thus its security — and that what was indispensable to both was that he should go.