The rising figures come as Brazil, which has become the hotspot of South America’s outbreak, registered a record 33,274 new cases of Covid-19 on Saturday.

The latest figures, which bring the total number of cases in Brazil to 498,440, come as Latin American countries brace themselves for difficult weeks ahead as the disease spreads rapidly across the region.

In Brazil, which has now reported 28,834 deaths, disagreement among leaders over lockdown measures has hampered efforts to slow the virus. 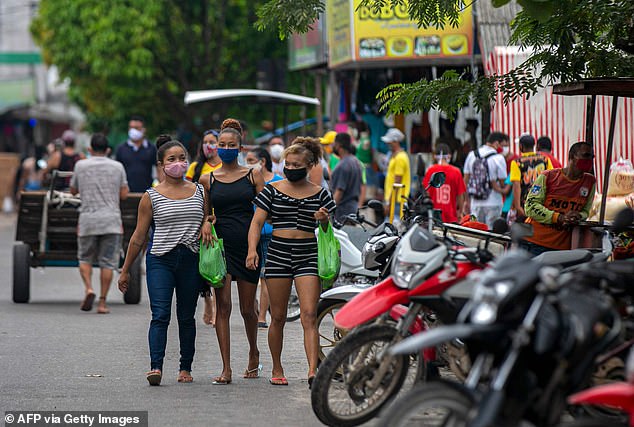 People wear face masks as they walk through the street in Breves, a municipality in Brazil, amid the coronavirus outbreak 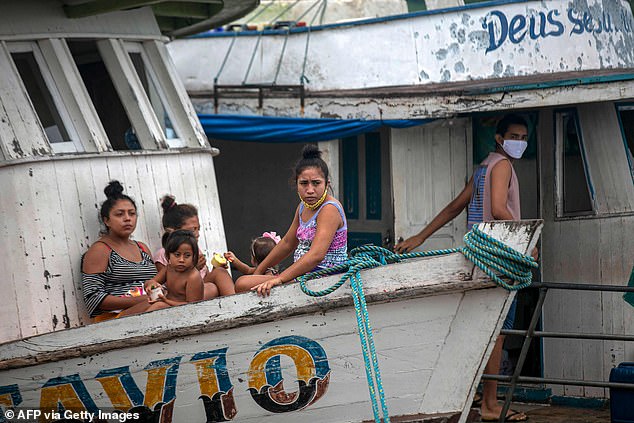 A group of people sit inside a boat in Breves, Brazil, as the country sees a surge in the number of coronavirus cases 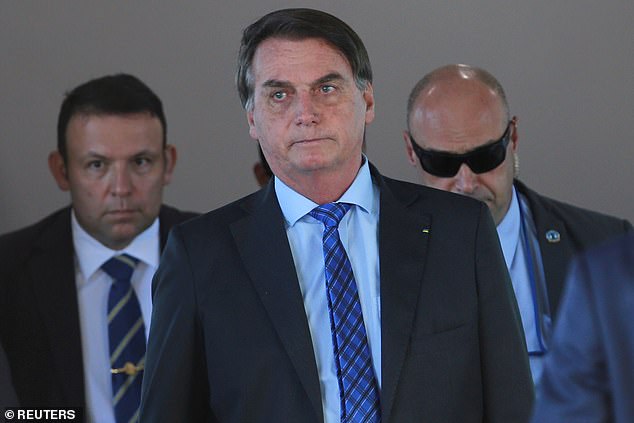 President Jair Bolsonaro, who fears the economic fallout from stay-at-home measures will be worse than the virus, has berated governors and mayors for imposing what he calls ‘the tyranny of total quarantine.’

Elsewhere Colombia issued new measures to control the coronavirus spread in three of its most affected cities on Saturday, including the capital Bogota, as the rest of the country prepares for quarantine rules to start lifting.

As the global death toll from the pandemic surpassed 368,000, US President Donald Trump’s decision to permanently cut funding to the World Health Organization has been broadly criticised.

‘Now is the time for enhanced cooperation and common solutions,’ the European Union said in a statement, adding: ‘Actions that weaken international results must be avoided.’

Trump initially suspended funding to the WHO last month, accusing it of not doing enough to curb the early spread of the virus and being too lenient with China, where COVID-19 emerged late last year.

However on Friday he moved to make that decision permanent in a major blow to the agency. The U.S. is the WHO’s biggest contributor, supplying $400 million last year.

German Health Minister Jens Spahn said the ‘disappointing’ decision was a setback for global health, while Chancellor Angela Merkel declined to attend an in-person G7 summit that Trump had suggested he would host.

Richard Horton, editor of The Lancet medical journal, said it was ‘madness and terrifying both at the same time.’

As the virus progresses at different speeds around the globe, there has been pressure in many countries to lift crippling lockdowns, despite experts’ warnings of a possible second wave of infections.

In Britain, which is set to begin lifting its lockdown on Monday, senior advisors to the government warned that it was moving too quickly.

‘COVID-19 spreading too fast to lift lockdown in England,’ tweeted Jeremy Farrar, a member of the government’s Scientific Advisory Group for Emergencies.

Meanwhile India said on Saturday it would begin relaxing the world’s biggest lockdown in stages from early June, even as it marked another record daily rise in infections. 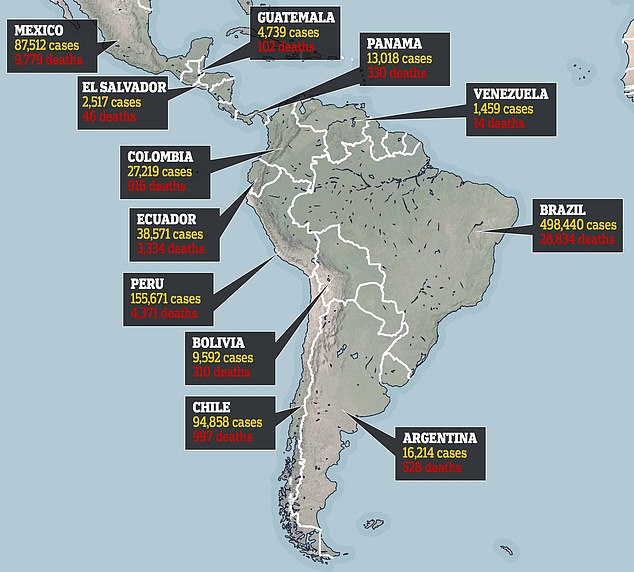 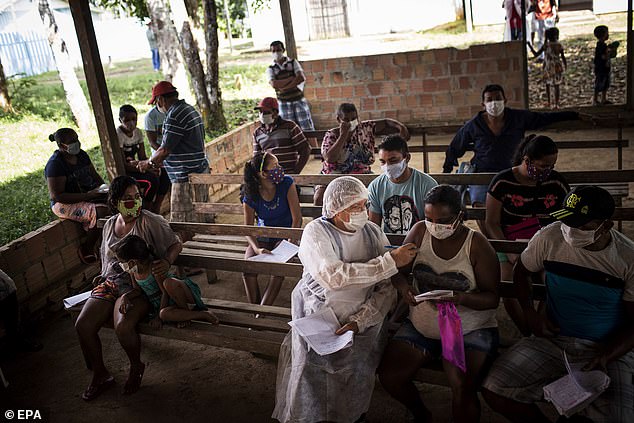 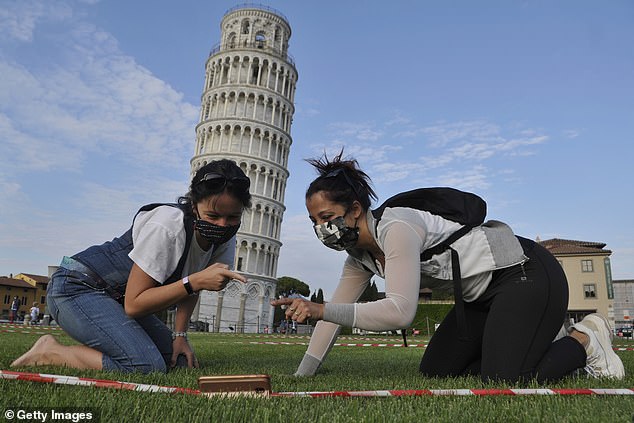 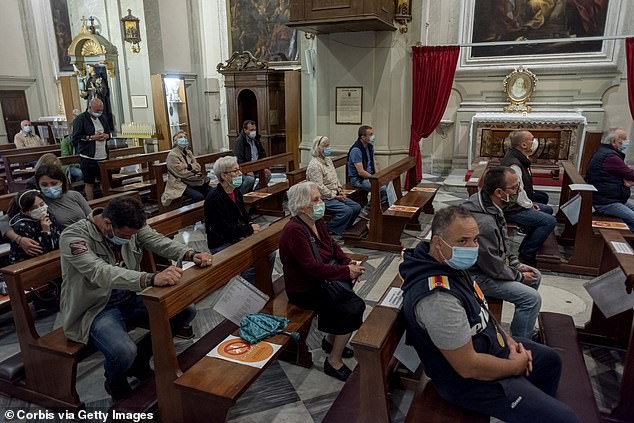 In Rome, Italy, worshippers congregate at for mass in the church of Sant’Agata in Trastevere 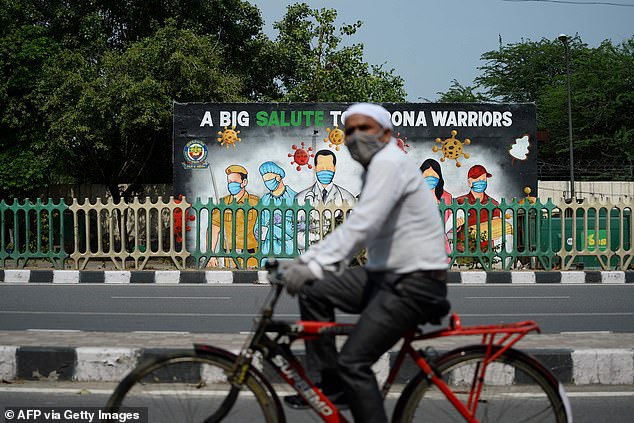 A man in New Delhi, India, cycles past a garbage dump reading ‘a big salute to corona warriors’ as the country begins to ease its lockdown measures

India’s Prime Minister Narendra Modi warned the country to remain vigilant against coronavirus as the country prepares a phased re-opening of activities.

Iran meanwhile announced that collective prayers would resume in mosques, despite infections ticking back upwards in the Middle East’s hardest-hit country.

Jerusalem’s Al-Aqsa mosque compound, the third-holiest site in Islam after Mecca and Medina in Saudi Arabia, reopened to worshippers on Sunday.

With infection numbers falling in many of Europe’s most affected countries, the push to restart economies was gaining steam.

Italy’s Leaning Tower of Pisa reopened on Saturday, while in Paris, parks and the famed Galeries Lafayette department store flung open their doors.

In Austria, hotels and cinemas were allowed to take in customers, provided they wear masks.

Across the Atlantic, the US capital Washington resumed outdoor dining, while on the West Coast, restaurants and hair salons in Los Angeles reopened.

New York City, the worst-hit American city with about 21,500 coronavirus deaths, is on track to begin reopening the week of June 8.

Global sport has also started to rev back into action, with Austria announcing it will host Formula One’s delayed season-opener on July 5, and the NBA eyeing a July 31 return. 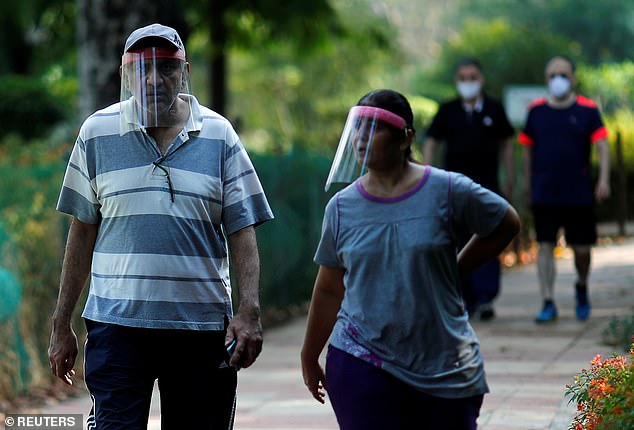 People wear protective face visors as they walk through an outdoor space in New Delhi, India 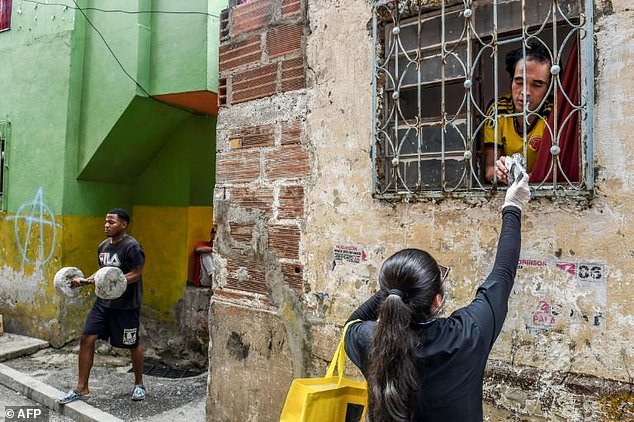 A health worker issues face masks to residents in the Santa Cruz neighbourhood of Medellin, Colombia 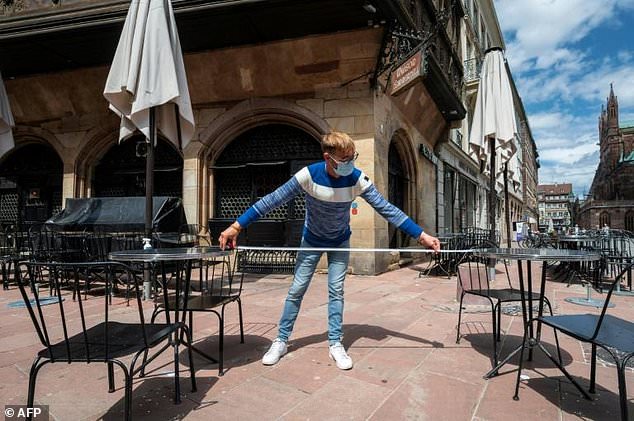 A member of staff measures the distance between tables at a restaurant in Strasbourg, France 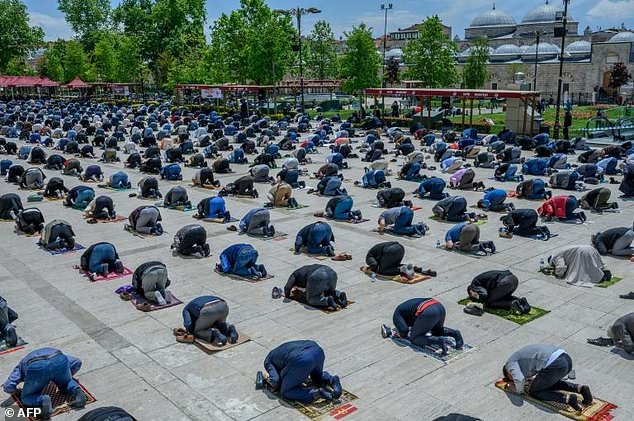 But the economic damage from weeks of lockdowns continues to pile up, with Chile and Peru securing credit lines worth billions from the IMF.

India’s economy grew at its slowest pace in two decades in the first quarter, while Canada, Brazil, France and Italy also saw their GDP figures shrink ahead of an expected worldwide recession.

As the virus hits the world’s poor particularly hard, Pope Francis called for a ‘more just and equitable society’ in the post-coronavirus world and for people to act to ‘end the pandemic of poverty.’ 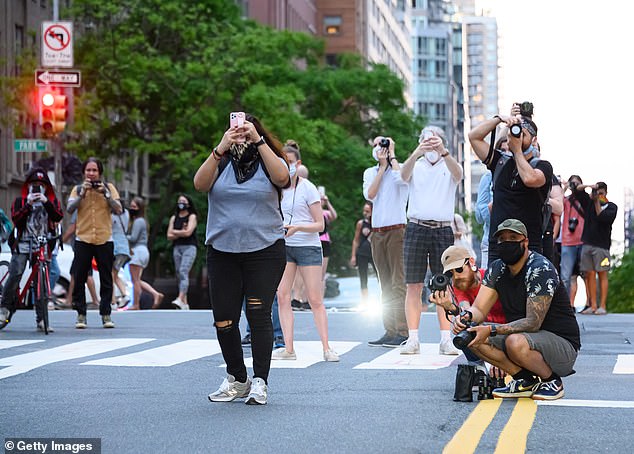 Member of the public watch Manhattanhenge in New York as the U.S. continues to control the spread of the outbreak 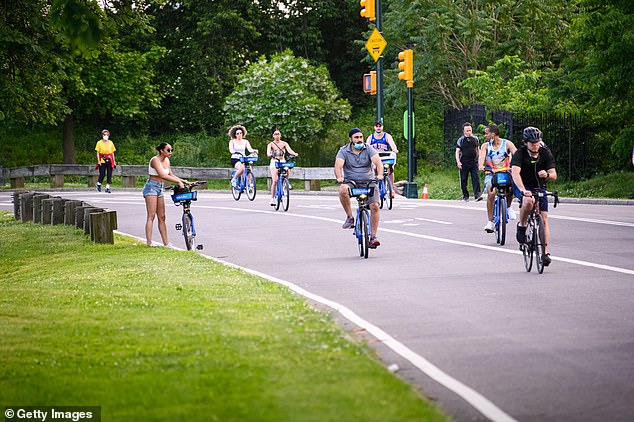 A group of cyclists ride their bicycles in Central Park , New York, during the coronavirus pandemic

‘Without food donations, I’ll have to fight harder for my family to survive,’ said motorcycle taxi driver Thanapat Noidee in the tiny hut he shares with his wife and children in Bangkok.

Even the animal world has not been left untouched by the pandemic.

Gibraltar has banned tourists from touching the British enclave’s famous Barbary macaques over fears they could spread coronavirus.

Singapore’s beloved otters meanwhile have been popping up in unexpected places during the city-state’s lockdown, but their increasingly daring antics have angered some and even sparked calls for a cull.

‘I simply don’t understand anyone who could not like them. They are really cute,’ said 35-year-old Singaporean Pam Wong.