Leong was expecting $9600 in bonuses. Now his Uber account’s at zero

Transport giant Uber has withdrawn bonuses of up to $12,000 paid to some couriers who referred new workers to the service, claiming they were obtained fraudulently, but restored others that were cancelled in error.

Two riders who spoke to The Sydney Morning Herald and The Age say they spent weeks signing up friends and acquaintances because the bonuses, worth up to $600 for each person referred, paid better than driving or riding. They are crushed the promised rewards have been cancelled. 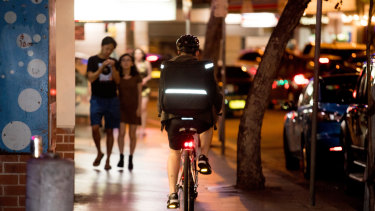 Uber cancelled thousands in bonuses it had assigned to some riders.Credit:Cole Bennetts

“I’m very angry because Uber is a big company,” said driver Leong Heng Ooi through a Mandarin interpreter provided by the Transport Workers’ Union. “It’s a whole year’s earnings after I pay my rent and bills,” said Mr Ooi, who has received only $1200 of the $9600 in bonuses he estimates he has earned.

Other drivers reported their bonuses were repaid along with notes from the company such as: “The incorrect negative amount added, correcting it by a positive amount.”

Uber and other gig economy companies have come under pressure from Labor and the unions over classifying staff as independent workers who get more flexibility but lack a minimum wage, unfair dismissal protections, forums to quickly and easily challenge underpayments, and traditional workers’ compensation.

Under Uber’s bonus promotion, only people who had never driven for the delivery giant were eligible to be referred and they had to complete a minimum number of trips. Once someone met the conditions, both they and the referrer received up to $600 into their Uber app.

An Uber spokesman said an audit of the program had uncovered a small number of people who had claimed payments they weren’t entitled to. In these cases, it had suspended the app’s cash-out function and if the money had already been paid, it displayed a negative balance.

“Regrettably, there was also a small number of accounts that were identified in error. These accounts were subject to the same freeze on the referral incentives,” the spokesperson later added.

He apologised for the “inconvenience and stress this may have caused” and said those affected would be credited the correct amount.

“All earnings made legitimately through the platform, such as completed trips or tips, remain untouched, visible and available for withdrawal,” the spokesman said.

TWU national secretary Michael Kaine wrote to Uber on Monday to complain about its actions, which he claimed had left some workers with thousands of dollars of debt in their Uber accounts.

“Riders are already dealing with the harmful and even fatal consequences of a ‘take it or leave it’ approach to gig work. This week, Uber has hit a new low with a ‘take it, but we can take it right back’ approach,” he later said.

Neither Mr Ooi nor another Uber driver, Adrian Leong Sieng Wong, whose account showed a $10,000 deduction, have worked for Uber since their balances were altered because they said they did not have faith they would be paid.

“It’s just another illustration of the vulnerability of these particular drivers,” said Professor Riley Munton, who stressed she could not comment on who was right in the dispute.

She said employees could generally bring workplace disputes to the industrial tribunal and seek help from the Fair Work Ombudsman rather than having to go to the court themselves. Independent contractors do not have those protections as they are not considered “employees” under the Fair Work Act.