‘Making a day of it’: Caulfield Cup devotees swap crowds for at-home celebrations

Though it was a very different Caulfield Cup this year, one constant reminded racing lover Angela Menz that even during a pandemic, some things don't change.

"From past Caulfield Cups, I always expect bad weather," said Ms Menz with a laugh. "So it isn’t a huge surprise."

But patchy conditions and a ban on trackside crowds didn't deter the 36-year-old and many others from getting into the spirit of the race from their homes. 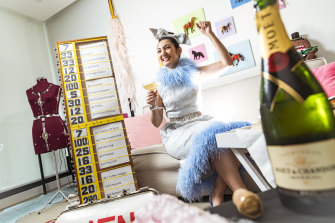 A vintage bookie bookies board was among the decorations Angela used to get into the racing spirit. Credit:Chris Hopkins

For Ms Menz, it meant dressing up, decorating her Abbotsford apartment and preparing a feast with her husband.

"It's definitely weird. I do feel a bit sad that obviously everything is going ahead without crowds. But I’m really glad it’s going ahead," she said. "We are really making a big day of it.

“I've been going to the races since I was little, and we have been watching races at home on TV since March, every weekend." 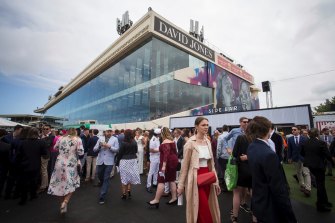 Crowds at the 2018 Caulfield Cup.Credit:Paul Jeffers

Saturday's decorations included vintage bookies boards and bags, and horse-themed artworks Ms Menz made herself on the wall.

This year would have marked her 15th time attending the Caulfield Cup, which she says has its own distinct character compared to other spring races.

"I think it's got a young kind of buzz about it when you're on track," she says. "A young, frenetic energy."

Ms Menz is already looking forward to the day when Melbourne's racetracks open their gates to crowds again.

Racing is one of the few sports which has continued in Victoria during the state's second wave of coronavirus, despite a ban on crowds.

Domestic wagering turnover for last weekend's Caulfield Guineas Day was $104 million, up 20 per cent on the previous year, according to Melbourne Racing Club chief executive Josh Blanksby, reflecting Melburnians' desire to be involved in the carnival, even from a distance. 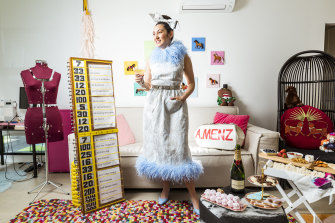 Racing enthusiast Angela Menz has been making a special effort to get in the spirit of the races for the Caulfield Cup. Credit:Chris Hopkins

Ms Menz put her money on Finche to win, but it was Verry Elleegant that landed the $5 million prize on Saturday, delivering champion trainer Chris Waller his first Caulfield Cup.

The celebration of fashion was conducted online with racing fans sending in images of their outfits and celebrations to Social Style Stakes, a competition run by Melbourne Racing Club. The winner will be announced on Sunday.

In another twist from tradition, the trophy was delivered by a senior nurse educator, Deborah Ward, who was nominated by a friend for her work providing critical care to patients with COVID-19.

Crowd numbers at the Caulfield Cup, which is the world's richest 2400-metre handicap, have hovered around 30,000 for the past decade.