But when the first of what would become four lockdowns began in March last year, his housemate asked him for a trim. “He was about to go back to the United Kingdom and he wanted some of his hair gone for the flight,” the 30-year-old says. 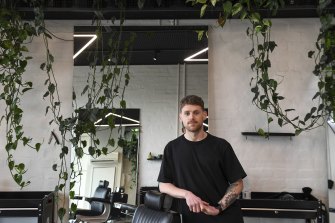 Mark Drake at Paragon Studio in Armadale where he is training to be a barber.Credit:Penny Stephens

“I was using my beard trimmer and he ended up with quite a good haircut. If that went badly I probably wouldn’t have done any more.”

More than a year and several lockdowns later, Mark is still giving haircuts. The former hospitality worker is currently training to be a professional barber – a career that wasn’t on his radar before lockdowns began.

“There was no chance I would have been cutting hair,” he says.

For many people living in Victoria, probably most, lockdown has not been a pleasant experience.

The challenges are well-documented: uncertainty, economic devastation, isolation from friends and family, the stressful juggle of homeschooling with remote work.

And there are already reports of fatigue and an increased toll on people’s mental health from the latest restrictions.

But for some, lockdown has also offered a chance to reset and try something new; to bed down a positive habit or get rid of an unhealthy one. For Mark, it gave his life a new direction.

After practising on friends and documenting his efforts on Instagram, Mark recently took up a job at barbershop Paragon Studio in Armadale. He’s still giving free trims for another few months until his training is finished.

“I’m from a small place in the UK — the Isle of Wight. There’s not much going on down there, I managed a sports store and worked in a bike shop. If you’re not working in the factories, that’s what you do,” he says.

“I was looking for a career but I was a little bit lost. I’m a bit creative and this has been quite exciting.” 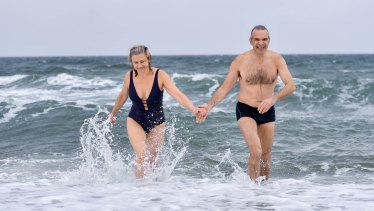 Mikhail and Natasha Anossovitch are keeping up the cold watrer swimming they started during lockdown.Credit:Joe Armao

IT professional Mikhail Anossovitch and his wife Natasha took their own plunge and tried cold water swimming for the first time when Melbourne entered lockdown 1.0.

Almost every day since, the pair have been at Elwood Beach for a dip in Port Phillip Bay, even right through last winter.

“What we found is that it gave us this sense of feeling really good,” says Mikhail, 51.

“I would say we almost got close to being addicted — the longer we stayed in lockdown the more both of us wanted to go and swim.”

Each session doesn’t last that long, perhaps five minutes or a bit more. But there are no wetsuits to be seen, just a pair of bathers. Towards the end comes the hard bit when the head goes under the water.

“Out of all these many unpleasantries suddenly we have a hobby which we can explore,” he says.

“In July, when you swim in Elwood you turn heads. When they see you walk with the towel there’s this look ‘Is he really going to do it?’ and it was ‘Yep’.”

Primary school teacher Ann Nguyen, 32, wanted to stay healthy after seeing the early stages of the pandemic wreaking havoc in China and Spain. 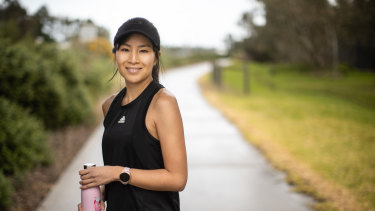 Ann Nguyen ramped up her running during the COVID lockdowns. Credit:Simon Schluter

She started a daily fitness diary, keeping it up for 36 weeks. Her way of staying fit was running.

“I think feeling so locked down, running was the only time I felt some freedom,” she says.

“I was doing about 50km every week during the long lockdown, I was out there every day. I had all these different routes, I know the roads around me like the back of my hand, especially where the hills are.”

Getting through the isolation of lockdown helped Ann realise how resilient she is, particularly living alone. She resolved never to take her health for granted again.

“A lot of people work so much, they are stressed. It really affects you,” she says. “Having a slower pace made me realise what’s important and what matters.”

Academic Matt Lawrence decided at the beginning of the second lockdown that he needed to give up the booze. Before that, he was drinking two or three beers a night and feeling unhappy.

“I found myself sitting there after Zoom meetings opening a can and not doing much activity,” the 35-year-old says.

Replacing an “alcohol dependency with a cycling addiction” helped Matt lose close to 30kg. The last six-pack he bought before quitting is still sitting in the fridge. He now prefers water or fresh orange juice.

Not waking up with a hangover is the “best thing ever”, says Matt, allowing him to rise early to get on the bike. The money savings are a nice bonus too.

He gets the odd bit of peer pressure but most people have welcomed his choice because the benefits have been so noticeable.

“Australians will often say things like ‘you’re missing out, what are you doing?’,” he says. “They’re right, one probably wouldn’t hurt. But I don’t need it. It’s fine.”