Surveillance video from a Maryland business shows one of two critically wounded Navy sailors staggering inside the establishment moments after he was shot Tuesday near the Army base where he is assigned.

Authorities said Fantahun Girma Woldesenbet, 38, a Navy Hospital Corpsman, began shooting a rifle at an office park before driving 10 minutes away to Fort Detrick, where he was killed by personnel.

Moments after the shooting, the wounded sailor entered Nicolock, a paving manufacturer, in uniform and appeared to warn two men behind a counter of what was happening. He then opened a door and entered a room. 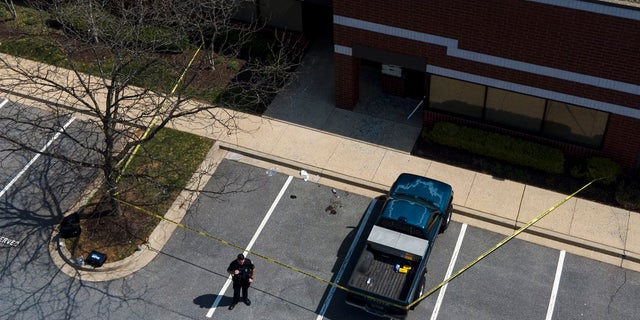 An official stands near a taped-off area near the scene of a shooting at a business park in Frederick, Md. (AP Photo/Julio Cortez)

The two men walk to the front door and appeared to lock themselves in. Calls to the Nicolock location from Fox News were not answered.

Investigators have not determined a motive for the shooting. U.S. Army Garrison Fort Detrick announced that the suspect “breached the Nalin Pond gate located off of Opposumtown Pike,” and made it onto the base, where he was fatally wounded.

One of the wounded sailors was released from a hospital hours later and the other remained in critical condition, the Navy said. 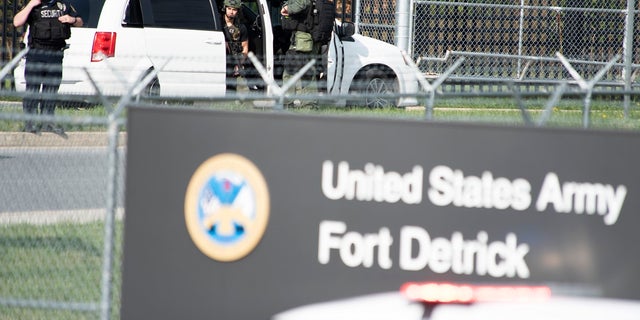 Members of the Frederick Police Department Special Response Team prepare to enter Fort Detrick at the Nallin Farm Gate in a convoy of vans and sedans, following a shooting in the Riverside Tech Park Tuesday morning in Frederick, Md. (Graham Cullen/The Frederick News-Post via AP)

In a statement, the Navy said it was sending “our deepest condolences to all affected by this terrible act of violence and will continue to support the investigation.”

Fort Detrick is home to the military’s flagship biological defense laboratory and several federal civilian biodefense labs. About 10,000 military personnel and civilians work at the garrison, which encompasses about 1,300 acres in the city of Frederick.