Masks should go, experts say, as ‘ring of steel’ is abolished

Premier Daniel Andrews has dropped Victoria’s state of disaster, disbanded the crisis committee of cabinet and after 124 days opened the “ring of steel” which had kept Melburnians out of the regions as a reward for a ninth day in a row of no new coronavirus cases and no deaths.

But the loosening of restrictions remained typically cautious, with only two people plus dependents allowed to visit the homes of others, strict limits remaining on the number of people allowed in cafes and restaurants, and masks still compulsory, even outside – a decision questioned by two leading epidemiologists.

Just four known active cases now remain in Victoria, and as part of his government’s “road map to reopening”, Premier Daniel Andrews on Sunday announced that cinemas, theatres and art galleries could reopen. The 25-kilometre limit on travel from home for Melburnians was also lifted.

"Today is a day to be proud as Victorians of what we have been able to achieve," said Mr Andrews, who also outlined further easing of restrictions to begin in a fortnight.

In August, just prior to Victoria recording a peak of 725 new daily coronavirus infections, Mr Andrews announced a “state of disaster”. On Sunday, the government dropped that designation, although the state of emergency established in March was retained. 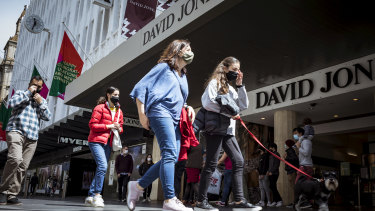 Professor Blakely in August was part of the Melbourne University and University of New England team that modelled 1000 different scenarios and found Victoria needed to remain in strict lockdown until October if it was to have the best chance of suppressing the virus.

A third epidemiologist, Professor Michael Toole from the Burnet Institute, said masks were “a proven effective measure that was cheap and easily available”. Like Mr Andrews, he said they should be retained for the long haul.

Victoria’s Chief Health Officer Brett Sutton defended keeping masks in place across the state. "They are useful because they reduce transmissions from anyone who might have an infection. And we don’t know the actual case load out there."

Mr Andrews also said masks would remain. "Whether it's wearing a mask, washing hands, coughing into the crook of our arm, following the rules, as difficult and frustrating as they may be, that is what has got us to be able to be open," he said.

In a statement on Sunday, the Police Association welcomed the dropping of the “ring of steel” around Melbourne.

"This will come as a relief to our members who, for a large part of this year, have been placed in the unenviable position of upholding restrictions which have impacted the lives of so many Victorians,” the statement said. "Our members look forward to moving off checkpoints and back into police stations and communities.”

There are just two cases in the state with an unknown source and only two people in Victoria are in hospital with COVID-19; neither is in intensive care. There were 16,865 tests completed on Saturday.

Professor Sutton said it was "possible" the state was at the point of eradication of the virus.

"I think we shouldn't work on that assumption because that would change the way we behave and the way we're going about testing," he said.

Mr Andrews said he wanted to note "how impressive it is that Victorians have built something that is not only unique in our country but is of international significance".

"To have gone from more than 700 cases a day to nine days of zero cases in a row is a particularly impressive thing and something every single Victorian should be proud of," he said.

Business groups largely welcomed the latest easing of restrictions. The Victorian Chamber of Commerce and Industry called for more clarity on when office workers might return to Melbourne’s city centre.

"There is still more work to be done on a plan for the return of functions and events, as well as office workers," chief executive Paul Guerra said. "Victoria needs a road map for the safe return of office workers to revitalise the CBD."

Australian Industry Group Victorian head Tim Piper said the removal of workforce restrictions for manufacturers was positive and called for other states to open their borders to Victorians. "The easing is most relevant for abattoirs and meat processing plants, poultry and seafood processing," he said. "Other states should now reopen their borders to Victoria as the state has achieved nine consecutive days of zero cases in what is a remarkable turnaround."

Melbourne University’s Professor Blakely also said that Victoria now needed to question whether to retain bans on travellers coming into the state from some Asian countries that had tackled the virus successfully to enter.

This included countries such as South Korea, China, Taiwan, Hong Kong and Singapore.

The Burnet Institute’s Professor Toole said it was time to open up Victoria to both New Zealand and some other Pacific islands, such as Vanuatu.

“Vanuatu has never had a case. Australians like going to Vanuatu and it is suffering from a lack of tourism,” he said. He also said Victoria could consider opening to countries like Taiwan and Vietnam that had successfully tackled the virus.

“Taiwan is the safest country in the world [for coronavirus] right now, so we could open to them,” he said.

He also said China had "basically got it under control. … So opening to China could be considered”.