A police union in Miami shared a year-old photo of Chief Art Acevedo appearing to flash the same “OK” hand gesture he suspended an officer for using last week amid allegations it represented “White power.”

“‘Do as I say not as I do’ I guess it [is] what we should get used to from now on,” Miami Fraternal Order of Police Lodge 20 tweeted, sharing an image of Acevedo when he was still Houston’s police chief. 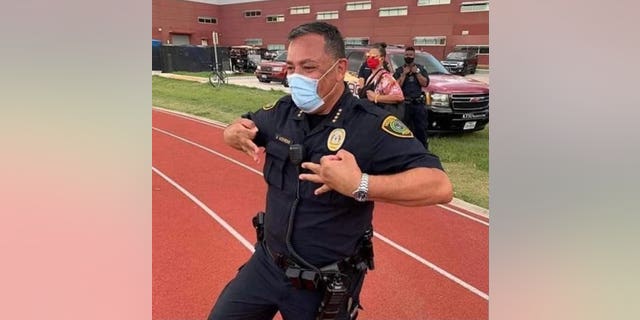 The photo shows Acevedo during a visit to Jack Yates High School in Houston last summer. That’s the same high school George Floyd graduated from in 1993, and Acevedo visited on June 13, 2020 for a memorial following Floyd’s death in Minneapolis, which prompted nationwide protests and rioting.

Acevedo is seen using a gesture called the “tre,” which represents Houston’s Third Ward, Miami Mayor Francis Suarez explained to WSVN, arguing it “had nothing to do with White power.”

But Miami Fraternal Order of Police President Tommy Reyes said the hand symbols Acevedo is making “are the same exact” of those Miami Police Officer Daniel Ubeda is making in a different photograph for which he was relieved of duty. Acevedo launched an internal affairs investigation into Ubeda after a commander tweeted a photograph earlier in the week of his officers following a drug bust. 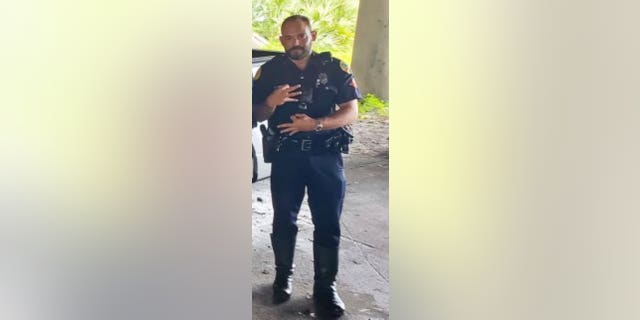 The photo shows Ubeda and six other uniformed officers standing in a line. Ubeda appears to make the “OK” symbol with both hands, displaying three fingers on each. Reyes said Ubeda was referencing the six other colleagues on his shift, and the hand gestures were meant as an “internal joke” with his co-workers.

But the Anti-Defamation League said the “OK” hand gesture, an ancient symbol used to indicate consent, approval or well-being, has been co-opted by White supremacists in recent years to represent the letters “wp,” which are meant to stand for “White Power.”

The commander who tweeted the photo is Black, Reyes said. The photo was taken down within 48 hours of the controversy, and the commander has since made his Twitter account private.

Ubeda was the same officer who went viral last October for wearing a face mask emblazoned with the message “Trump 2020 No more bull****” while in police uniform at a polling station. He was reprimanded over the incident for breaking policy prohibiting political messaging while in uniform, WPLG reported.

In a letter sent last week, the union president demanded Acevedo reinstate Ubeda to his full duties, clear him of any wrongdoing and apologize, categorizing the chief’s move to suspend the officer as a “knee jerk reaction.”

“This impulsive behavior has become a normal occurrence here at the Miami Police Department in the last four months since your arrival and is unacceptable,” Reyes said.