Millions of Britons step out onto their doorsteps, balconies and front gardens for the seventh weekly ‘Clap for Carers’ event to pay tribute to NHS staff and key workers in the battle against coronavirus

Millions of Britons took part in the seventh weekly ‘clap for carers’ tonight to thank NHS staff and healthcare workers putting their lives on the line in the fight against coronavirus.

Clap for Carers is now in its seventh week, with Britons up and down the country stepping onto their doorsteps, balconies and front gardens to applaud frontline workers at 8pm every Thursday.

Alongside members of the public, politicians, celebrities and the emergency services took part in tonight’s clap, including Boris Johnson who stood outside Downing Street at 8pm to lead the applause.

He tweeted video of himself applauding, saying: ‘Thank you to all of our carers for your fantastic work, day in, day out. You are pillars of society in the fight against coronavirus.’

Scottish First Minister Nicola Sturgeon tweeted a picture of herself clapping, adding: ‘To our NHS and care workers, and to everyone doing essential work to keep the country going at this time…thank you so much’

Labour leader Sir Keir Starmer tweeted: ‘Another emotional moment as the country comes together to clap for our key workers, our carers and all those keeping our country going through this crisis.’ 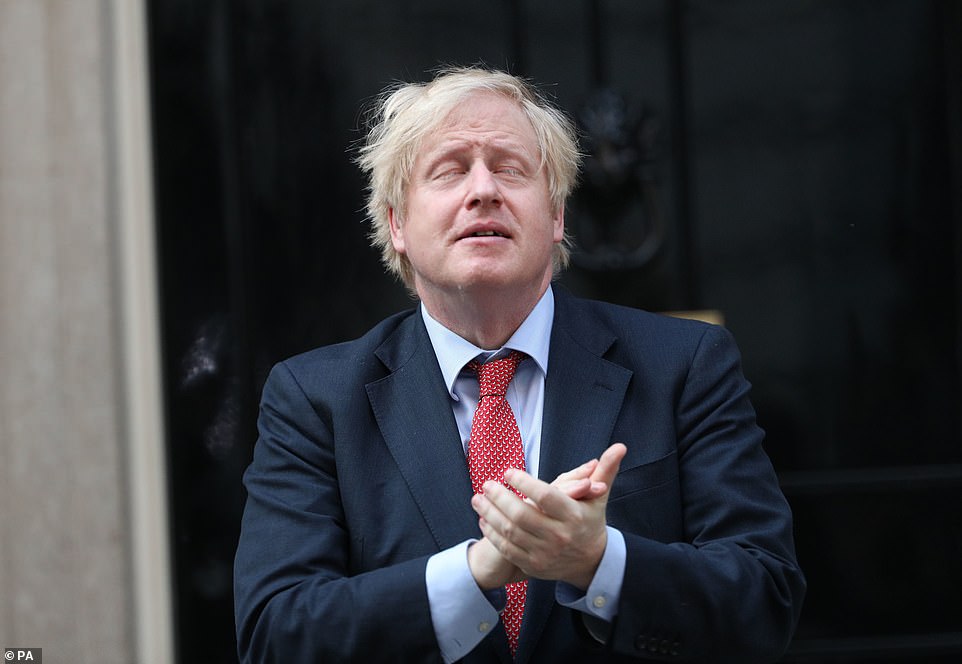 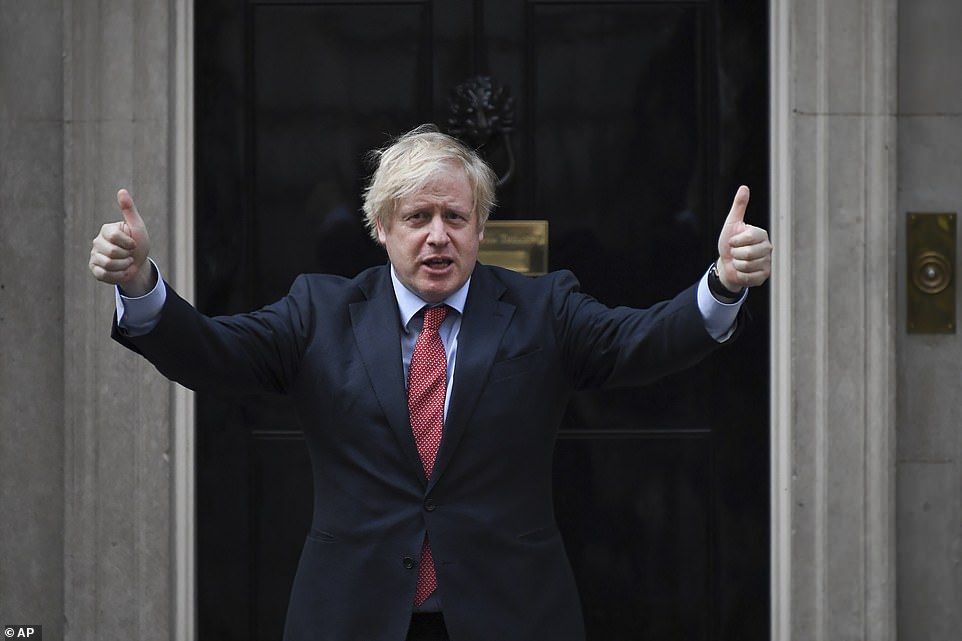 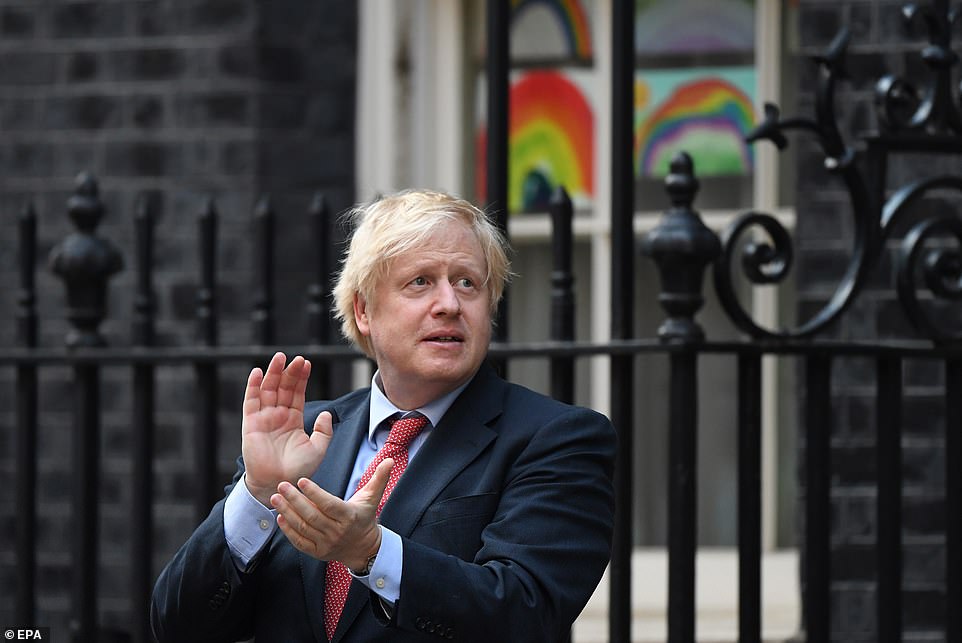 Boris Johnson joins clap for our carers as Britain enters their sixth week of lockdown due to the coronavirus pandemic. The Prime Minister is due to speak on Sunday about lockdown rules going forward 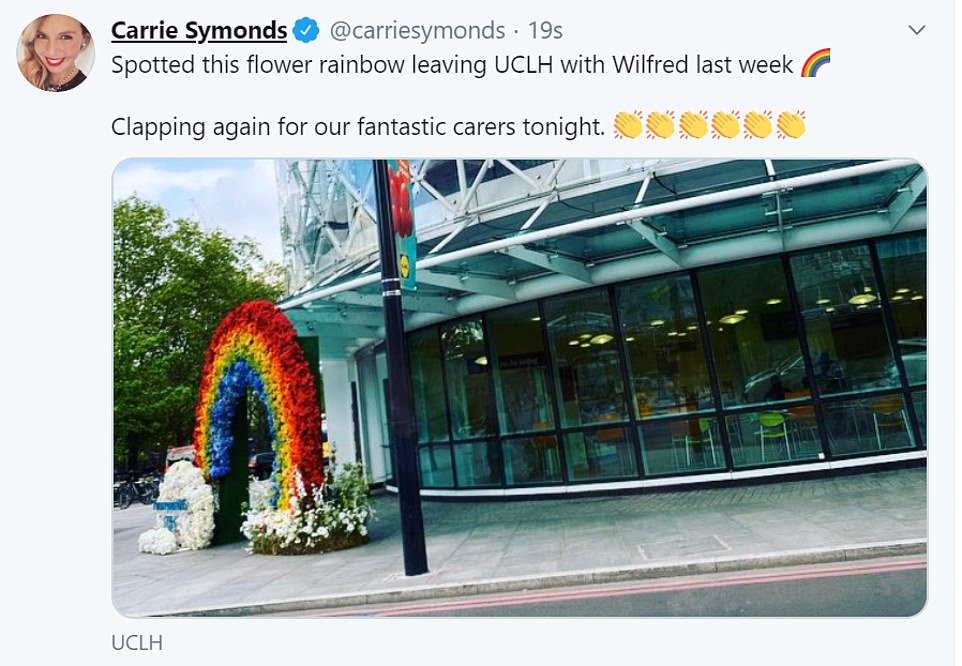 The prime minister’s partner Carrie Symonds joined in with tonight’s clap, posting this photo of a rainbow arch after the birth of their son Wilfred last week 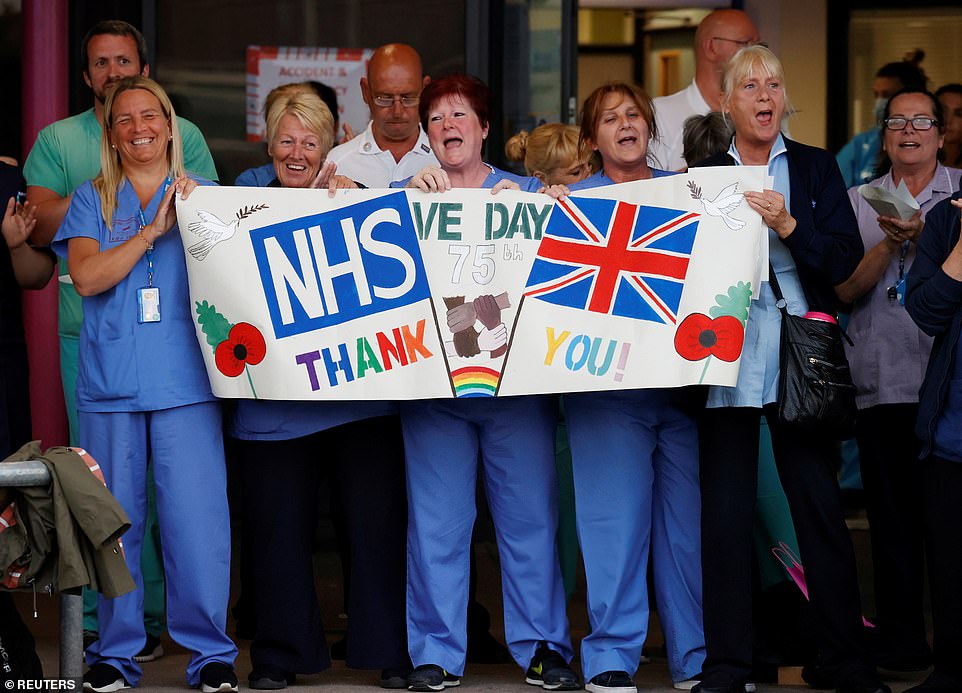 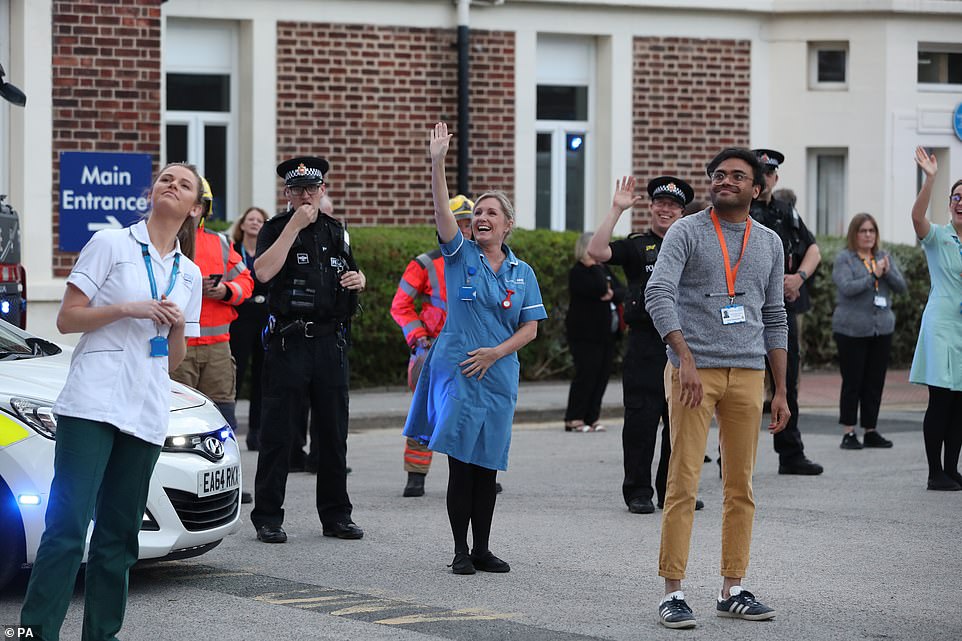 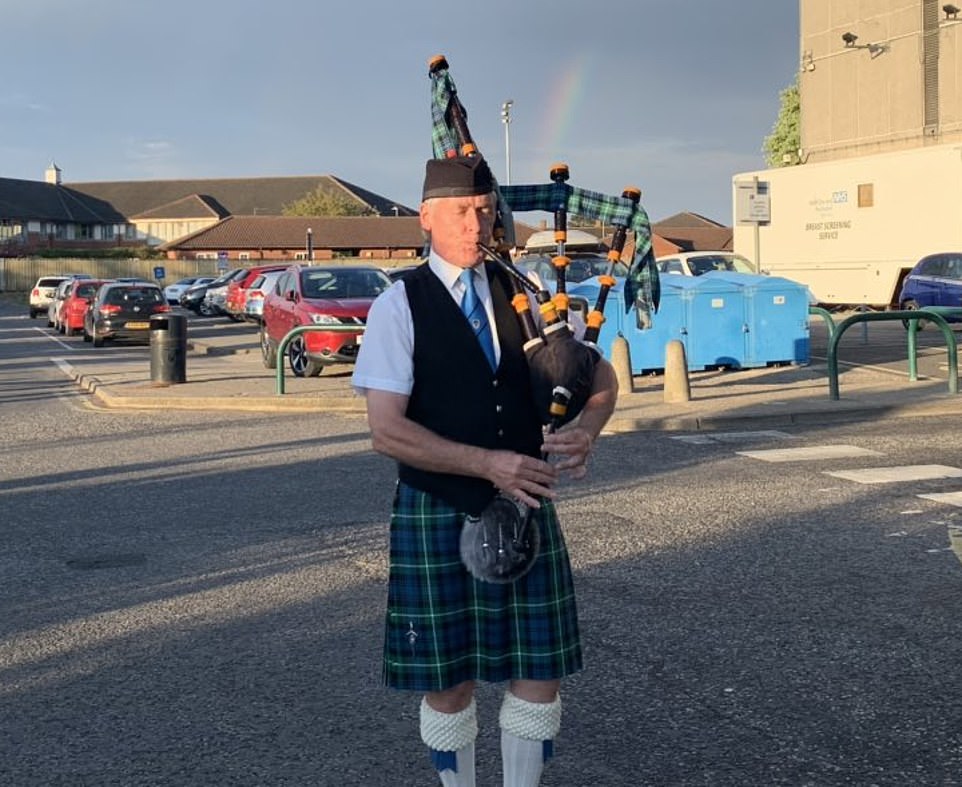 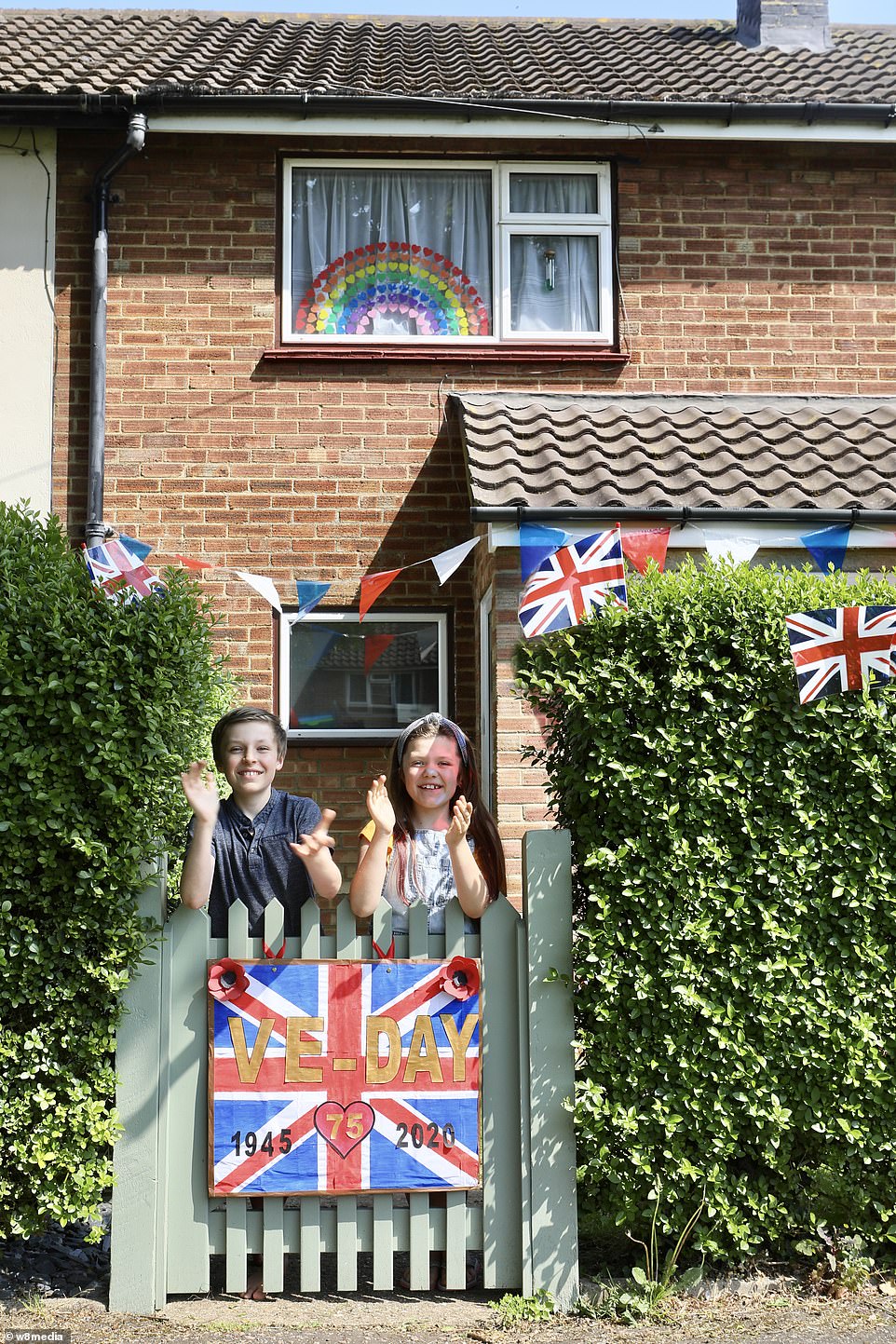 Charlie and sister Sophie from Hertfordshire out clapping in support for the NHS with their house all ready for the forth coming V.E day celebrations 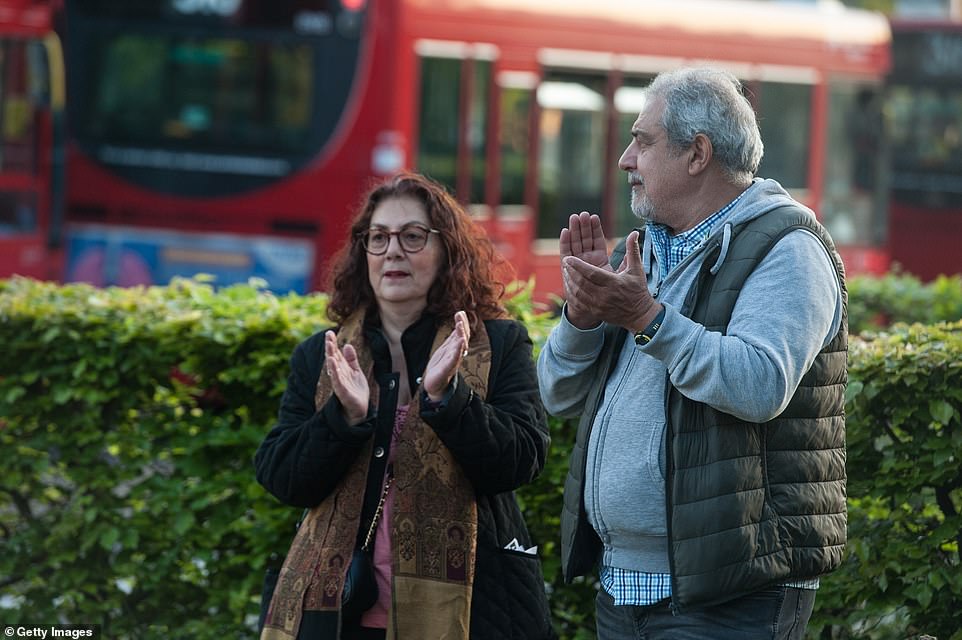 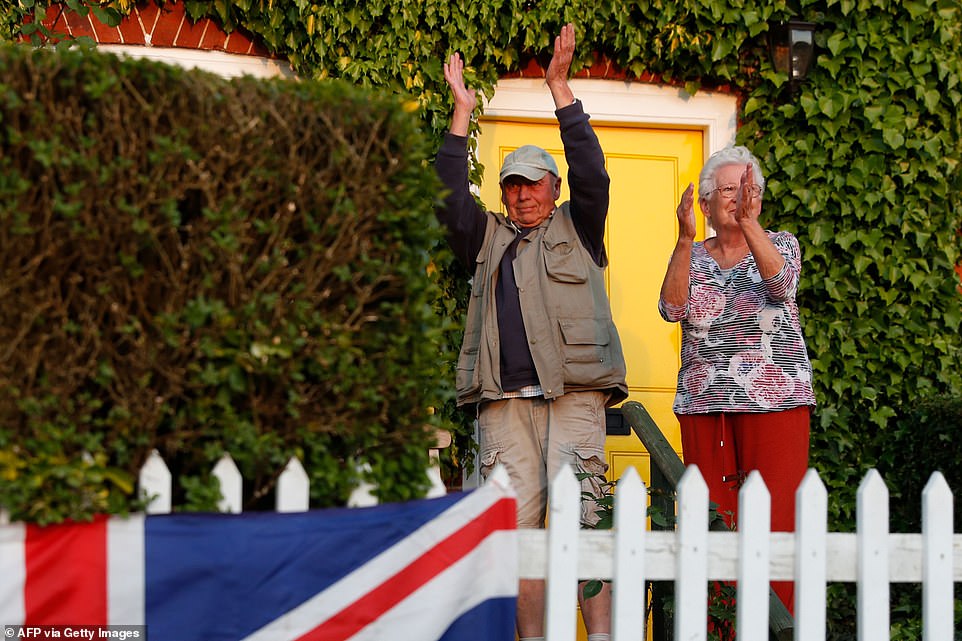 Residents participate in a national ‘clap for carers’ to show thanks for the work of Britain’s NHS workers and other frontline medical staff around the country as they battle with the novel coronavirus pandemic in Hartley Wintney, Hampshire 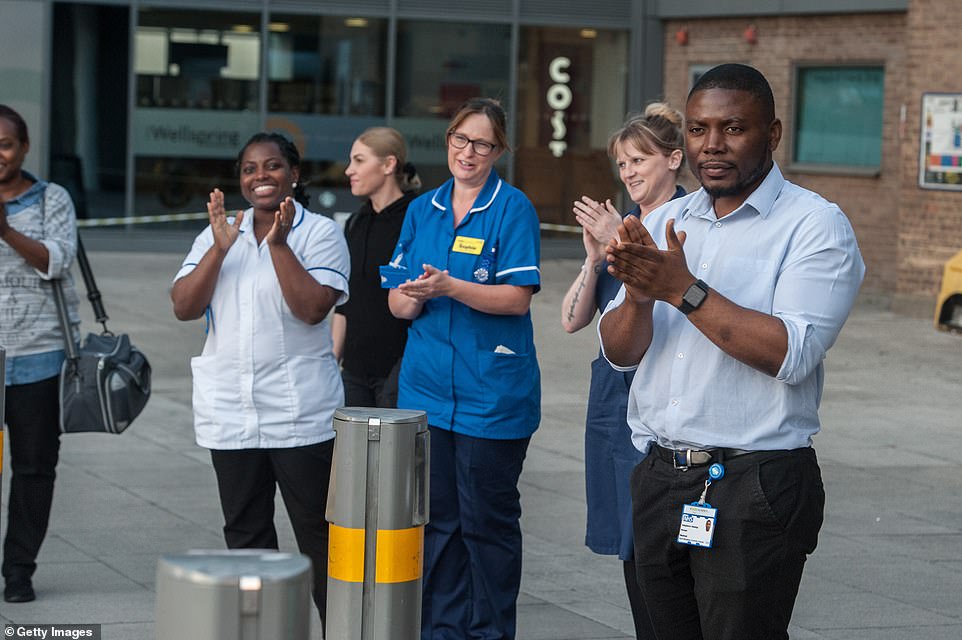 Children banged on pots and pans while some people blared foghorns and bagpipes to mark tonight’s event.

In some parts of the country, people even shared photos of rainbows appearing just as they stopped to take photos of the clapping.

The country has marked the weekly-event with gusto and it appears that, seven weeks in, the nation is still keen to express its thanks to its carers and key workers amid the pandemic.

Health Secretary Matt Hancock was filmed clapping on a London rooftop to show his support for health workers.

In a Twitter post he said: ‘A brilliant show of support again for our heroic carers and all those on the front line of our national coronavirus effort.’

While former Labour leader Jeremy Corbyn took to the streets outside his Islington home to ring a bell in support of carers.

Ahead of tonight’s poignant event, people across the UK showed their support for NHS workers by putting up rainbow flags in windows and outside their homes. 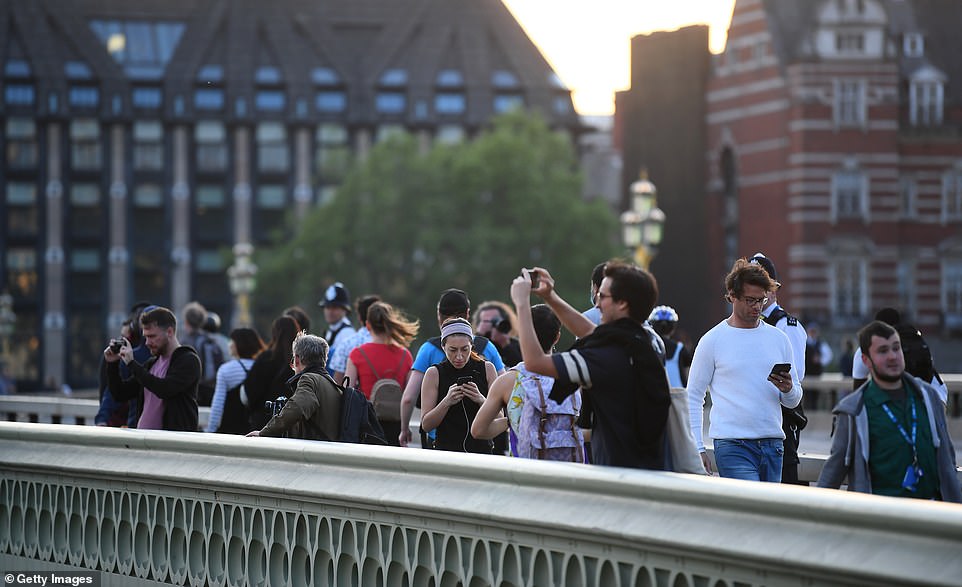 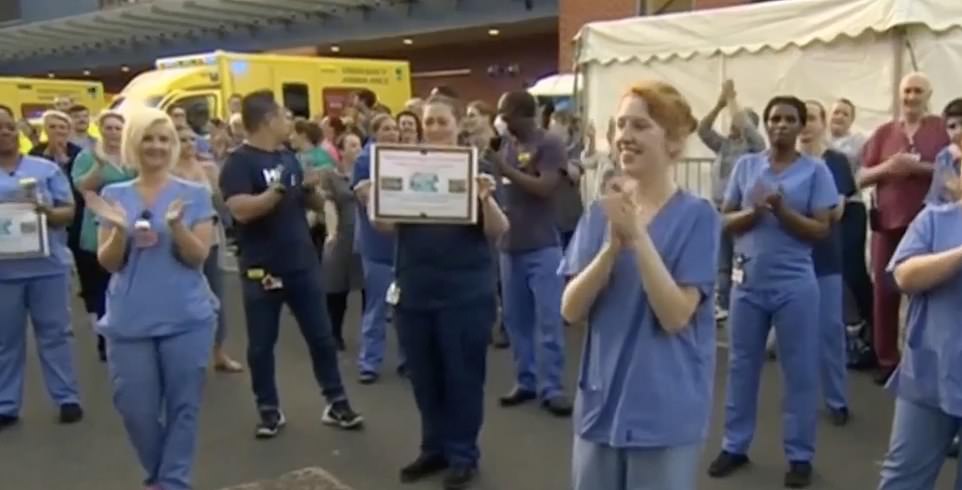 Emotional carers applause and cheer as they join in tonight’s clap for carers event at 8pm, with millions all over the country paying tribute

Key workers across Britain take part in Clap for carers event this evening, with Britons giving their thanks to the NHS and other key workers

Children bang pots and pans in support of the NHS as a rainbow appears near Runcorn, Cheshire. Brian Allan said: ‘How poignant, girls went out to clap for carers and keyworkers, just as a rainbow came out’

In London, Network Rail erected a rainbow sign at Clapham Junction station with a message saying thank you to key workers for their efforts amid the pandemic.

Meanwhile, houses in Wattsville, a village in the Gwent valleys decorated their house with rainbow flags showing support for the NHS, carers and other frontline workers ahead of tonight’s event.

Last week, Boris Johnson led the clapping as he stood on the steps of Downing Street just hours after claiming the UK is ‘past the peak’ of the virus and on a ‘downward slope’ in the number of deaths at his first daily press conference back at No10.

His partner Carrie Symonds tweeted to say she had ‘another wonderful reason’ to clap for the Health Service after giving birth to their baby boy last Wednesday.

There were also three cheers for newly-promoted Colonel Tom Moore outside his home in Bedfordshire to mark his 100th birthday, with the PM giving him a personal thank you and his neighbours coming out in force to sing for him.

Last week, people stood in awe as rainbows formed above their towns and cities just as they prepared to clap – the same symbol children have been putting in their windows to say thank you to the NHS.

The nationwide campaign was started by a Dutch woman from London called AnneMarie Plas, who went viral with her plea to clap for healthcare workers after seeing it take place in her home country and others around Europe. 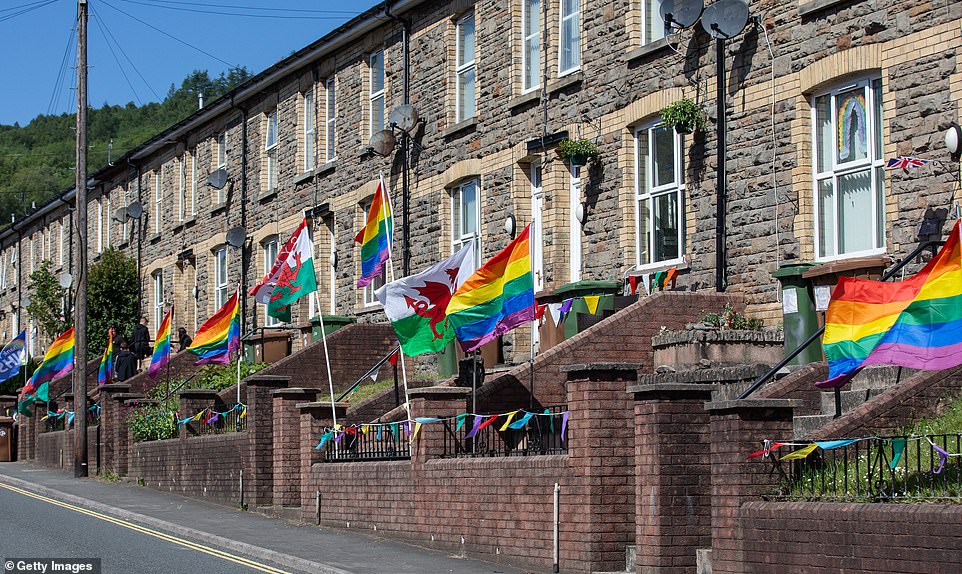 Houses in Wattsville, a Village in the Gwent valleys have decorated their house with rainbow flags showing support for the NHS, carers, and key workers 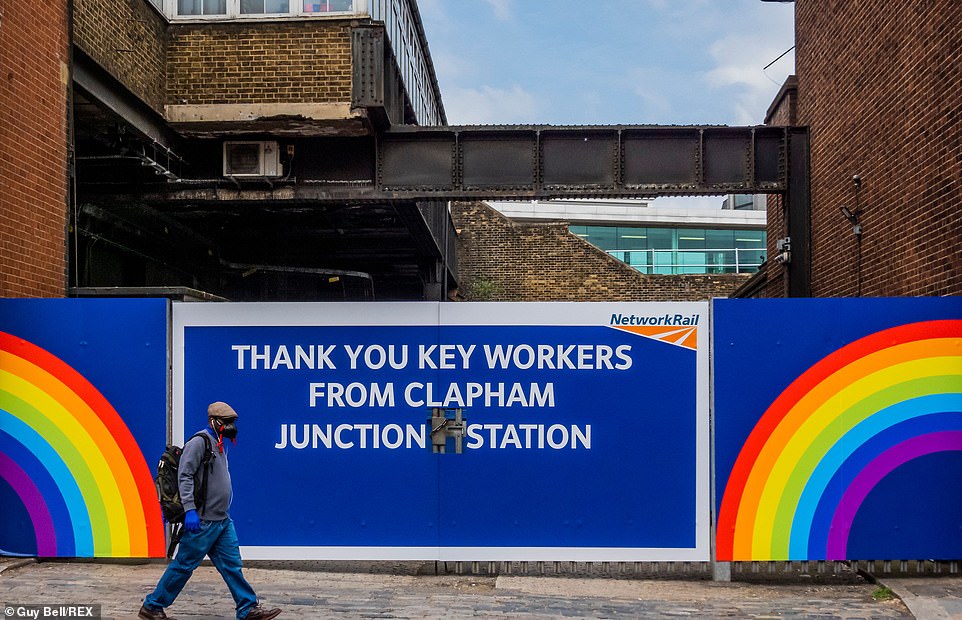 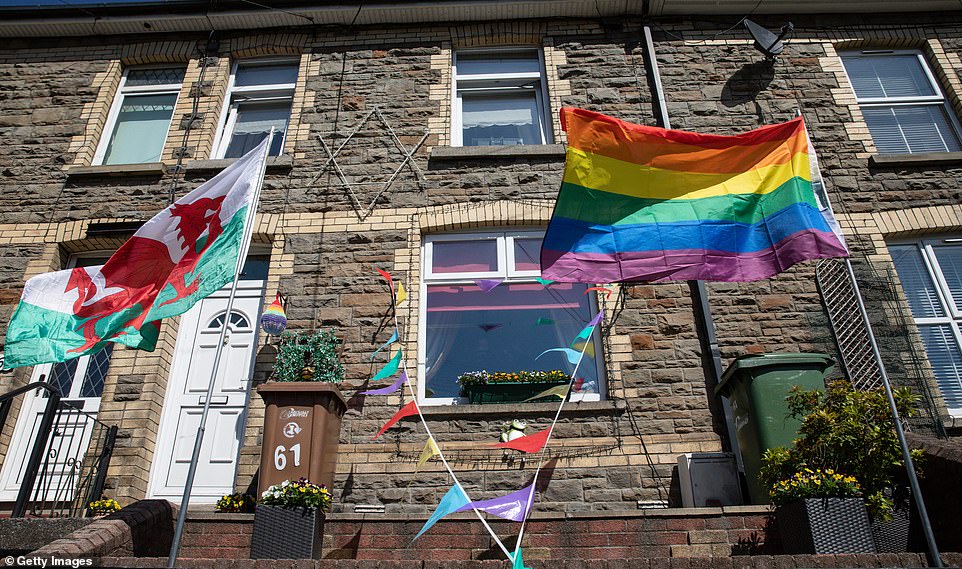 The villagers in Wattsville put up rainbow flags in almost every house, flying them alongside Welsh flags ahead of tonight’s event 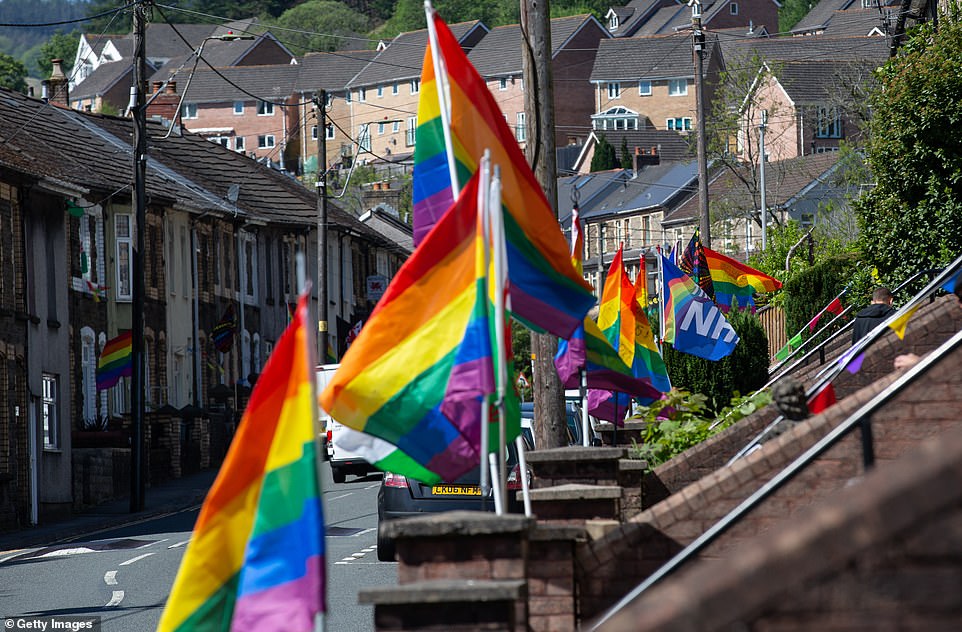 It comes as Dominic Raab tonight announced there is ‘no change’ yet to the UK’s coronavirus lockdown rules as he urged Britons not to take advantage of sunny bank holiday weather – even as Boris Johnson prepares to ease restrictions.

The Prime Minister will use an address to the nation on Sunday to set out his lockdown exit plan with some changes then expected to be made starting on Monday.

Mr Raab said restrictions must remain in place for the moment as he renewed them for another three weeks but risked confusing the situation by saying the PM will spell out ‘milestones’ that will permit moves to loosen the draconian curbs.

The Foreign Secretary told the daily Downing Street press briefing that initial changes will be ‘modest’ and ‘incremental’ – and could be reversed if the disease starts to flare up again.

Mr Raab said the rate of infection – the R value – was between 0.5 and 0.9 and the number of new coronavirus cases and daily death toll were both ‘steadily falling’.

Mr Johnson today told Cabinet that the government will be proceeding with ‘maximum caution’ as Downing Street warned people not to sunbathe this weekend as temperatures are due to rise to almost 80F.

The Prime Minister’s Official Spokesman told reporters ‘there is no change to the advice’ and people are still being told to stay at home as much as they can. Asked if that meant ‘don’t sunbathe this weekend’, the spokesman said: ‘If you want to put it like that.’