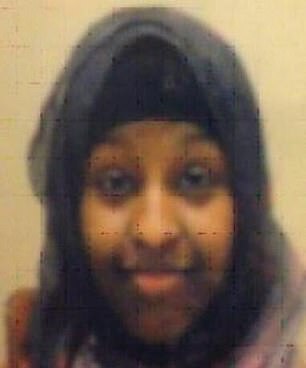 A missing teenage girl has been found six years later in a Syrian detention camp for jihadi brides, reports claim.

Nasra Abukar was at the centre of a widespread search following her disappearance from her home in Lewisham, south east London, in 2014 when she was just 18 years old.

It has now emerged that she traveled to the Middle East where she married an Isis fighter from Cardiff and gave birth to two sons, The Times reports.

One of her children, Faris, was killed in an airstrike that also injured his father, but the other child, three-year-old Talha, remains with his mother at the al-Hol detention camp, it is claimed.

Abukar now desperately wants to return to Britain despite her citizenship having been revoked on grounds of national security, reports say.

Her mother, Kaha, said they she does not ‘have any contact with her’, and expressed shock that her daughter married into Isis.

Abukar’s parents, who are of Somali origin, are understood to have reported their daughter missing in June  2014, and her case was then undertaken by the national charity Missing People.

A member of Abukar’s family had reposted a tweet with an appeal to find her, along with worried messages hoping for her safe return.

But it is now understood Abukar had secretly planned to travel to Syria where she would marry Isis fighter and propagandist Aseel Muthana – who is understood to have also taken a second wife.

It is believed that Abukar and Muthana, who is also 24, stayed with Isis until its last stand in Baghouz in early 2019.

Abukar had used the alias Umm Faris, meaning ‘mother of Faris’, to preach the supposed virtues of the Islamic State online, reports say.

In one post from November 2015, following a massacre in France’s capital by an Isis-trained cell, she simply wrote ‘Paris’ with a ‘crying with laughter’ emoji, it has been reported.