Moderna Covid jab 'is effective against Kent AND California variants'

Moderna’s coronavirus vaccine is effective against the Californian variant spreading in the US, scientists say.

And researchers also found the jab sparks Covid-fighting antibodies that stay in the blood for at least six months following a second dose.

Evidence already shows the vaccine — deployed in Britain for the first time yesterday — works against the Kent variant, which is dominant in both the US and UK.

But experts say the jab may cause more side-effects than Pfizer’s similar one, with up to three-quarters of recipients experiencing pain at the infection site or headaches.

One Duke University study found the Moderna jab triggered fewer antibodies against the Californian strain — dubbed B.1.429. But experts said this did not mean it was less effective, and pointed out there were other parts of the immune system.

Separate research from academics at the National Institute of Allergy and Infectious Diseases and Emory University discovered levels of neutralizing antibodies remained at high levels for at least six months after the top-up dose.

Britain has ordered 17million doses of Moderna’s jab — enough for 8.5million people. Supplies are expected to be earmarked for under-30s after regulators said yesterday they should receive an alternative to the AstraZeneca vaccine.

The Californian variant carries mutations to its spike protein and has been detected almost 14,000 times in the US — but it is yet to be spotted in the UK.

In one study, researchers from Duke University exposed blood samples from people who had received both doses of the Moderna coronavirus vaccine to the California variant. Pictured: A vial of Moderna’s COVID-19 vaccine, April 7

WHICH VACCINES ARE BRITAIN USING? AND HOW EFFECTIVE ARE THEY?

How it works: mRNA vaccine – Genetic material from coronavirus is injected to trick the immune system into making ‘spike’ proteins and learning how to attack them.

How it works: Adenovirus vaccine – To make the vaccine, the common cold virus is genetically modified to trigger it to make the Covid spike protein — which the virus uses to invade cells.

When the vaccine is administered the patient’s immune system attacks the spike protein by building antibodies, priming it to fight off Covid before it leads to an infection.

How it works: mRNA vaccine – both Moderna’s and Pfizer and BioNTech’s vaccines work in the same way.

* the latest data goes up to March 21

** data taken from a US study, joint with Pfizer. Other real world data comes from Public Health England in the UK

For the first study, published in The New England Journal of Medicine, the Duke team looked at blood samples from 26 people who had received both doses of the Moderna vaccine.

The serum was then exposed to the California variant.

The mutant strain was first identified in May 2020 and was virtually nonexistent until October.

In a recent study, the University of California, San Francisco looked at 2,172 samples of the virus collected between September 2020 and January 2021 across California.

By January, the new variant accounted for more than 50 per cent of all the genetically analyzed coronavirus samples.

In short order, it had become the most common strain in the California and may account for up to 90 per cent of the state’s infections.

Lab studies performed by USCF found that B.1.427/B.1.429 produced a viral load that was twice as that triggered by other variants.

That suggest the homegrown variant is better at copying itself more quickly once it gets inside the human body and hijacks its machinery.

The new study found that protectiveness of the Moderna vaccine against the California vaccine only slightly declined, with about two times fewer neutralizing antibodies.

However, against the South African variant, antibodies generated by the vaccine had 6.7 times to 9.7 times less neutralizing power.

The team says this is good news because while the California variant is prevalent in the most populous US state, the South African variants is not very widespread.

‘The good news is the California variant does not appear to be a problem for our current vaccines,’ said study author Dr David Montefiori, professor and director of the Laboratory for AIDS Vaccine Research and Development in Duke’s Department of Surgery.

‘That’s important to know because this variant is now as prevalent in the US as the UK variant, both of which appear to be more contagious.’

For the second study, also published in the New England Journal of Medicine, the team looked at blood samples from 33 healthy participants.

All had been dosed in the phase one trial and researchers looked at levels of binding and neutralizing antibodies more than 200 days after the first dose.

Among all age groups, antibody activity level remained high at the six-month mark.

‘[A]ntibodies that were elicited by [the vaccine] persisted through six months after the second dose,’ the authors wrote.

‘Ongoing studies are monitoring immune responses beyond six months as well as determining the effect of a booster dose to extend the duration and breadth of activity against emerging viral variants.’

The report echoes what Pfizer-BioNTech reported last week about their coronavirus vaccine, which works in a similar way to Moderna’s jab.

However, despite reports about Moderna’s protectiveness, recipients report more side effects than those who got the Pfizer-BioNTech shot.

In another study, published in JAMA, CDC researchers looked at reports collected through V-SAFE, which uses text messages and web surveys so immunization recipients can write down if they are experiencing any side effects.

After the first dose, people who got the Moderna inoculation were more likely to report side effects.

For example, 73.9 per cent of Moderna recipients reported an injection site reaction, such as pain or redness, compared with 65.4 per cent of people who received Pfizer. 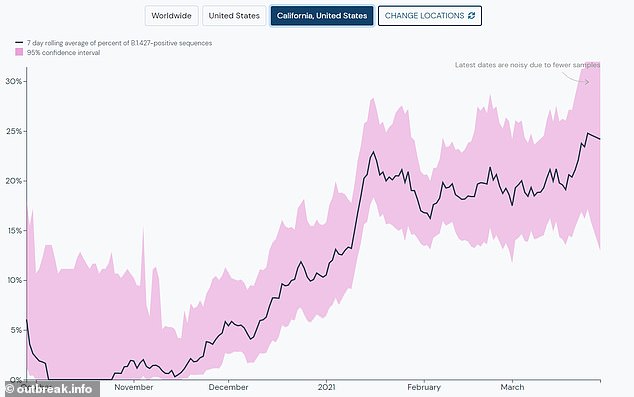 Additionally, 51.7 per cent for those given Moderna reported reactions such as headache, fever or chills compared to 48 per cent of Pfizer recipients.

The disparity between the two vaccines increased after the second dose.

A total of 81.9 per cent of Moderna recipients reported a reaction at the injection site and 74.8 per cent reported other side effects.

Comparatively, 68.6 per cent of those given the Pfizer jab reported injections sire reactions and 64.2 per cent had other symptoms.

It’s unclear why more people who get the Moderna shot report side effects.

The National Institutes of Health is now launching an investigation looking at why some people have suffered allergic reactions from the Pfizer and Moderna vaccines.

A 24-year-old carer yesterday became the first person in Britain to get Moderna’s Covid vaccine as the roll-out was expanded in Wales and Scotland.

Elle Taylor, from Ammanford, revealed she was ‘very excited and happy’ to receive the jab, adding that the nurses were lovely and it ‘didn’t hurt’.

‘I’m an unpaid carer for my grandmother so it is very important to me that I get it, so I can care for her properly and safely,’ she said. ‘My grandmother has had her first dose and she is going for her second dose on Saturday.’

Health Secretary Matt Hancock said he was ‘delighted’ the first dose of Moderna’s vaccine had been administered in the UK.

Britain is only expected to get 100,000 doses of Moderna’s vaccine in April.

Around five per cent of that supply has already been sent to one Welsh hospital trust, covering three regions.

Ministers have bought 17million doses in total – enough for 8.5million people – and have planned for deliveries of the jab to ‘significantly increase’ in May.

Leaked supply projections suggest No10 anticipated it would receive around 160,000 doses every week next month.