Moment angry commuter, 32, breaks a railway guard’s jaw after he was challenged for not having a ticket is revealed in CCTV footage – as the attacker is jailed for 28 months

This is the moment an angry commuter ‘caved in’ a guard’s face and broke his jaw in a vicious beating at a railway station after he was challenged for not having a valid train ticket.

Bricklayer Michael Lucas, 32, who had been drinking heavily, flew into a rage after learning staff would not replace a £70 weekly pass he had lost earlier that day.

During his outburst at Wigan Wallgate station in Wigan, Greater Manchester, father-of-three Lucas told Colin Spicer at a set of ticket barriers: ‘I’ll kill you, I’ll rip your f***ing head off.’

He barged through the barriers and grabbed Mr Spicer by the throat, before punching him in the face with a blow so hard, the victim compared it to being struck with a baseball bat.

At Bolton Crown Court, CCTV footage of the assault was played to a judge before Lucas was jailed for 28 months, having admitted inflicting grievous bodily harm. 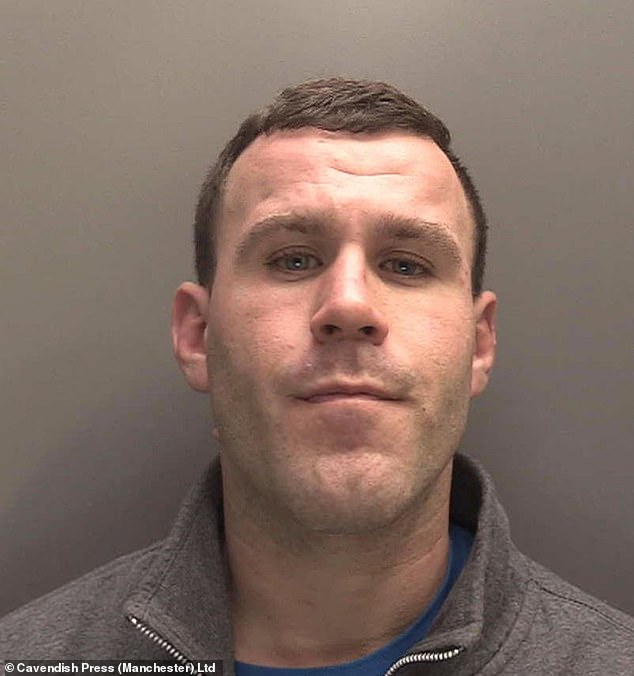 Michael Lucas, 32, ‘caved in’ a guard’s face in a vicious beating at a railway station after he was challenged for not having a valid train ticket 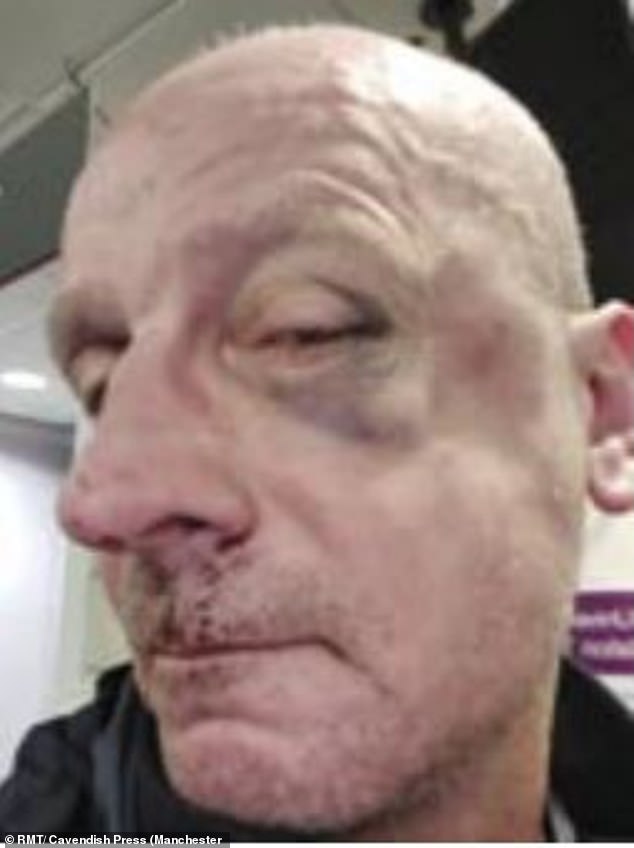 The guard, who is in his 50s and who was working on a zero hours contract for a security contractor, fell to the floor and suffered ‘complex’ multiple facial fractures including a broken jaw and fractures to his eye socket.

He had to take four months off work and now speaks with a lisp due to his injuries. Nerves in his teeth and face are beyond repair and he struggles to eat properly.

In a statement, Mr Spicer told police: ‘I am back at work now but I am hyper-aware that I must protect my face.

‘The slightest knock will cave my face back in and I have found myself moving away from large groups of people as I am worried I may get hit.’

The incident occurred at 8.50pm on February 6 this year when Lucas, of Westhoughton, near Bolton had been planning to travel to Meols Cop in Southport as part of his ‘regular’ commute.

He first lost his temper with a female member of staff after she said she was unable to replace his weekly pass and he temporarily left the station after apologising when police arrived.

Shortly afterwards Lucas returned to the station and attacked Mr Spicer who was working at the barriers.

In his statement to police, Mr Spicer said: I was on my own at this point at the railway station… I saw the same man flying into the railway station and I knew he had no intention of catch a train due to the way he came in. He came straight towards me and hurled abuse and threatened me.’ 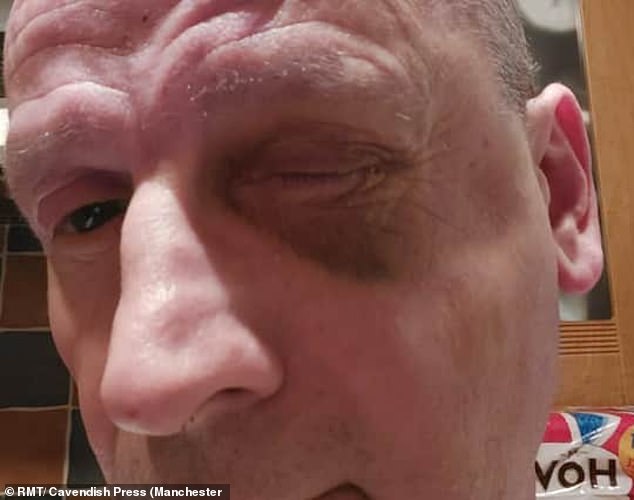 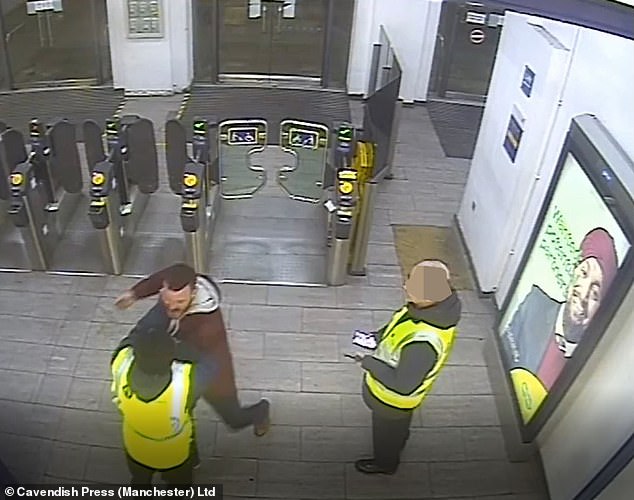 Prosecutor Craig MacGregor said: ‘The defendant had been dissatisfied over the loss of his weekly pass and was saying “Let me through”. He started screaming and shouting when his request was declined.

‘Shortly afterwards he hurled abuse at Mr Spicer saying: “I’ll kill you, I’ll rip your f***ing head off – you’re nothing but a little midget p***k with a little p***k, you d**k.” Mr Spicer said he then felt a very painful blow to the face as if he had been hit with a baseball bat.’

Lucas fled the scene but was traced after he dropped his phone during the attack which contained his driver’s licence and bank cards.

The court heard he had 23 other offences on his record dating back to 2008 for six assaults, two convictions for battery, damage, harassment and breaching a restraining order. The latest assault occurred in breach of a community order imposed last year for assault.

A probation report on Lucas said he posed a high risk of re-offending, concluding that his attack against Mr Spicer ‘formed part of an established pattern of similar offending where he resorts to violence to resolve conflict when he feels aggrieved or challenged.’ 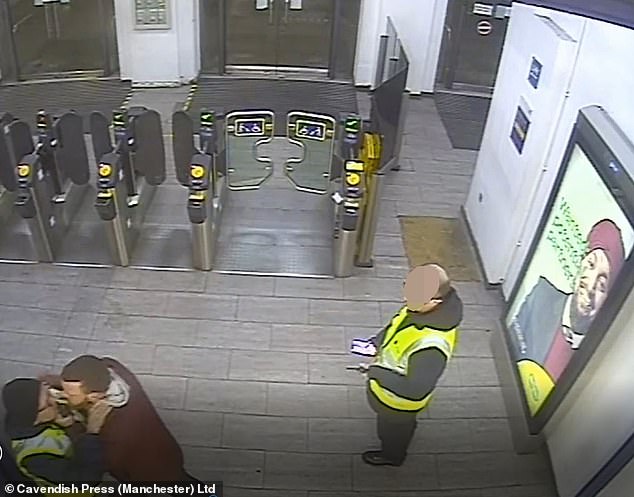 In mitigation, defence counsel Miss Constance Halliwell said her client had mental health problems and added: ‘He is remorseful and regretful for his behaviour as well as being deeply ashamed.

‘He had experienced the breakdown of a long-term relationship with his partner who is the mother of two of his children. He lost everything as a result of that. He has had significant difficulties with drink.’

Sentencing Judge Tom Gilbart told Lucas. ‘It is utterly shameful that anyone let alone a father of young children should behave in this way.

‘You shouted insults at Mr Spicer then pushed your way through the ticket barrier, grabbed him around the throat and pushed him against a wall.

‘Other staff told you to stop and you then released your victim only to then punch him in the face. He was an entirely innocent man doing his job and doing no more than his job yet you decided to attack him.

‘It was entirely unprovoked at a time when you were drunk. This was on any view appalling thuggery.’

At the time of the assault, the RMT union helped raise £4,500 for Mr Spicer after learning he would receive little or no sick pay from his employers at Carlisle Support Service whilst off work with his injuries.