The Morrison government has failed in a bid to gain two extra days to ready its case against Novak Djokovic.

Djokovic’s bid to overturn his deportation is due to be heard on Monday, but Home Affairs Minister Karen Andrews applied to the Federal Circuit Court for the hearing to be heard on Wednesday. Judge Anthony Kelly refused the request. 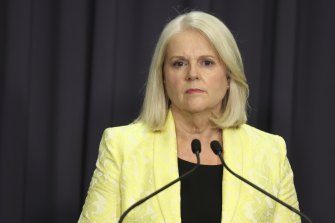 The federal government had been seeking the extension before Djokovic’s lawyers filed their submission, which claimed the 20-time grand slam winner was treated without procedural fairness and was given indications he would be permitted into Australia on January 1.

In an initial hearing to set timelines for the case on Friday, Tennis Australia’s lawyers said it would need to know whether Djokovic could compete by Tuesday, for scheduling purposes. The judge said he would try to accommodate the parties to come to a resolution but stressed the court would not be rushed.

“The tail won’t be wagging the dog here,” Justice Kelly said. “If Tennis Australia decides to do what it wants to do in running its enterprise, it will. All I can do is provide every facility available to this court to assist these parties to resolve it in the best way possible.”

In documents filed on Saturday, Djokovic’s lawyers claim he received correspondence from the Department of Home Affairs on January 1 stating Djokovic’s Australia Travel Declaration had been assessed and his responses “indicated that he met the requirements for a quarantine-free arrival into Australia where permitted by the jurisdiction of [his] arrival”.

The letter Djokovic’s lawyers claim allowed him to travel to Australia without quarantining did not guarantee his entry into Australia, this masthead has learnt.

Djokovic filled out an Australia Travel Declaration using an app and declared he was exempt from needing to be vaccinated because he was infected within the past six months. The app provides a prospective traveller with a preliminary indication of their eligibility to enter Australia.

However, the result is based on the declarations of the applicant and does not provide final approval for a person to enter.

The first thorough test of a person’s evidence to prove their vaccination exemption occurs when they arrive in the country and their paperwork is scrutinised by border officials, a source familiar with the process said.

Federal Health Minister Greg Hunt declined to answer specific questions about the federal government’s assessment of Djokovic’s exemption application on Sunday morning. “As this is now a matter before the courts I’ll respectfully leave any commentary until it is heard by the courts,” he said.

Mr Hunt confirmed the second Australian Open player who entered the country using the same exemption, Renata Voráčová, had voluntarily left the country after her visa was cancelled.