Mother-of-two, 44, who complained of chest pains but was too scared to go to hospital due to Covid dies of a heart attack… ANOTHER tragic casualty of the pandemic but NOT the virus itself

A mother-of-two has died of a heart attack as she was too scared to go to hospital over her fears of catching Covid.

Joanne Mills had chest pains earlier this month but refused to go to hospital over fears she would contract the virus.

The 44-year-old also did not want to call a doctor as she felt ‘there was no point’ as she said it would only be a telephone consultation.

She died of a heart attack on October 14 after paramedics revived her ’15 times’ in an ambulance outside her home in Rainham, Essex.

Daniel Beal, 47, (left) with his partner Joanne Mills, 44, (right) who died of a heart attack after refusing to go to hospital for chest pains as she was afraid of catching covid 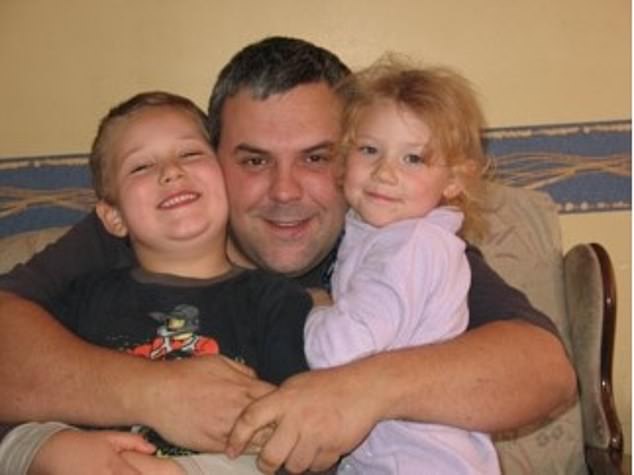 Mr Beal with the couple’s two children, Jordan, now 19 and Jennifer, now 17, when they were younger

Joanne is another tragic casualty of the pandemic and a further reminder of the toll this virus is taking on the nation.

Her partner Daniel Beal, 47, said: ‘My Joanne is a statistic in the eyes of the government. That is what it feels like. But she is not to me.’

On Monday Britain recorded another 18,804 coronavirus cases and 80 deaths as both infections and fatalities continue to creep upwards.

But there are warnings that thousands of other lives have been lost as a result of missed or delayed treatment.

Vital operations were cancelled and patients missed out on potentially life-saving therapy in the spring because tackling Covid-19 became the sole focus of the health service.

Patients were also reluctant to seek hospital care in fear of both putting strain on the NHS and picking up the coronavirus, experts claim.

At the start of the pandemic it was predicted in a report by the experts at the Department of Health and Social Care, Office for National Statistics, Government Actuary’s Department and the Home Office that  up to 25,000 deaths would have come in the first six months because of healthcare delays.

And it looks like that figure could spiral as a number of hospitals have already begun cancelling non-urgent operations. 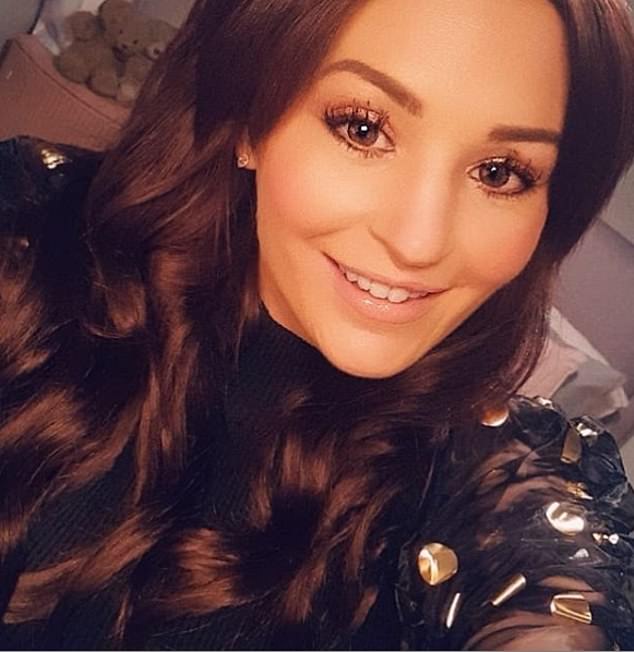 Kelly Smith, 31, was told by her doctors in March that that her chemotherapy was being paused for three months – but her cancer spread and she died on June 13

The cardiologist claimed 700 Britons unexpectedly died, from a cardiac event or condition, such as heart attacks and strokes, each week at the height of the pandemic.

Health Secretary Matt Hancock also previously warned that cancer patients may only be guaranteed timely treatment in the coming months if Covid-19 stays ‘under control’.

It comes following the death of Kelly Smith, a 31-year-old beautician who died after her course of chemotherapy to treat her bowel cancer was paused for three months. Her cancer spread and she died on June 13.

Kelly’s case is not unique, and neither is Joanne’s.

Joanne, a former private ambulance driver, suffered from anxiety and depression, and also suffered PTSD after a car crash in 2018. She also lost her father in May earlier this year to a heart attack.

Mr Beal believes her mental health struggles added to her paranoia about the pandemic. 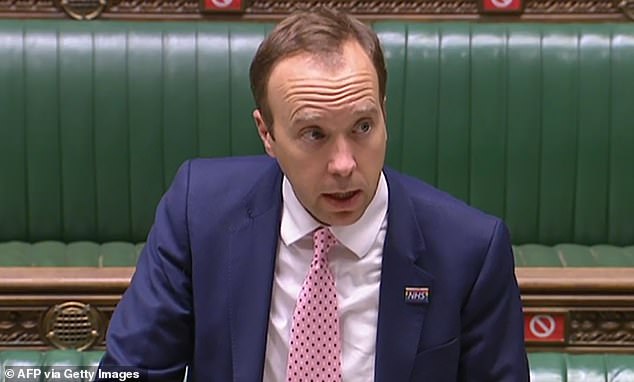 He slammed the government for their handling of the pandemic as well as their ‘scaremongering’.

He claimed that ‘all the changing rules’ are adding to people’s insecurities.

He believes their actions are leading to a swathe of people suffering from poor mental health.

‘The scaremongering this government is doing on a daily basis is damaging,’ he said. They need to wake up and realise that.

‘Now I won’t see my daughters grow up’

Life could hardly have been much better for primary school teacher Jennifer Eldridge in March.

She and her husband Jonathan had just bought their first home, he had been promoted in his Civil Service job, and their elder daughter was settling into her Reception class.

Then at Easter the active, healthy-living 40-year-old began experiencing back pain.

It was impossible to get a face-to-face appointment at the local surgery, and it took a month even to secure an online consultation. She was prescribed painkillers.

Four months later, concerns raised by a blood test she eventually had finally saw Mrs Eldridge referred for a colonoscopy – and a consultant said he had seen what seemed to be a tumour. 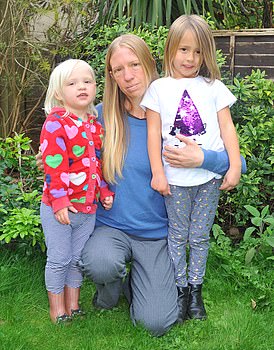 Jennifer Eldridge, who has stage 4 colorectal cancer, is pictured with her daughters Lina, five, and Jasmine, two

Specialists told her she had stage 4 colorectal cancer which appeared to have spread to her lungs, and she was left coming to terms with a terminal diagnosis.

She believes that had it not been for the pandemic, she could have been diagnosed sooner – boosting her chances of seeing daughters Lina, five, and Jasmine, two, at least reach their teens.

Mrs Eldridge, of Bristol, said: ‘I’ve been told my cancer has likely spread to my lungs, meaning it is incurable and I could have just two years to live.

‘If I could have seen my GP earlier, if those supposedly ‘non-urgent’ tests had been carried out… the cancer might not have had the chance to spread. To suddenly have your future as a family ripped from your hands is the worst part. I won’t be there with Jonathan to guide Lina and Jasmine through their childhoods.’

The couple have launched an appeal to help pay for treatments not covered by the NHS.

‘Think about the people who lived through World War Two – they had true leaders and there was a feeling that they were working to do the best for everyone in the country.

‘If these lot will stand there and tell us we are in a war, then act like it.

‘The parties need to work together at times like these.’

Joanne first started complaining of chest pains a few days before her death, but when she kept burping and the pain disappeared shortly after, she wrote it off as indigestion.

Her partner and their two children Jennifer, aged 17, and 19-year-old Jordan, encouraged her to go to hospital, but she refused.

Mr Beal said: ‘We all told her to go to the doctor, but she thought ‘what was the point, the doctor would only do a phone consultation’.

‘And she worried if she went into hospital she would come out with coronavrirus.’

On the evening of her death, Mr Beal recalls her ‘chatting and laughing’ and there was no hint of her being ill.

He went round to his neighbours house for a chat when his daughter came running in to say Joanne was sick.

He found her in an upstairs bathroom being sick and experiencing chest pains and he called 111.

When Joanne explained that the pains were rising up her neck, 111 dispatched an ambulance.

A first responder attended and decided she should go to hospital after an electrocardiogram, which reads the electrical signal from your heart to check for different conditions.

When an ambulance arrived to take her to Bart’s Hospital in London, Joanne was able to walk down the stairs and put on her own shoes.

But when she got into the ambulance her condition deteriorated.

‘She got into the ambulance and she went there and then,’ Mr Beal recalls.

‘She crashed. The paramedics brought her back 15 times. There were five rapid response vehicles there on top of the ambulance and I saw them all bringing out different bits of equipment to help her.’

Joanne was revived and Mr Beal was allowed to see her before paramedics drove her to Basildon Hospital as it was closer to their Essex home.

‘I went in to see her before she went and I think she knew’, Mr Beal said.

‘I told her not to worry about me or the kids, and to look after ad concentrate on herself.

Devastated IT engineer Mr Beal is now fundraising to raise costs for Joanne’s funeral after he was told his contract with PWC is coming to an end at the end of this month.

He wrote on his GoFundMe page: ‘Joanne was only 44 when she passed away due to a severe heart attack, something that I know that could have been so easily avoided if Covid-19 was not around.’

Dying mother: They need to stop focusing just on Corona

A mother-of-two whose lung cancer spread to her brain after her operation was cancelled said: ‘The NHS should be for everybody, not just Covid patients.’

Beth Purvis, 41, said: ‘My prognosis is not good. I’ve likely got four months to a year left to live.’

Mrs Purvis had been scheduled to have a tumour removed from her right lung on March 25. But it was cancelled with only a week’s notice amid the pandemic. 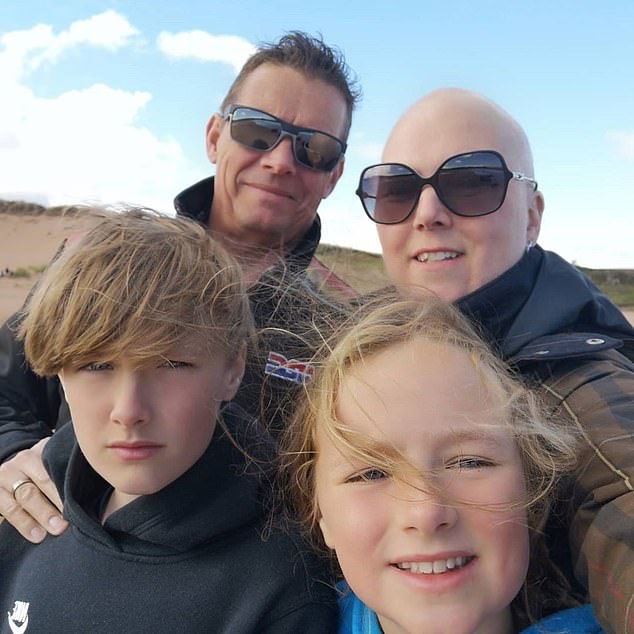 Mother-of-two Beth Purvis’s lung cancer (pictured with husband Richard and children Joseph, 12, and Abigail, 10) spread to her brain after her operation was cancelled

She said: ‘I was devastated, I just burst into tears. It is a critical operation because it could help buy me time.

‘I will never know if that operation could have saved my life. It might have done. But it was cancelled, and then I found out at the end of May it had spread to my brain.’

Mrs Purvis said she and husband Richard, a painter and decorator, have always been up front with their children, Joseph 12, and Abigail, ten, about her treatment.

She said: ‘At the time, I did understand why the hospital needed to free up beds. But that didn’t make it any easier. My message to the Health Service is to try to focus on not just Covid. The Government haven’t made it as clear as they could.’

Mrs Purvis, a legal assistant from Essex, added: ‘Who knows what will happen. I have to stay positive.

‘If I can help prevent someone else going through this, then what’s happened to me hasn’t happened for no reason.’

‘I had to bring our wedding forward’

She has brought the wedding forward to next week because she has no idea how long they will have together. 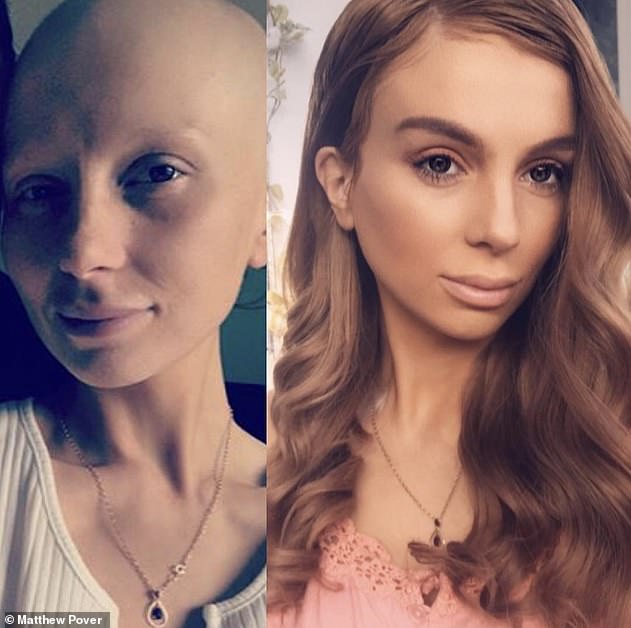 Maxine Smith, 32, has brought her wedding to her builder fiance Mike Peacock forward to next week because she has no idea how long they will have together

She was in the middle of a course of chemotherapy when the country locked down in March.

The former hairdresser finished that treatment and was declared free of tumours, but a drugs trial to keep the disease at bay was shelved.

Last month, she discovered the cancer had returned. She says patients such as her were left like ‘sitting ducks’.

‘Everything was put on hold because of Covid (but) the cancer has been eating away at my body. I’ve now got four tumours. Lockdown has… allowed my cancer to progress and stolen precious time from me. I just want to see my kids through school, I just want more time.’

Miss Smith, of Cheadle, Manchester, added: ‘I still work, I pay my taxes, but I was left when Covid came.

‘I’ve never been so disgusted in my whole life.’