TORY MPs have blasted new Covid rules which will see Brits who lie about their holiday destinations caged for up to ten years – longer than the maximum sentence for some child sex offences.

Matt Hancock said yesterday that travellers who dupe border authorities when coming back from Covid “red” countries would face a £10,000 fine or a lengthy spell behind bars. 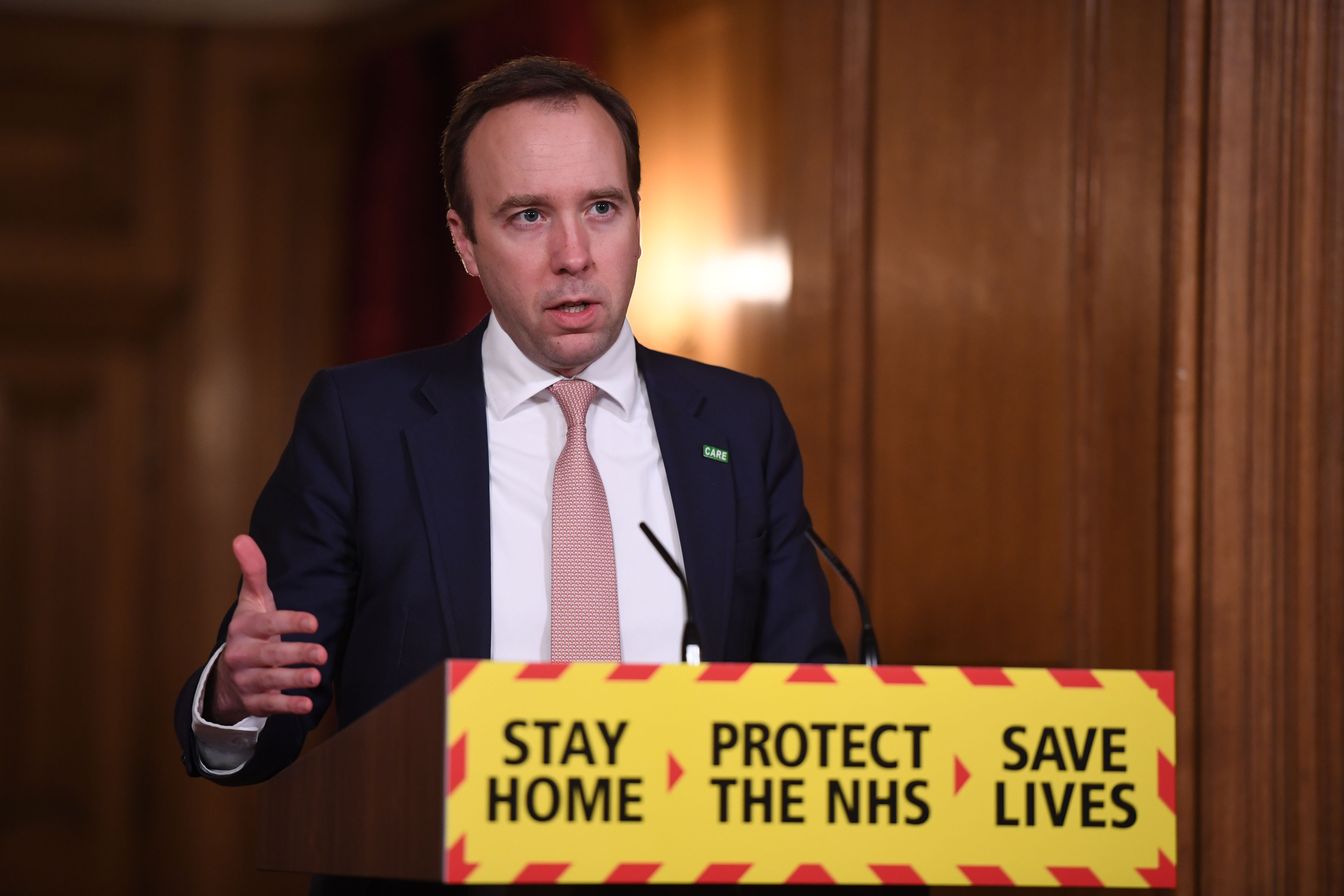 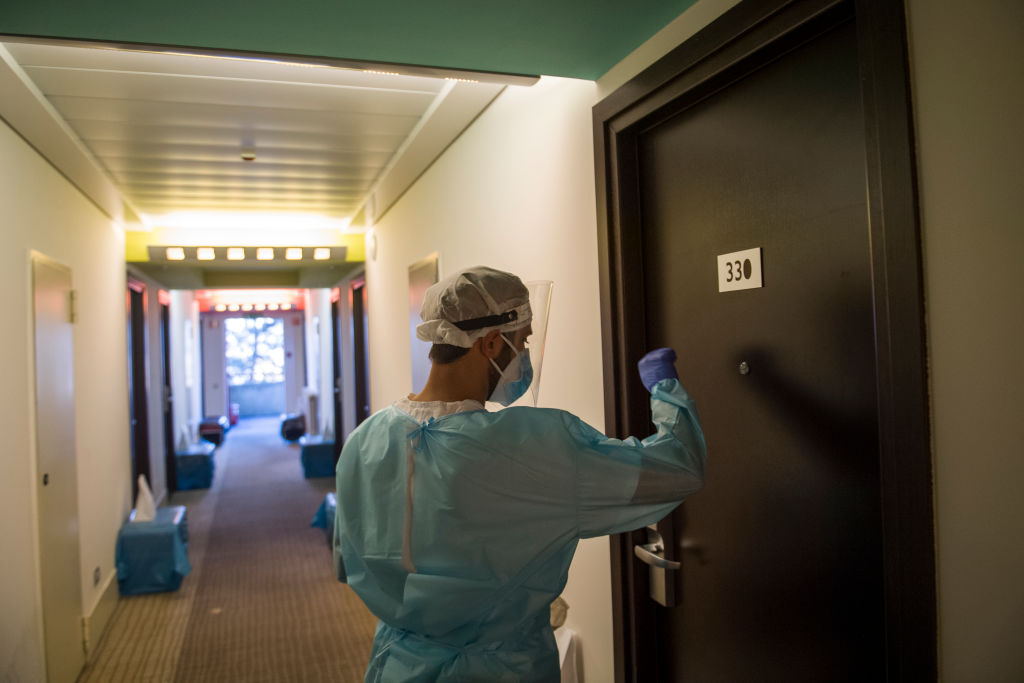 But furious Tory MPs last night suggested the sentence was “disproportionate”, and questioned its severity in comparison to other crimes which carry a shorter jail term.

And the maximum-sentence is also longer than that given for carrying a loaded firearm, which has a seven-year maximum term.

Writing in the Daily Telegraph, Lord Sumption said the Health Secretary’s connection with reality had “snapped”.

He said: “Does Mr Hancock really think that non-disclosure of a visit to Portugal is worse than the large number of violent firearms offences or sexual offences involving minors for which the maximum is seven years?”

And Dominic Grieve, the former attorney general, told the paper: “The maximum sentence of 10 years for what is effectively a regulatory breach sounds in the circumstances, unless it can be justified, extraordinarily high.”

Sir Geoffrey Cox, who served in the same post, added: “I get that the Secretary of State wants to show that this is serious, but you do have to have regard to the overall balance of sentencing policy and law.”

The travel industry also reacted furiously to the new rules.

Tour operator AITO accused the government of trying to “frighten” people, adding: “A 10-year prison sentence seems wildly OTT. People who kill and badly maim others don't get that long in prison.

“They are trying to frighten people, in our view – they should have been stricter early on.”

Crimes you can get a ten-year sentence for

Brits can be slapped with a ten-year maximum sentence for the following crimes:

Attempting to signal to the world that “Britain is closed” because of Covid, people forced to quarantine in hotels will also face fines of up to £2000 for failing to take covid tests after arrival – and the isolation period will be extended if they continue to refuse.

The Health Secretary told MPs the new toughened up measures, expected to come into force next week, are designed to stop vaccine busting covid strains coming into the UK.

He said: "People who flout these rules off putting at risk.

"We're also coming down hard on people who provide false information on the passenger locator form.

"Anyone who lies on the passenger locator form and tries to conceal that they've been in a country on the red list in the 10 days before arrival here will face a prison sentence of up to 10 years."

It's thought the new measures will be in place until at least March 31st.

The new rules mean that anyone arriving from a "high-risk" country, which includes Portugal, the UAE, South America and South African nations, is not allowed to leave the 10 day quarantine – and will have to pay to quarantine at a hotel.

From February 15, the quarantine hotel rules will be enforced, which will cost £1,750 per person, which will have to be booked before travel.

The Department of Health also revealed yesterday that travellers will now have to have two tests after they arrive in the UK – on the second and eighth day of quarantine.

Passengers are already required to have a test 72 hours before arriving in Britain. 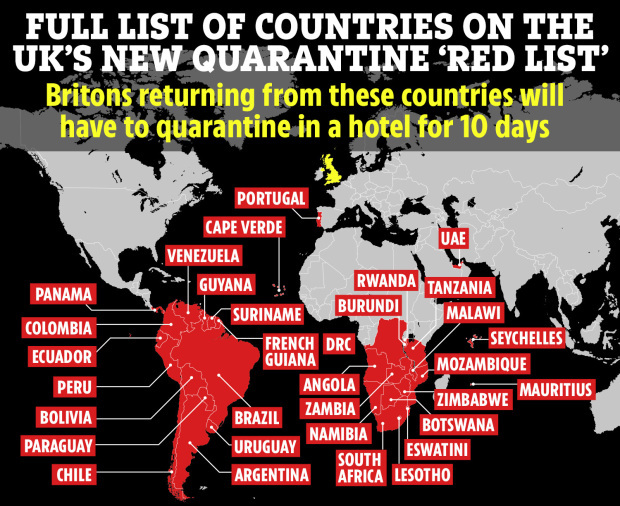 He also revealed the government had signed deals with 16 hotels, securing 4,600 rooms for arrivals coming in from “red” nations next week.

The clampdown comes as the government seeks to stop new variants of the bug entering into Britain.

Experts fear that new strains could reduce the efficacy of vaccines currently being rolled out in the UK – though they have cautioned there is not enough data yet to make any conclusions.

At a Downing Street briefing on Monday, Professor Jonathan Van-Tam warned Brits it was "too early" to make summer holiday plans.

He told the press conference: "The more elaborate your plans are for summer holidays, in terms of crossing borders, in terms of house mixing, given where we are now, I think you just have to say, you're stepping into making guesses about the unknown.

"We just don't have the data, it's just too early."

But he added that it was unlikely that the South Africa variant would become dominant in the UK – and was not more transmissible.

Hotel Quarantine will start on Monday for all arrivals from the following countries: