The ‘game-changer’ blood test: Tens of thousands more Covid-19 victims may be identified thanks to new check that can spot 98 per cent of cases… even in people with no symptoms

Tens of thousands more Covid victims may be identified thanks to a ‘game-changing’ blood test.

Offering a potentially massive boost to the battered economy, it can spot 98 per cent of cases – even those without symptoms.

Scientists fear that existing methods are effective in detecting the virus only in the very sick.

Yet studies show that up to eight in ten cases are so mild that sufferers barely notice they are ill – and therefore will not know they have potential immunity. 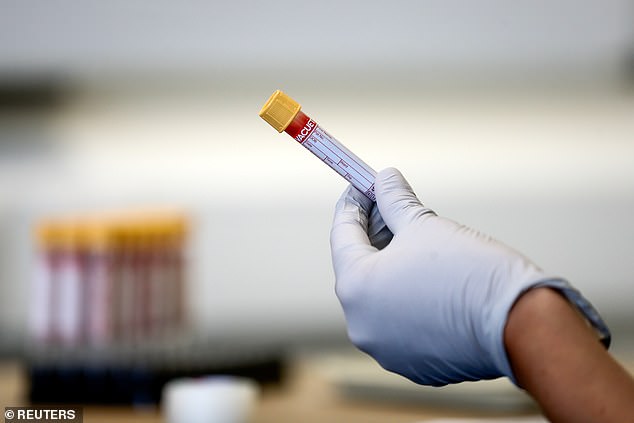 Birmingham University’s test will put these ‘hidden’ victims on the radar – with huge implications for firms, families and schools. Pictured: File photo of a paramedic holding a blood sample from an antibody test at the beginning for June

Birmingham University’s test will put these ‘hidden’ victims on the radar – with huge implications for firms, families and schools. It works by checking for antibodies produced by the immune system when Covid-19 invades cells using its surface ‘spikes’.

By doing so the test picks up many more cases. The researchers say mild victims react to the ‘spikes’, while severe cases seem to react to the virus’s main body.

Alex Richter, of the Institute of Immunology at Birmingham, said the results were based on studies involving 1,000 NHS workers.

She added: ‘We have found that detecting antibodies in people that have been very sick in hospital is quite straightforward, however, it seems that if you have a milder or asymptomatic illness your response may be weaker in existing protein tests.

‘In our test, we are using the correctly folded form of the spike protein, which is the protein the virus uses to binds to cells in the first place. We are getting 98 per cent sensitivity and that is a game changer for testing in the community and for other countries.’ The test, which will be launched next month, relies on the ‘heel prick’ method used for newborns.

Patients could be asked to prick their finger at home and send a dried blood spot card to a laboratory for testing. Dr Richter said this method was as accurate at detecting virus immunity as using blood drawn directly from veins.

Screening for coronavirus has been mired in setbacks and there is confusion about general rates of infection and immunity.

Regulators have banned private laboratories from charging patients up to £100 for Roche and Abbott ‘finger-prick’ tests amid fears they are not as accurate as when blood samples are taken from veins.

While the Birmingham research focuses on the ‘spike’ response, the Abbott and Roche methods check for a protein on the main body of the virus

Public Health England’s assessment of the Roche test reported a 14 per cent ‘false negative’ rate in hospital patients after 14 days. The firm insists it is 100 per cent.

A US study on Abbott’s test found it was 83 per cent accurate ten days after Covid-19 infection, rising to 100 per cent at 17 days.

Tests on health workers suggest a third may test negative in blood while having antibodies in their saliva. This suggests a version of the Birmingham test might be orally administered. The university is launching the test through its spin-off firm, The Binding Site.

A spokesman for Abbot said: ‘Data continues to demonstrate that Abbott’s antibody test has excellent performance.’

Roche said: ‘We have undertaken tests on more than 10,400 patient samples and these results reinforce our initial findings.’