Nicola Sturgeon gets credit for Westminster economic policies on Covid

Scottish voters give Nicola Sturgeon credit for Westminster policies on propping up the economy during coronavirus crisis, poll finds

Nicola Sturgeon is being given credit by Scottish voters for Westminster policies on propping up the economy during the coronavirus crisis, according to a a poll today.

YouGov research found the SNP leader and her ministers are widely praised for support packages for jobs and businesses – even though they have largely been provided by the Treasury.

The results will fuel alarm in Downing Street at Ms Sturgeon’s soaring ratings and increasing backing for independence.

In the poll for The Times, 49 per cent of Scots said the government north of the border had performed well in protecting jobs, with 29 per cent saying it had done badly.

Half were positive about work done by the executive to protect the economy compared with 31 per cent who had a negative view.

However, while Ms Sturgeon’s administration does have powers to vary business rates and income tax, key decisions on VAT, National Insurance and tax allowances are still reserved for Westminster. 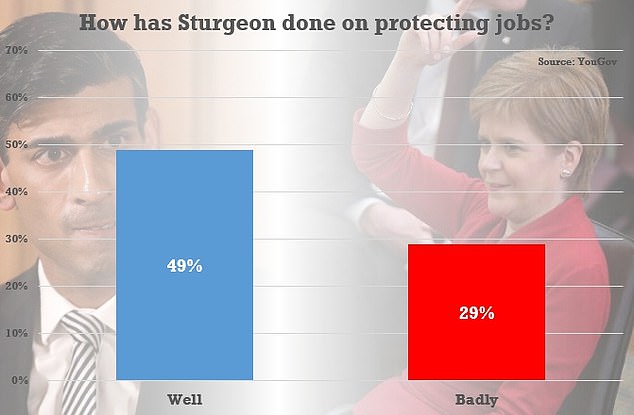 The massive furlough scheme – which has subsidised the wages of 155,000 Scots – was designed and implemented by Chancellor Rishi Sunak and the Treasury.

The findings emerged after YouGov found this week that backing for independence is growing in Scotland.

Excluding ‘don’t knows’, 53 per cent north of the border supported splitting from the UK, compared to 47 per cent who wanted to keep the union.

That was a two point rise from January, and the highest level the firm has ever recorded.

Meanwhile, some 57 per cent plan to vote for the SNP in Scottish parliament elections next spring – which will be critical for Ms Sturgeon’s claim to have a mandate for a new referendum.

A series of other surveys have confirmed a groundswell in favour of independence, with Ms Sturgeon seeing her popularity rise sharply over her handling of the coronavirus crisis.

She had a net rating of plus 50 in the latest YouGov study, up from plus 5 a year ago.

By contrast Boris Johnson’s rating is minus 50, having slumped by 16 points over the past 12 months.

Among senior Tories, only Ruth Davidson, who has temporarily returned as leader of the Scottish party at Holyrood until Douglas Ross takes over, has a positive rating on plus 15.

The poll found support for the SNP was up three points since April to 57 per cent, which would give them 74 members of the Scottish parliament – 11 more than currently.

Mr Sunak was dispatched to Scotland last week to stress the scale of the financial support allocated by Westminster.

And Boris Johnson is planning to spend his ‘staycation’ north of the border with fiancee Carrie Symonds and their baby Wilfred.

In the 2014 referendum – billed as a once-in-a-generation decision – Scots voted by a convincing margin of 55-45 per cent to stay in the UK.

Ms Sturgeon says she has put aside the independence issue during coronavirus chaos, with planning for a fresh vote ‘paused’, but has faced accusations of trying to use the situation for political advantage. 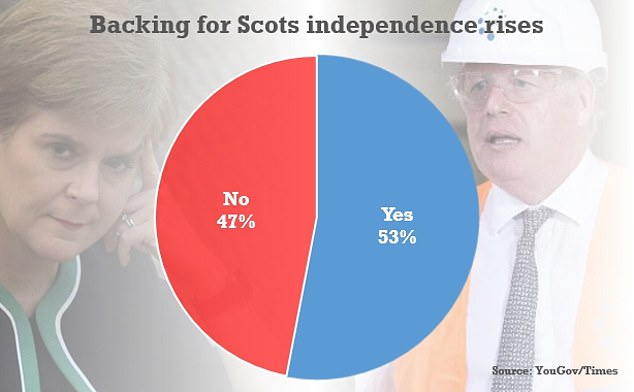 A YouGov poll found that, excluding ‘don’t knows’, 53 per cent north of the border supported splitting from the UK, compared to 47 per cent who wanted to keep the union 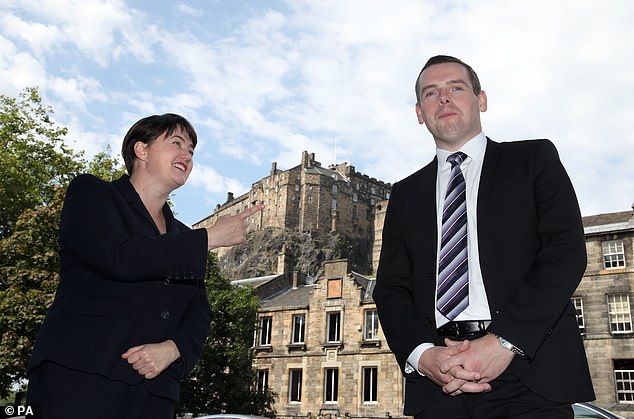 Among senior Tories, only Ruth Davidson, who has temporarily returned as leader of the Scottish party at Holyrood until Douglas Ross takes over (pictured together last week), has a positive rating on plus 15