No ‘boring life’ for engineers who swapped Chernobyl for Metrotunyl

Life in a nuclear wasteland. Can you picture it?

Two French engineers now working on the Metro Tunnel, Nicolas Caille and David Coulet, say it was the challenge of a lifetime. 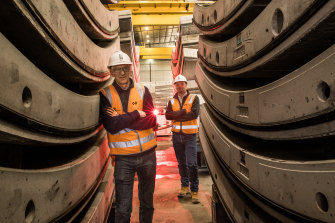 Nicolas Caille and David Coulet, engineers on the Metro Tunnel who used to work on the Chernobyl project in Ukraine.Credit:Jason South

Together, they oversaw construction of Chernobyl’s new safe confinement structure, which was built to contain the remains of the number 4 reactor unit at the nuclear power plant in Ukraine, which was destroyed in 1986.

Strictly off-limits to the public, Mr Coulet describes their Chernobyl worksite of more than five years as a “no man’s land”.

To enter, they first dressed in special suits for protection from radiation and contaminated dust. Then, they donned a fresh layer of clothing, which they had to dispose of before leaving the site.

The pair worked in 40-degree heat in the summer and minus-38 degrees in the winter. 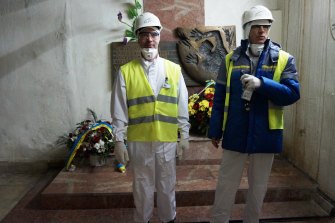 They lived in a town called Slavutych that was specifically built in 1986 about 50 kilometres away from the nuclear plant to house those who were displaced by the catastrophe.

The arch-shaped steel dome they were building to surround the reactor was set to prevent radiation leaking for 100 years.

By comparison, building the Metro Tunnel – twin nine-kilometre rail tunnels beneath the city – might be a piece of cake.

“No,” Mr Caille said hastily. “Everything is totally different,” he said. 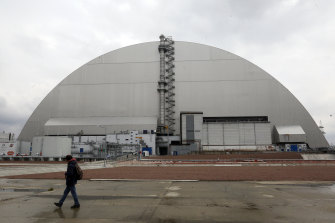 The enormous protective dome over the top of the exploded Chernobyl reactor building. Credit:AP

The structure at Chernobyl is more than 90 metres high and three times the weight of the Eiffel tower. It is longer than two jumbo jets and the total size of the roofing and cladding amounts to 12 football pitches.

The engineers built the 36,000-tonne structure 300-metres away from the reactor and slid it into place – a process that took two weeks. It was the “the biggest moveable structure”, Mr Caille said.

In the world of engineering, this project was like the “Olympic Games”, said Mr Caille, who also described it as a unique challenge that was underpinned by the feeling that they were building something that was “good for humanity”.

While the Metro Tunnel will improve Melbourne’s rail network it may not measure up to these lofty standards but construction-wise, the engineers confess the project has been deeply challenging.

Mr Caille said unlike in Ukraine, where they were working in a wasteland, in Melbourne they are building huge rail tunnels under a bustling CBD.

“You’re building a nine-kilometre tunnel in the middle of the city, in a very dense environment with all the stakeholders,” Mr Caille said.

You “plan everything” when tunnelling underground, Mr Caille said. But ultimately, “you never really know” what lies beneath.

Building two stations in the CBD – Town Hall and State Library – is particularly difficult, he said. “It’s a huge cavern below a high-rise building … and access is difficult.”

When Mr Coulet finished the Chernobyl project, he had a bad case of the “blues”. He feared he might live a “boring life” without a project that was as challenging as the one in Ukraine.

But the task of building an architecturally impressive rail line through Melbourne quickly changed that.

“Here we are delivering world-class architecture for the Metro Tunnel,” he said. “You can imagine the architecture in Chernobyl was not the biggest challenge. It was very much an industrial building.”