A young driver who narrowly missed hitting pedestrians, cyclists and a police officer as he sped through central Melbourne will be released after nine months in jail.

Bryce O’Donnell caused people to run to safety and a police officer to jump out of the way when he drove through the Bourke Street Mall on January 28, hitting a road barrier and bollard after police had tried to intercept the stolen car in a no-vehicle zone in Swanston Street. 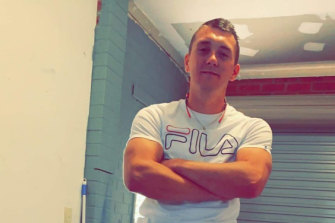 O’Donnell’s erratic and dangerous driving continued as he turned out of Bourke Street and continued through the CBD, where he also narrowly missed hitting cyclists and pedestrians in Swanston Street.

His driving came just over four years after the Bourke Street tragedy of 2017 when six people were killed and many more injured when a driver deliberately ran down people.

O’Donnell, 20, spent a combined nine months in custody this year and was awaiting sentence for the driving offences and other crimes. Magistrate Stella Stuthridge told him he would be released later on Friday and would have to serve a six-month community correction order. 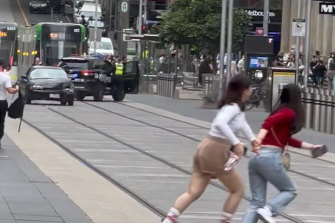 Pedestrians run for safety in the Bourke Street Mall on January 28.

“You placed innocent people, including police, pedestrians and cyclists, at grave risk of serious injury,” she said in Melbourne Magistrates’ Court.

O’Donnell must complete 50 hours of unpaid work and get drug treatment under the six-month correction order. He is also disqualified from driving for two years.

Ms Stuthridge said she had to balance the young man’s crimes with his guilty plea, remorse and prospects for rehabilitation.

O’Donnell had a low IQ, was homeless for part of his teenage years and abused ice and cannabis. But he now had the chance to live with his father in Ballarat and work as a roof tiler.

He pleaded guilty to reckless conduct endangering serious injury, dangerous driving while being pursued by police, offending while on bail and other charges.

He also admitted stealing a car from the Crown casino car park on March 1 last year and stealing power tools, lawn bowls and a mobile phone from other cars. Those items were later recovered.

O’Donnell was arrested after those thefts and spent some time in custody before being released on bail.

Defence lawyer Eleanor Millar told the court on Thursday her client panicked and sped away when police initially tried to intercept the green Mitsubishi Lancer as his bail conditions meant he was not allowed to drive.

After driving out of the CBD he went to Albert Park and abandoned the car near his mother’s home and evaded police for a week, until his arrest in Ballarat on February 4.

Prosecutors wanted him to serve more time in prison given the seriousness of his crimes and to deter him and others from similar offending. He has prior convictions for driving offences.

O’Donnell watched Friday’s hearing on a video link from prison and gave a thumbs-up to another prisoner once sentenced, until the magistrate told him not to respond to his friend.