No new COVID-19 cases have been detected in NSW following a Sydney quarantine worker testing positive after visiting several locations across the city.

Premier Gladys Berejiklian also announced NSW has reached its vaccination target, with 37,500 people receiving their first shot in the opening three weeks of the process including 35,000 with the Pfizer vaccine and the balance with AstraZeneca. 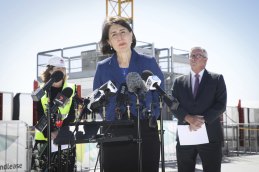 On target: NSW Premier Gladys Berejiklian says the state remains on track to vaccinate the population against COVID-19.Credit:Renee Nowytarger

The state was aiming to vaccinate 80,000 people in the next three weeks, including those already vaccinated who are due for their second Pfizer shot and 45,000 who will get their first shot, the Premier said.

To date, 92 per cent of frontline workers who have been invited to receive a vaccine dose have taken up the offer, leaving potentially 8 per cent unvaccinated. Dr Chant said those unvaccinated people have been sent reminders.

Ms Berejiklian said the proportion vaccinated could be even higher than the 92 per cent reported, with some workers on leave or no longer working in the quarantine system.

As reported on Sunday, a 47-year-old man who worked in two Sydney quarantine hotels, the Sofitel Wentworth in the CBD and the Mantra Sydney Central in Haymarket tested positive for COVID-19 on Saturday evening, ending NSW’s 55-day streak of zero locally acquired cases.

Chief Health Officer Dr Kerry Chant said the security guard worked a shift on the 11th floor of the Sofitel at the same time an international traveller who subsequently tested positive was staying on the floor before being transferred to a health hotel.

Genomic sequencing has revealed the traveller and security guard were a match. They had the B1.1.7 variant of the virus, Dr Chant said. This variant is sometimes known as the “UK strain” and is considered to be more contagious than earlier variants of COVID-19.

Dr Chant said it was unclear how the virus moved between the traveller and the guard.

“At the moment there is not a clear and obvious breach that explains it,” she said.

The infectious traveller did not open his hotel room door while the guard was on shift and the guard did not come within 1.5 metres of the traveller’s door, Dr Chant said.

Health authorities were reviewing the CCTV footage to determine where these two individuals may have come in contact.

Testing is under way of other quarantined workers to make sure there were no other transmissions and travellers staying on the 11th floor of the Sofitel will be held in quarantine for 14 days since the infectious case was transferred from the hotel.

The security guard also worked at the Highpoint Hurstville apartment complex as a building manager during his infectious period. However, Dr Chant said he had no direct contact with residents and the focus of health authorities’ investigation is on his co-workers. The building has been cleaned, she added.

“I would never want to stop a security guard from attending their child’s school … people have lives outside of their jobs,” she said.

The quarantine guard had received his first dose of the Pfizer vaccine, but health authorities did not expect it to confer protection so soon after his shot. Dr Chant said the man’s blood was tested on Sunday and there was evidence that he had “some response” to the vaccine.

“We can’t be absolutely certain they can’t be infected [after they have had the vaccine] but what we would suspect is that they may be less likely to pass it on because their viral load might be lower,” Dr Chant said.

She said three new cases had been detected among returned travellers in hotel quarantine.

The man’s four household contacts returned negative tests on Sunday. They will remain in self-isolation for 14 days.

Anyone who attended Pancakes on the Rocks at Beverly Hills between 10.45am and 12pm on Saturday must get tested immediately and self-isolate for 14 days.

People who were at Dae Jang Kum Korean restaurant at Haymarket between 12.15 and 12.20 in the early hours of Saturday morning, the Capitol Square 7Eleven between 12.20am and 12.25am on Saturday, Bexley Aquatic Centre on Saturday between 9 and 9.30am, Hudson’s Coffee Shop at Hurstville Private Hospital between 8.30 and 9am any day from Monday to Friday last week, or at Hurstville Station Coles between 8 and 9pm on Wednesday should monitor for symptoms and get tested immediately if they develop.

Ms Berejiklian said a confirmed case is always cause for sleepless nights for the government and health authorities but as the vaccination rollout continues cases need to be considered in a different light.

“I’m suggesting there are no risks, of course there is,” Ms Berejiklian said. But she urged other states and territories not to overreact to a single case by closing borders.

Ms Berejiklian said the 55-day streak was almost miraculous during a pandemic, and while the COVID-positive quarantine worker is a concern, it was not surprising.

“No matter how perfect we think the system is, human error or anything that can occur may occur,” she said.

After a COVID-19 infection was detected in a Brisbane hotel quarantine worker last week, NSW Health has advised anyone who has recently been in the Greater Brisbane area to monitor for symptoms.

Anyone who has attended venues of concern identified by Queensland authorities should immediately self-isolate and call NSW Health on 1800 943 553.

Regional and rural NSW gets their vaccines

NSW has begun its vaccination rollout across 99 regional and rural hubs and satellite clinics for healthcare workers and other high risk groups.

Smaller centres will open across several remote areas between March 23 and 29.