Tokyo: North Korean leader Kim Jong-un opened a rare ruling-party Congress this week with a frank admission that his country's economy had "immensely underachieved" in the past five years, and said he had learned "painful lessons" from the experience, state media reported on Wednesday.

Since taking power in 2012, Kim has made a habit of admitting failures even as he celebrates the successes of his regime. In October, he made a tearful apology to the North Korean people for failing to always live up to their expectations, under the twin pressures of sanctions and the coronavirus pandemic and after one of the toughest years for the economy in decades. 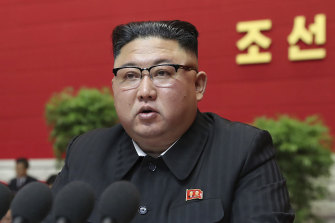 Kim did not flag any fundamental change in direction, however, nor suggest in the Tuesday remarks that he would approach the West cap-in-hand for sanctions relief. The "quickest and surest solution" to the problems North Korea is facing is the "reinforcement of our very own self-reliant power by all possible means," he said.

He also celebrated the regime's "miraculous victories" over the past five years and the "remarkable" achievement of being able to hold the Eighth Congress of the ruling Workers' Party of Korea during a pandemic, as he addressed about 7,000 delegates who were not wearing masks.

But he stressed the "heavy responsibility of leading Korea to a stronger and richer path in this world full of harsh challenges and instability," and finding a "shortcut to bring happiness to the people of our nation."

It was only the second party Congress to take place in the past four decades, with previous gatherings in 2016 and 1980, as Kim appears to move toward a Chinese model of five-yearly meetings to review and chart economic plans. 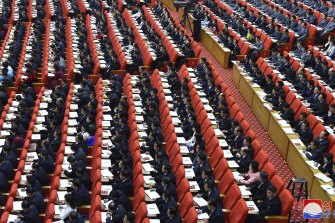 Kim made no mention of the United States in what was a domestically focused speech, although he said that "reactionary forces" who are hostile toward North Korea "suffered severe damage."

But unlike in 2016, he also made no mention of nuclear weapons, and his language left the door open to possible engagement with the President-elect Biden, experts said.

"He's leaving room to deal with the Biden administration," said John Delury, a professor at Yonsei University in Seoul. "It's very hard not to see that as deliberate."

Some experts have expressed concern that Kim might greet the incoming Biden administration with a missile test, as a way of getting Washington's attention and raising itself up the diplomatic agenda. So far, at least, there is no sign of that, and Delury said the two sides are "looking to size one another up."

Lim Eul-chul, an expert on the North Korean economy at South Korea's Kyungnam University, said he saw hints of possible economic reforms in the next five-year plan that should be announced this week as the Congress continues.

"Kim himself is painfully aware of the problems inside the North Korean society," he said.

In his speech, Kim said officials had been dispatched to different parts of the country "to sincerely listen to voices of party members, farmers and workers on the ground".

Lim said that signals Kim's willingness to "understand public sentiment at the grass-roots level and develop a more realistic and effective solution."

After closing its borders soon after the coronavirus pandemic emerged in neighbouring China, North Korea says it has not recorded any cases of the virus, although experts and South Korea's government say this is hard to believe.