The family at the centre of Melbourne northern suburbs coronavirus cluster says the Department of Health and Human Services cleared them to leave their homes two days before one of their children unwittingly attended school while infectious, and did not expressly warn that the young boy should remain in isolation.

The family, who have asked not to be identified for privacy reasons, have expressed frustration at DHHS, saying the department had spread confusion and misinformation about their circumstances and refused to accept responsibility for mishandling their case. 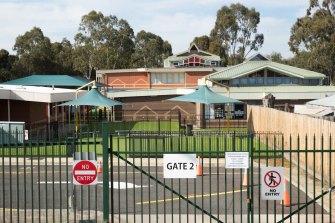 A DHHS spokeswoman responded, saying: “We have sought to protect the privacy of this family and to ensure their health and wellbeing at all times. We have provided all relevant information and clear instructions daily, both written and verbal, and the family has not followed those instructions.”

Twenty-four active cases are now connected to the northern metro outbreak which was sparked after a primary school student attended East Preston Islamic College for two days while infectious, and the outbreak was cited by Premier Daniel Andrews as a reason to delay opening up the city's long-running lockdown.

Health authorities said last week that the year 5 boy had attended school on October 19 and October 20 even though members of his family remained in quarantine at home with COVID-19 infections. Testing commander Jeroen Weimar on Saturday said the family were “expressly told not to” send their child to school.

But the family told The Age that the department had sent an October 17 email that said: “Your family has met the Department of Health and Human Service's (sic) criteria to end isolation”. 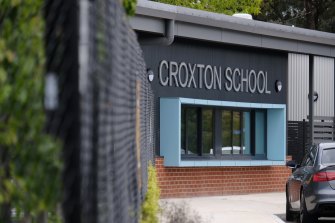 Croxton School has also been locked down due to the northern metro outbreak.Credit:Luis Enrique Ascui

The family was first identified as a close contact of a confirmed coronavirus case on October 6 after a household member who worked as a nurse at a hospital contracted the virus at work. They isolated at a quarantine hotel.

Two days later, on October 8, five of the seven remaining family members were tested following mild coronavirus symptoms. The mother, father and two children received their positive test the following day and continued their isolation at home, while another member of the family also tested positive and chose to isolate at a hotel.

“The entire day [on October 9] they were contacting us about our positive results,” one family member said.

“We are absolutely 100 per cent certain they did not say anything about [the year 5 boy], and even if they did, it was probably just in passing amid an information dump because we don’t remember anything. We were only told [the year 5 boy] needed to get a coronavirus test the following day.

During those phone calls, the family were told a nurse would visit their home on October 10 to test the young boy. He was administered a test that day, but the family say the nurse did not tell them the young boy needed to be tested on day 11 of their quarantine, which re-started on October 9 following the rest of the family’s positive results.

DHHS then contacted the family every day to inquire about their wellbeing and whether their child in Year 5 had any symptoms. The family say they never got a result – positive or negative – from the year 5 boy's test. Then, on October 17, the department cleared the mother, father and two other children of the family and provided them with a certificate so they could attend school and work.

“Thank you for your time earlier today,” the DHHS email stated. “As discussed, your family has met the Department of Health and Human Service's (sic) criteria to end isolation. Please see letters attached. Thank you for your cooperation during this time.”

The family say during conversations on October 17, health officials did not discuss the boy’s situation, so the family assumed the young boy did not receive a clearance certificate because he had not tested positive to the virus.

The family say they were planning to have their son in year 5 tested on October 17 – 11 days after he was first identified as a close contact – but thought they no longer needed to following their phone call with DHHS.

“Due to the phone call and email that did not mention [the boy, we] didn’t take him to get tested,” the family member said. “Considering they called on the 17th, and did not mention any day 11 test, and halted all communications with my [family] from that day on, [we] thought he was in the clear.”

Family members said during this period, departmental officers had contradicted each other, some saying family members needed to be tested on day 11, others that they should be tested immediately, or only when symptomatic. One family member said they had received calls from DHHS saying they were a close contact for a week after they had in fact tested positive.

“The DHHS’ inability to accept any kind of responsibility has caused more stress and frustration to my family/community than the actual COVID-19 has," the family member said.

“I would also like to mention that every member of my family except for one speaks and understands English fluently, my father being a university student in Melbourne many years ago.”