A report has warned the economic cost of months of lost learning due to COVID-19 will be paid over several decades, as students in countries such as Australia complete school with fewer skills and less capacity to contribute to economic growth.

Students in different nations missed out on anywhere between seven and 23 weeks of face-to-face learning in the first wave of the pandemic, the Organisation for Economic Co-operation and Development has found. 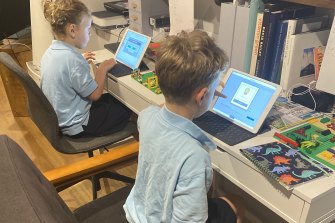 Students in OECD nations missed out on seven to 23 weeks of face-to-face classes due to COVID-19.Credit:Kate Cooper

The disruption to education will not be overcome when they return to normal classes, even if the loss of face-to-face learning is limited to this year's cohort, it said.

Instead, it would lead to a long-lasting drop in productivity that would have a significant impact on the economy. The report also warned that Australia would be one of the countries worst affected by the collapse of the international tertiary student market.

“Because learning loss will lead to skill loss, and the skills people have relate to their productivity, gross domestic product could be 1.5 per cent lower on average for the remainder of the century,” the OECD said in a report published on Tuesday, The Impact of COVID-19 on Education.

Its estimate was based on analysis of historical regressions in economic growth, such as the global financial crisis.

Slower economic growth from the loss of skills in today’s students will only be seen in the long term, the report found.

“In other words, countries will continue to face reduced economic well-being, even if their schools immediately return to pre-pandemic levels of performance,” it said.

“As public funds are directed to health and social welfare, long-term public spending on education is at risk despite short-term stimulus packages in some countries,” the report states. “Private funding will also become scarce as the economy weakens and unemployment rises.”

The report assessed the pandemic’s impact on education in 35 OECD member countries including Australia and found that by the end of June most students had missed at least 10 weeks of on-site classes, with seven weeks being the least time away and a 23-week absence in some parts of China the heftiest loss.

In Victoria, students in years three to 10 will have missed up to 17 weeks of face-to-face classes by the end of term three, putting them among the worst affected in the world.

There is still no confirmed term four return for those students, though the Andrews government’s road map lists October 26 as a potential date for the beginning of a staggered return, depending on public health advice.

Dr Emma Rowe, senior lecturer in education at Deakin University, said it was far too early to measure the long-term economic impact of lost face-to-face learning this year but said she doubted it would last for decades.

"I think that's a real over-exaggeration that it would lead to a lifetime of disadvantage," Dr Rowe said.

"You could actually be arguing that kids might be learning or engaging in more life skills outside of formal schooling, in that they are problem solving in their daily lives or collaborating more with their parents."

Australia is also among the countries worst-affected countries by the collapse of the international tertiary student market.

Twenty-seven per cent of university students in Australia were from overseas before the pandemic struck, and their tuition fees made up more than one quarter of tertiary sector revenue.

Only tiny Luxembourg had a higher proportion of overseas students among OECD nations, the report found.

The report argued reopening schools and universities would bring unquestionable economic benefit to countries, but must be weighed against the risks of raising exposure to the virus and triggering a new wave of infections.

Countries where schools have lower average class sizes would be best placed to mitigate the risk by using social distancing, the report argued.