One billion tonnes in mining emissions approved despite landmark case

Coal and gas projects which could release more than 1 billion tonnes of greenhouse gases have been given the green light by the state government in the two years since a Land and Environment Court ruling which overturned the government's Rocky Hill coal mine approval in part because of climate impacts.

The billion tonnes of greenhouse emissions would be generated by third parties like overseas power plants burning the coal and gas produced over the life of six projects approved since February 2019. The 1 billion tonne figure is nearly double Australia's entire annual greenhouse gas output. 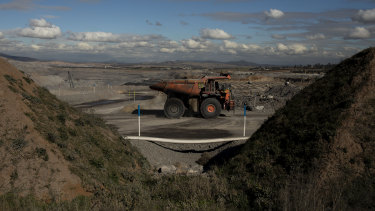 Since a landmark court ruling to curb climate impacts from resources projects, NSW has approved coal and gas projects which would emit one billion tonnes of greenhouse gases. Credit:Dominic Lorrimer

Activist group Lock the Gate Alliance say NSW's project approval agency, the Independent Planning Commission, has been compromised by changes that were imposed by Planning Minister Rob Stokes after the Court rejected the Rocky Hill proposal.

Following that ruling, Mr Stokes issued a statement of expectations in May last year. It followed the commission imposing extra conditions on the Wambo coal mine, and rejecting a proposed coal mine in the Bylong Valley.

Mr Stokes' statement of expectations said the commission should make final determinations within 12 weeks of receiving a project for assessment, and that one of its guiding principles is to adhere to government policy when assessing proposals.

In the Rocky Hill case the Land and Environment Court found scope 3 emissions must be considered – that is greenhouse gases generated when third parties, such as power stations, burn gas or coal for energy.

Lock the Gate NSW spokesperson Georgina Woods said after the commission rejected the Bylong coal project Mr Stokes "kneecapped" the authority. Since then, the IPC had "failed in its obligation" under planning laws to consider scope 3 emissions in its approval of four coal projects and the Narrabri coal seam gas project, she said.

"Long-standing regulation stipulates that the consent authority, in this case the IPC, must consider whether a project should come with conditions that ensure greenhouse gas emissions – including downstream or scope 3 emissions – are minimised to the greatest extent practicable," Ms Woods said.

Mr Stokes said the IPC was reformed following an "extensive review" by the NSW Productivity Commission, and that it was required to consider scope 3 emissions impacts. He accused Lock the Gate of "only telling one side of the story".

"All environmental impacts of projects including greenhouse gas emissions both here and abroad must be considered by the IPC in making a decision," Mr Stokes said. "The IPC [recently] approved more than $1.5 billion in renewable energy projects."

Local farmers last week lodged a legal challenge to the commission's approval of the Narrabri gas project in north-west NSW. The Mullaley Gas and Pipeline Accord, represented by the Environmental Defenders Office, will argue in the NSW Land and Environment Court the IPC wrongly found that it could not address scope 3 emissions from the gasfield.

There are three coal projects under consideration by the IPC which would create an additional 450 million tonnes of carbon emissions over the course of their life.

Lock the Gate said communities impacted by resources projects must be permitted to lodge merits appeals in the the Land and Environment Court.

A merits review is when a third party can reconsider the evidence presented to, and final decision of, an authority like the IPC. Under current laws merits appeal rights are revoked when the Planning Minister directs the IPC to hold a public hearing.