Joanna Masri had just started fertility treatment last year when non-urgent elective surgeries were cancelled due to the pandemic.

“It was awful. We were trying for two years and this was almost like the end of the tunnel. You get your hopes up and then it was paused.”

Ms Masri said her mother had had a hysterectomy when she was 36. “I’m 35 and I have got some women’s problems as well. You do panic and think, ‘This isn’t going to happen for us if this is how things are going to go’.” 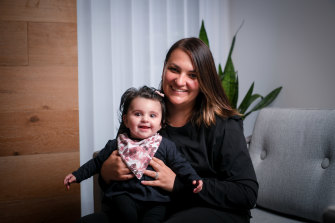 Ms Masri was not alone in having her pregnancy delayed by the pandemic.

New research by the Australian Institute of Family Studies found one in five women reported that COVID-19 impacted on their intentions of having children.

They were more likely to say COVID-19 had affected the timing of having children, typically delaying it, rather than the number of children they would have in the future.

More than one in 10 women with a partner surveyed had been trying for a baby before the pandemic, but of these, 18 per cent ceased trying to conceive at least partly because of COVID-19.

The study showed that financial security played a significant role in women’s decisions, with 62 per cent of respondents who had stopped trying to conceive during COVID-19 having suffered employment loss.

“I’m not surprised because we know the pandemic has caused huge damage to the economy and many people are suffering from job losses and financial difficulties,” said lead researcher on the study Dr Lixia Qu. “If anything I expected worse.”

Women who indicated the timing of their pregnancy was later than they had preferred, commonly reported that their IVF treatment was suspended because of the COVID-19 restrictions.

Others said they waited before trying because they did not want to bring a baby into the world during the pandemic without family support.

The report is part of the Towards COVID Normal series, which interviewed 3730 people in November and December last year. (Of these, only the 1450 women under 45 were surveyed for this report.)

Dr Qu said everyone’s experience was different. “Some people said they had to cancel their overseas trips or put their weddings on hold and the lockdown had made them closer so they decided to have children instead.”

However she said some expressed concerns about being pregnant during the pandemic, saying they didn’t receive the support they otherwise would have.

“The lockdown and restrictions made it harder to get through the pregnancy.”

There were complications with the pregnancy and she had to attend weekly check-ups, due to a high risk of miscarriage, without her husband because of COVID-19 restrictions.

“You couldn’t have a support person with you anywhere. I remember being in tears walking into the room for a scan and just breaking down in front of the sonographer. The first thing I said to her was ‘I think I have miscarried so I don’t even know why we are doing this’. My husband was in the car. It was very difficult in many aspects.”

Ms Masri gave birth to her daughter Amilia in February.

Dr Qu said it would be interesting to see what mark the pandemic leaves on the nation’s future population, with birth statistics to be released by the Australian Bureau of Statistics later this year.

“Then we will see what short-term impacts the pandemic will have on fertility. But it looks like it is consistent with what happened in the previous economic downturn, that the fertility rate may decline over all, even though some pockets might experience a baby boom.”