Homicide squad detectives are investigating the death of a man after he was shot while he lay in a car wreck on a major Victorian highway.

Emergency services were called to the crash scene on the Princes Highway, near Harpur Road, at Corio in Geelong after reports multiple people were injured about 6am on Saturday. 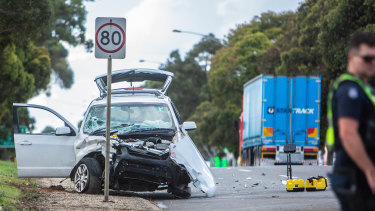 The scene of the crash and shooting on the Princes Highway at Corio.Credit:Scott McNaughton

Detectives believe that three men were travelling east along Harpur Road when their white Ford SUV was struck by a Melbourne-bound Australia Post truck as they turned left into a service road to access the highway.

Witnesses told police two people from a second car, which had been following the SUV from Harpur Road, approached the damaged vehicle with at least one person firing shots inside, before fleeing the crash site.

The front seat passenger in the SUV, a 43-year-old Norlane man, died at the scene from gunshot wounds, police said. Two other men – a 28-year-old from Grovedale and 27-year-old from Norlane – were taken to Geelong hospital with minor injuries from the crash.

The truck driver was not injured.

Police believe the shooting was a targeted attack and detectives are investigating whether another shooting in Norlane about 30 minutes prior to the fatal attack is linked.

It’s unclear if the victim sustained his fatal gunshot wounds before or after the car crash.

Detective Sergeant Sol Solomon, from the homicide squad, said ballistics experts were working to determine how many guns were used in the attack with at least two bullet holes clearly visible on the car.

He said the victim was known to police, but very little else was known about him. 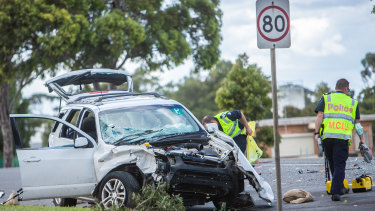 “It’s a combination of a very nasty road collision which ended up in what appears to be a fatal shooting,” he said.

“From what we’ve been able to glean so far from the very sketchy information we’ve got … is it’s shaping up to be a targeted attack.

Sergeant Solomon said Major Collision Investigation Unit specialists were assisting in the investigation and helping to reconstruct the crash.

His message to those responsible: “We will identify you.”

“These are people that have just been involved in the taking of someone’s life with a firearm,” Sergeant Solomon said.

“It’s in everybody’s interest including their own to be arrested and taken off the streets and the firearm to be seized.”

“It would be advisable just to hand yourself in now.”

Nurse Sheryl Vale lives a few houses away from the scene of the shooting and was getting ready for work when she said she heard three gunshots ring out.

“We get a lot of different noises in this area all the time but after I heard the second and third bangs I knew they were gunshots,” she said.

“I saw the two cars go flying past my house and heard yelling before a third, final gunshot. Then the sirens started.”

Ms Vale estimates the two cars were travelling about 100km/h down her residential street before reaching the freeway. 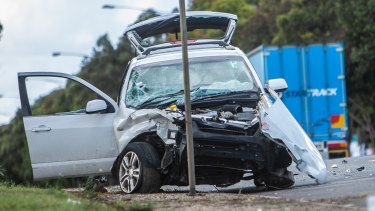 One man died at the scene.Credit:Scott McNaughton

“If I had of left home a couple of minutes earlier I potentially could’ve been caught up in that mess – it is rather scary.”

Mother Lorraine, who did not want her surname used, said she was driving through the Corio and Norlane areas to collect her son from work about 6am when she saw a speeding car. Minutes later, she said, police and paramedics whizzed past.

When she returned to the area soon after she said the whole highway was blocked off.

“I saw a large truck and an large orange tarp. It wasn’t until later at home I found out someone was shot and died at the scene,” she said.

“I would have been at the lights around 6am. Way too close of a call.” 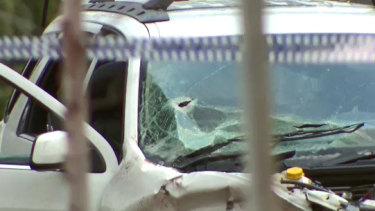 A fatal shooting at Corio this morning iCredit:Nine

A State Emergency Services tent was set up for much of the day, next to a damaged white vehicle, to preserve the crime scene.

A bullet hole can be seen in the front windscreen.

Traffic diversions are in place and motorists are being urged to use the Geelong Ring Road instead.

It’s not the first time shots have been fired across the busy stretch of road.

In 2014, a man was filling his truck with fuel at the nearby North Geelong when a second group opened fire. As the victim fled the scene in a car, the group followed, firing a sawn-off .22 rifle across traffic.

One of the bullets was later found lodged in the Ford Motor Company building across the dual lane highway.

Anyone with information on the latest shooting, including dashcam footage, is urged to contact Crime Stoppers on 1800 333 000.