Home » World News » One year later, families of Americans massacred by Mexican cartel say next to nothing has changed

One year later, families of Americans massacred by Mexican cartel say next to nothing has changed

Three arrested in connection to Mormon family massacre in Mexico

Three suspects have been arrested in connection to the murders of nine Americans living in Mexico.

Under a clear blue sky like any other ordinary Monday morning, a caravan of cars filled with family members of dual American-Mexican citizens traveled along a dusty track through Sonora from their quaint family village of La Mora.

It all changed in an instance.

The caravan was assaulted in the crossfire of cartel violence and three women and six children – including twin babies – were shot dead. Some of their bodies burned to ash in the carcass of scorched cars. Seven other children – five of whom were shot and survived the barrage of bullets – ran for about nine miles through plumes of smoke to safety.

They were all members of the extended LeBaron family, who live in a decades-old settlement in northern Mexico some 70 miles south of Douglas, Arizona. The settlement was founded as part of an offshoot of the Church of Jesus Christ of Latter-day Saints.

The savagery of the killings immediately struck a raw and angry nerve. Both Washington and Mexico City vowed to hunt down the perpetrators and hold them accountable.

However, nearly a year — Nov. 4, 2019 — removed from that tragic day, more questions than answers linger as the lives of the devastated families remain halted in time.

"The whole structure is rotten to the core, they (authorities) have told us they are putting more resources into solving this than any other massacre in history, but a year on no one has been convicted for pulling the trigger," Julian LeBaron, a family spokesperson and activist who lost several love ones in the calamity, told Fox News. "Everyone promised us they would take each person who participated and bring them to justice, but I don't know what that means."

A series of questionable arrests were made at the behest of Mexico's Fiscalía General de la República or Office of the Attorney General. Family members were quick to protest the innocence of what some deemed to be the "fall guys."

Mexican officials allowed FBI agents to assist in the cross-border investigation. When reached for comment, the FBI referred the matter to Mexican authorities. The Mexican Foreign Ministry did not respond to a request for further comment.

Leah Staddon from Queen Creek, Arizona – who lost a number of relatives in the brutality – said the moment is seared into her conscience, something she will never forget.

"I was at home in Phoenix, and someone shared on one of our family chat groups a voice recording of my 23-year-old niece, she was screaming about a vehicle burning – that it looks like one of our vehicles," she recalled.

Since then, some of her relatives have relocated stateside permanently, but a number of them continue to move back-and-forth.

Staddon said the five children who sustained bullet wounds are still suffering from the physical and psychological ramifications from the attack. “The world just kind of moves on, yet our family will be hurting forever over this,” said Staddon, “It is crazy that it has been a year; some days, I wonder if it really happened. It still feels like a bad dream."

Since authorities have still been unable to put the pieces of the painful puzzle together mourning relatives fear they never will.

"I was just so angry when all this happened,” stated Staddon, “I still don't know what is going on and what to believe." 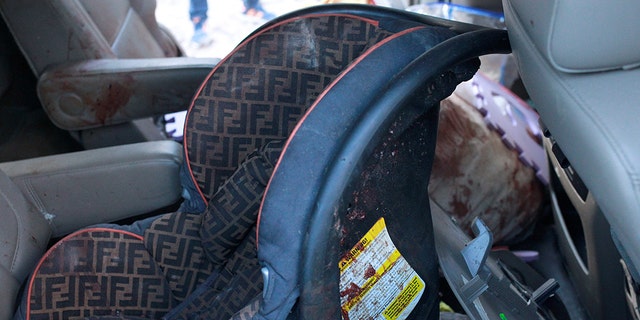 A security baby car seat stained in blood is pictured in a bullet-riddled vehicle belonging to one of the Mexican-American Mormon families that were killed by unknown assailants, in Bavispe, Sonora state, Mexico November 5, 2019. REUTERS/Jose Luis Gonzalez

In the massacre’s aftermath, fingers were promptly pointed at the Juarez cartel, which was in the midst of a fast-growing rivalry with the Sinaloa Cartel, formerly run by the infamous and now jailed Joaquín “El Chapo” Guzmán.  The Juarez cartel had earned a chilling reputation for its ruthless ways — from beheading their adversaries to piling limbs in public places — as a word of warning to imbue terror among law enforcement and the local population.

In recent years, the La Mora community had found itself ensconced in a country crowded by growing conflict, as territorial competition between the cartels escalated. The tight-knit religious group had been subject to abductions for ransom and at least one murder in addition to credible death threats.

Still, the official narrative stands that the families were in the wrong place, at the wrong time. They were mistaken as belonging to Juarez's rival cartel wings or crime outfits La Linea or the Sinaloa-aligned Los Salazar, or just caught in the hail of collateral damage in an all-out shoot out between warring factions. 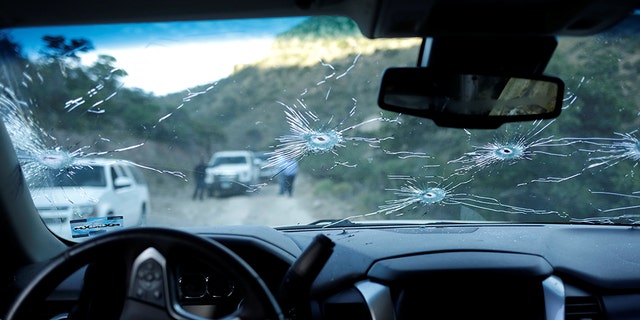 The interior of a bullet-riddled vehicle belonging to one of the Mexican-American Mormon families that were killed by unknown assailants, is pictured in Bavispe, Sonora state, Mexico November 5, 2019. REUTERS/Jose Luis Gonzalez –

Yet one of the cars – carrying Rhonita Miller LeBaron and her children – was then hauntingly set alight. In another vehicle, Christina Langford Johnson pleaded to be spared. Instead, she was barraged by bullets; her broken body recovered alongside lifeless babies – raising red flags.

It took authorities more than eight hours to arrive on the scene. Family spokesperson LeBaron, who was at the time in Chihuahua, said he rushed through the remote foothills and made it to the apocalyptic place in six hours – long before police arrived.

"When they burned the vehicle, we don't know if those women and children were still alive," LeBaron noted. "There was a tiny baby inside one of the cars all shot up; I rescued that baby." 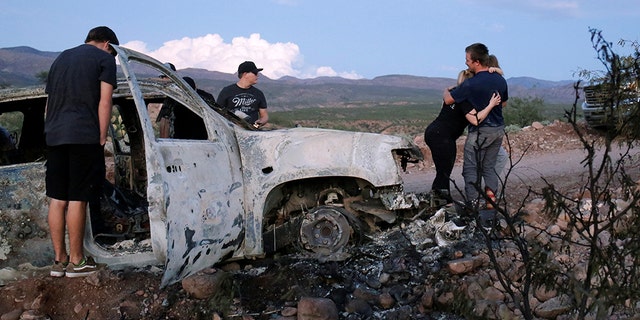 Relatives of slain members of Mexican-American families belonging to Mormon communities observe the burnt wreckage of a vehicle where some of their relatives died, in Bavispe, Sonora state, Mexico in November. A police chief has been arrested for suspected links to the killings, authorities said this week. REUTERS/Jose Luis Gonzalez

Ed Cauldron, a drug cartel expert and former Mexican law enforcement officer, contended that hours before the ambushes happened, there were cartel-related skirmishes on the roadside, indicating that the cars might have taken a wrong turn into the firestorm.

"The only ones who normally drive in that area are government or cartels. They ambushed back to front – classic ambush – and when they found out who they killed, it is likely they burned the car to get rid of the evidence," he conjectured.

Cauldron deduced that based on raw intelligence, the cartels themselves "took care of some of the perpetrators." The revenge killings materialized because of the anger over the murder of women and children, but also because of the heat the incident brought on the cartels by the U.S. government – something they work hard to avoid.

Despite the bitter history of those who dare speak out against the cartels on a prominent platform, the family is refusing to disappear into a dark hibernation.

In July, the LeBarons, Langfords, Millers, Rays, and Johnsons – all noted members of the Mormon sanctuaries in Sonora and Chihuahua — filed a federal lawsuit alleging that the Juarez drug cartel conducted the assault as a reckoning for their public protesting and rhetoric against the group's encroachment in the region.

According to the suit, which was filed in U.S. federal court in North Dakota, where some members reside, Mexican prosecutors have pinpointed over 40 suspects and arrested and indicted nine members of the Juarez cartel.

It marks one of the first civil steps against a drug syndicate south of the border. The families are seeking unspecified monetary damages for seven claims, which vary from inflicting emotional distress to acts of international terrorism. 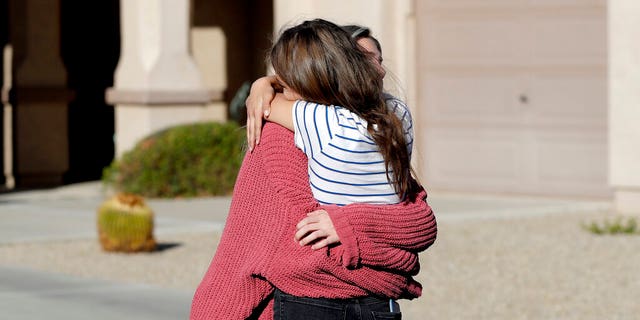 Madelyn Staddon, right, a relative of some of the members of a Mormon community who were attacked while traveling near the US-Mexico border, embraces a neighbor outside her home, Tuesday, Nov. 5, 2019, in Queen Creek, Ariz. Drug cartel gunmen ambushed three vehicles along a road near the state border of Chihuahua and Sonora on Monday, slaughtering at least six children and three women from the extended LeBaron family, all of them U.S. citizens living in northern Mexico, authorities said Tuesday. (AP Photo/Matt York)

Mexican President Andrés Manuel López Obrador has visited the grieving community numerous times, most recently last month, Staddon said. He has promised to build proper highways to replace the dirt tracks snaking from their ranches into Arizona in the next couple of years, as well as bolster military security. 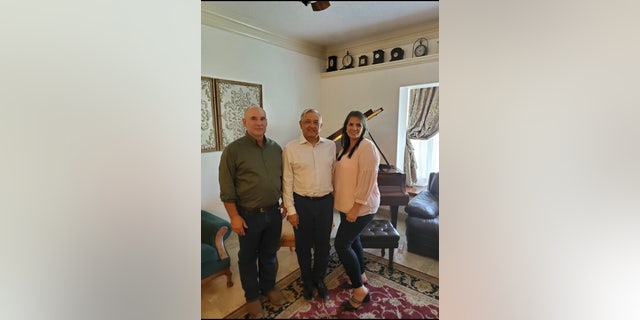 Mexican President Andrés Manuel López Obrador has visited the grieving community numerous times, as recently as last month. He has promised to build them proper highways to replace the dirt tracks snaking from their ranches into Arizona in next couple of years, as well as bolster military security. (Courtesy Staddon Family)

"There are people trying to help, there is a lot of promising going on, a lot of people involved," Staddon observed.

The LeBarons won't stop until their voices are adequately heard and concrete action is taken.

In the weeks after the grisly attack, some of the family members started a petition to the White House to designate cartels as terrorist organizations. President Trump mulled and threatened the idea – declaring war on the Narco outfits – but it has yet to come to fruition, in large part to keep from a diplomatic spat between neighboring governments.

Then in late January, a number of victims' relatives took to the dusty highways and crowded streets in their fight for "truth, justice, and peace" – marching more than 50 miles from the town of Cuernavaca to the President's National Palace, raising further tensions.

With the 2020 U.S. Presidential election happening just a day before the first anniversary of the massacre, the families are gearing for a renewed campaign for change, regardless of whether it will be a Trump or Joe Biden victory.

"What we really want to do is create a movement to hold authorities to account, not just for our families but all families. People are murdered every day by these cartels," LeBaron added. "We need clout and support from the U.S. to stay safe. This isn't a political movement. Politics divides us, and we want to unite. But this cannot go on."