Oxford University has confirmed 61 coronavirus cases among its staff and students after carrying out more than 700 tests.

The prestigious institution has now recorded 91 cases through 1,631 tests since it started checks on August 20.

The latest infections came on the week the majority of the students returned to the city for Fresher’s Week ahead of the first semester.

Meanwhile three East Anglia University students were fined £10,000 each for throwing a huge house party for up to 100 people.

And 32 from Essex University were fined £200 each by police on Monday for being caught ignoring the ‘Rule of Six’. 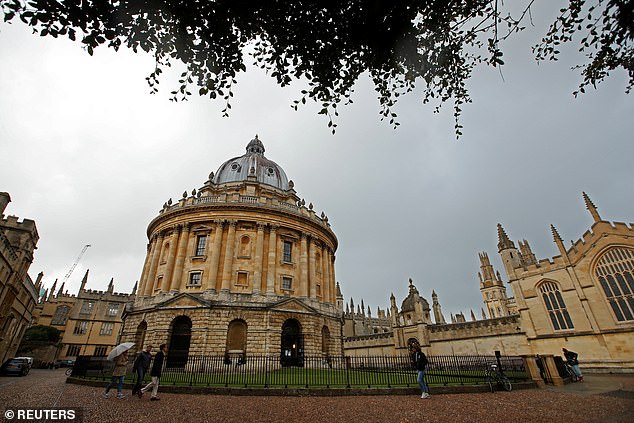 Oxford University (pictured) has now recorded 91 cases through 1,631 tests since it started checks on August 20

Oxford University has two testing sites in the city – a central testing area in Radcliffe Observatory Quarter and a second at the Old Road campus in nearby Headington.

But its website explained the new cases did not include positive test results received outside of the university’s own testing service.

It added: ‘Due to the time interval between a test being done and the result becoming available, it is expected that there will be a mismatch between actual results and those confirmed to us on any given day.’

Oxford University has a four-stage emergency response to the pandemic, depending on how wide the spread of coronavirus is.

The university is at stage two, which stated: ‘University operates in line with social distancing restrictions with as full a student cohort as possible on site; teaching and assessment taking place with the optimum combination of in-person teaching and online learning; and the minimum possible reduction in research capacity.’

The party at East Anglia University was held at a house on Bowthorpe Road in Norwich before being broken up by officers from Norfolk Constabulary.

The force said three women, one aged 19 and two aged 20, were given fixed penalty notices for breaking rules banning gatherings of more than 30 people.

The students at the party received the maximum fine available for organising an illegal gathering.

According to the rules, those who only attended the party but were not involved in organising it could also have been fined £100.

A spokesman for Norfolk Constabulary said: ‘Officers were called to reports of a gathering at an address on Bowthorpe Road in Norwich at approximately 1.10am on Sunday 11 October 2020. 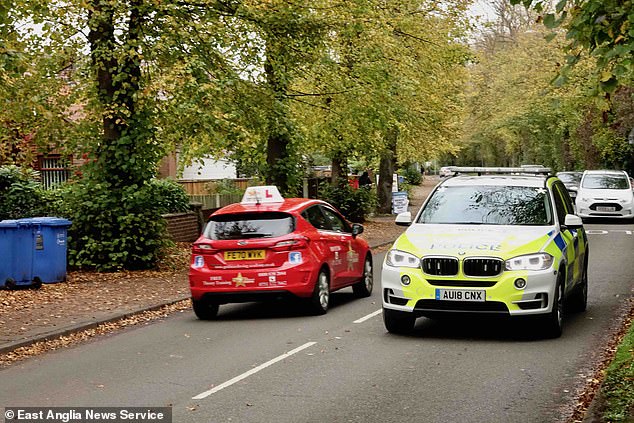 Police are pictured on the road where the huge party was, hosted by University of East Anglia students 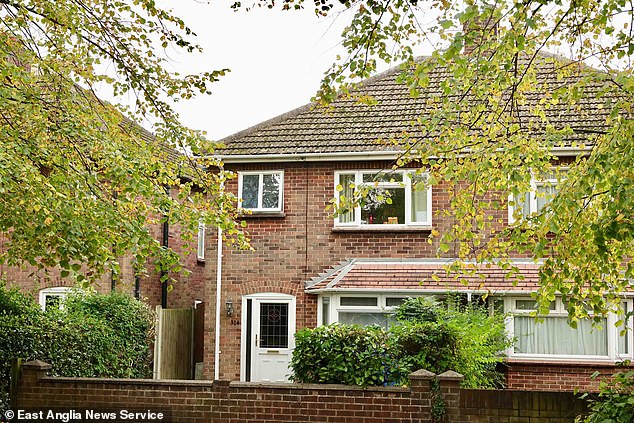 Pictured is the house on Bowthorpe Road in Norwich city centre, which saw the mass gathering 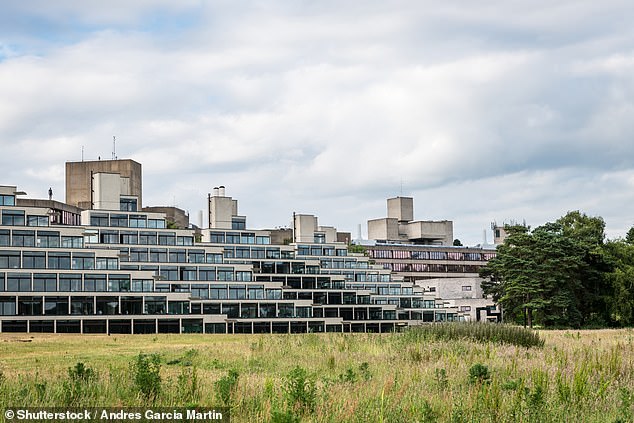 Three East Anglia University students have been fined £10,000 each for throwing a huge house party which up to 100 people attended. Pictured: File photo of the University of East Anglia

‘On arrival officers found up to 100 people attending a party at the address.

‘Officers dispersed the gathering and three occupants at the address, a 19-year-old woman and two 20-year-old women, were issued with the fixed penalty notice for contravening the ban on being involved in holding a gathering of more than 30 people.’

The force added: ‘As a police force, we fully appreciate how difficult the past six months have been for the county and we are pleased that the vast of majority of people have played and continue to play their part, following the guidance and legislation helping to protect Norfolk and prevent the spread of COVID-19.’

The firm approach taken in Essex came after a video circulated online last week, appearing to show dozens of students breaking the rules with a large party, with officers having made ‘repeated warnings’.

Four groups of up to nine people, some of whom had attended house parties while others had met in other areas on the Colchester campus, were approached and ordered to pay the fines by officers on Friday and Saturday night.

But some on social media were critical of the force’s action over the weekend, despite the patrols being well-publicised.

Anger centred around issuing fines to a group gathered in a university car park, with one user responding to the police’s post about it by calling them ‘pathetic bullies’.

Another wrote: ‘I honestly read this believing I would hear that Essex police had broke up a big house party and issued fines, but no. 7 people in a car park. 8 people in a house. 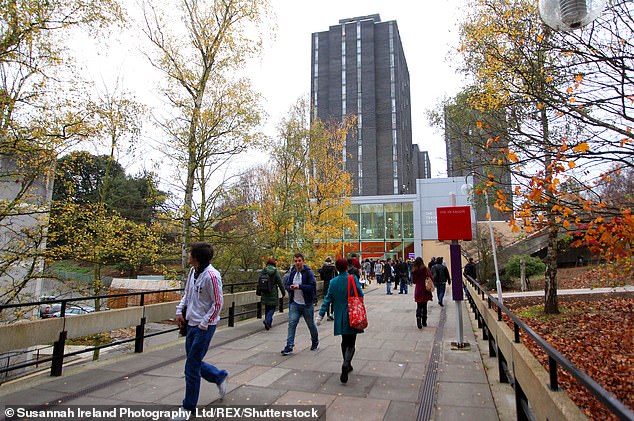 Some 32 students, some of whom had attended house parties, while others had met in other areas on the Colchester campus, pictured, were approached and ordered to pay £200 by officers over the weekend

‘And they come on Facebook to brag about it! SHAME ON YOU ESSEX POLICE.’

The force says it has been working closely with campus staff to offer support in engaging with students, and ensuring they understand and follow the restrictions.

The university has put a series of measures in place to make sure students follow the guidelines and are doing their bit to stop the spread of the virus and keep each other safe.

The majority of students have listened and followed the current guidelines, but Essex Police says a ‘small minority’ continued to break the rules and officers stepped up patrols at the campus and surrounding areas over the weekend.

On Friday night officers found a group of seven people congregating in a car park at the university, all of which were issued with £200 fixed penalty notices.

On Saturday evening, officers were called to two house parties in Albany Road, Colchester, both of which had eight people inside, all of whom were issued with fines.

And during a foot patrol on the campus with university security staff on Saturday night officers also came across nine students from different accommodation who were congregating in a courtyard and they were also issued with fixed penalty notices.

Chief Inspector Rob Huddleston, District Commander for Colchester said: ‘We have worked really closely with the University of Essex to support them in explaining the current restrictions to their students around the rule of six. 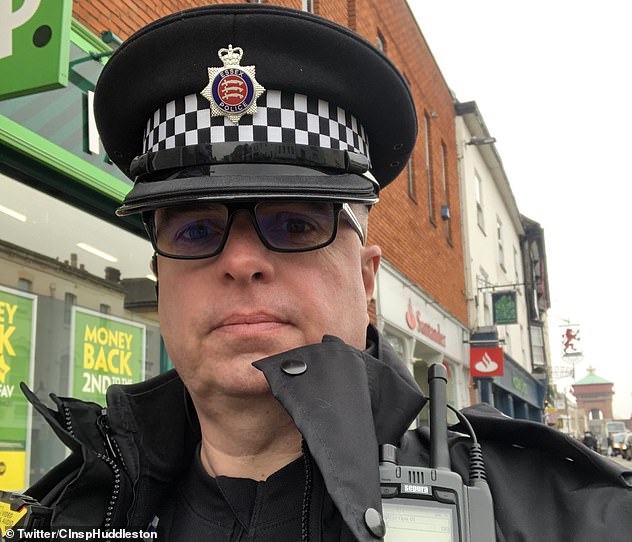 Chief Inspector Rob Huddleston, District Commander for Colchester, pictured, explained that enforcement action will be taken against those who ‘do not listen to us and selfishly flout the rules repeatedly’

‘Our approach is always to explain and engage with people first around the current Covid-19 regulations, as we want to give people the benefit of the doubt and the opportunity to do the right thing and stop the spread of the virus.

‘However, as we have always said, where people repeatedly flout the rules, we will take enforcement action. Sadly, this turned out to be the case over the weekend where, during our patrols, we found groups meeting up, and in two cases having house parties.

‘We don’t want to ruin anyone’s fun, but we all have a legal and ethical responsibility to stop the spread of the virus, protect each other, our communities and the NHS.

‘In cases where people do not listen to us and selfishly flout the rules repeatedly, they can expect that we will deal with them by taking enforcement action.

‘Ultimately we all want the same thing – to stop the spread of the coronavirus and to see police officers doing what they do best, protecting victims and the vulnerable and catching criminals, so please help us do that by following the rules.’

Last week saw a video posted online of around 30 youngsters, believed to be students at Essex, ignoring the Rule of Six and partying.

It led to one staff member admitting they are concerned about returning to campus, claiming to feel ‘like a canary in a coal mine’, according to the Daily Gazette. 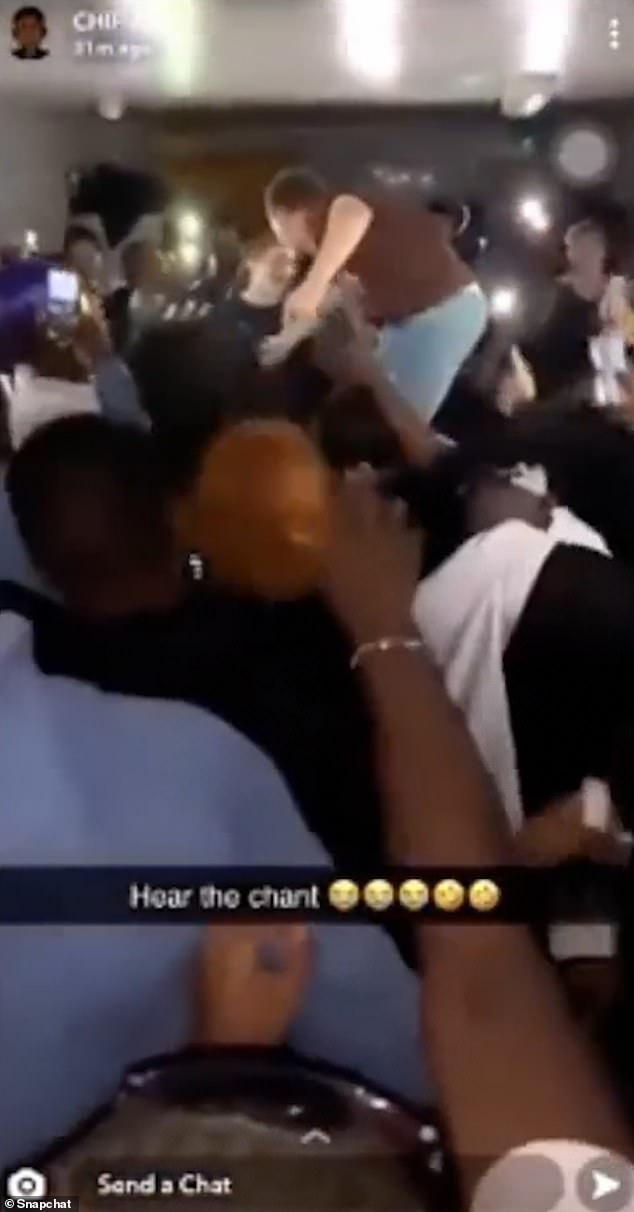 The firm approach was taken after a video circulated online last week, appearing to show dozens of students flouting the rules with a large party, with officers having made ‘repeated warnings’

Vanessa Potter, Director of External Relations at the University of Essex said today: ‘The University is committed to the health and wellbeing of our students and the wider community.

‘At this challenging time, we have made clear that all students must comply with Covid Regulations, and we are really proud that they are almost all taking this seriously and doing so.

‘We were made aware of a few who were not, and so we asked the police to support us in managing these cases.

‘This is not about stopping people having fun; it is about protecting the wider student population, our staff and the local community. We continue to work in partnership with our students and Essex Police to ensure we keep everyone safe.’

Fixed penalty notices of £200 can be issued to those caught taking part in gatherings of more than six people, this will reduce to £100 if paid within 28 days.

For persistent offenders the fixed penalty amount doubles for each subsequent offence. Those caught organising an unlawful gathering can face a fine of £10,000.