Home » World News » Pablo Picasso palette is expected to fetch up to £6,000 at auction

Pablo Picasso palette is expected to fetch up to £6,000 at auction

Paint-splattered palette used by Pablo Picasso is expected to fetch up to £6,000 at auction

Some artists are only feted after their death, but Pablo Picasso was different – and he was acutely aware of it according to this piece.

The extraordinary relic, pictured, is one of more than 60 lots in a forthcoming Sotheby’s online Picasso auction. 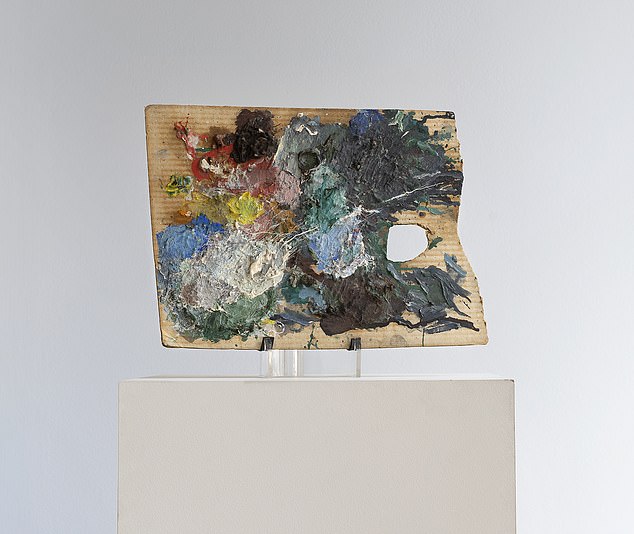 A paint-splattered palette owned by Pablo Picasso, which he dated after using it, is expected to sell for £4,000 to £6,000 in a Sotheby’s online auction from June 8 until June 18. Experts say its colours correspond to his 1961 work Le dejeuner sur l’herbe (after Manet)

A Sotheby’s spokesman said: ‘Ever aware of his own legacy, Picasso dated the palette, elevating its status and significance with his signature wit.

‘Picasso enjoyed his celebrity status, with one notorious anecdote telling of the artist’s refusal to sign a drawing that he had been asked to leave for a restaurant manager in lieu of payment, quipping “I’m buying a meal, not the whole restaurant”.’

Other unusual items in the auction include a rare woodcut print of a chick which Picasso gave to his friend Guillaume Apollinaire, the French poet and novelist whom he first met when they were both in their mid-20s around 1904.

Created shortly before Picasso relocated to Paris from Spain, it depicts the façade of the Barcelona bull-ring and a well-heeled crowd gathered around its entrance.

Dating to a summer holiday in Cannes with his wife Olga and son Paolo, it reveals the artist’s preoccupation with his beautiful mistress and muse Marie-Thérèse Walter.

Holly Braine, Sotheby’s Impressionist and Modern Art Specialist said: ‘This sale allows the viewer to explore the full gamut of his production.’

Bidding opens on June 8 and lasts until June 18.

The works will be exhibited from June 15 to 18 at Sotheby’s New Bond Street galleries in London.