Paramedic who tested positive for coronavirus shares diary of symptoms

Paramedic, 24, who tested positive for coronavirus without a cough or fever shares her diary of symptoms and reveals she couldn’t even smell or taste raw garlic, ground coffee or cinnamon as she battled infection

A paramedic who tested positive for COVID-19 has warned it can trigger unusual symptoms after she became infected without suffering a cough or high temperature.

Kirstine Adkin, 24, said her senses were so severely impaired by the disease that she couldn’t smell or taste even pungent foods like garlic, ground coffee or cinnamon.

The NHS medic, from Poole, Dorset, first began suffering with headaches and back pain but initially put it down to stress at work.

But her condition swiftly deteriorated and she was soon left struggling to breathe. 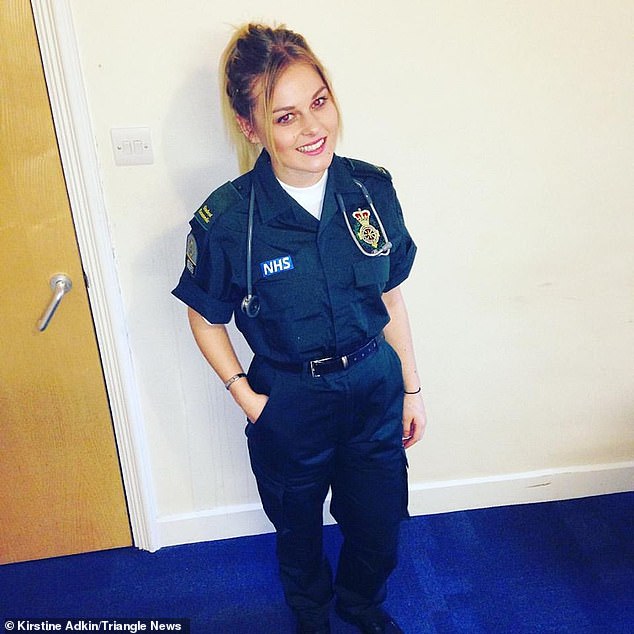 South Western Ambulance Service paramedic Kirstine Adkin, 24, has released a week-long diary of her symptoms after she contracted coronavirus without having a cough or a fever

The South Western Ambulance Service medic is now warning people to be on the lookout for less obvious symptoms and to heed Government advice to stay indoors.

She said: ‘I’m a 24-year-old girl working on the front line as an NHS paramedic.

‘I tested positive for COVID-19 and wanted to share my experience to warn others who display less ‘obvious’ symptoms like I did at first.’

She added: ‘I am now well and I’m feeling very grateful that I am able to continue to work when so many people are facing real hardship during this crisis – I’m one of the lucky ones right now.’

Dorset-based Kirstine decided to share a diary covering her week-long fight against the deadly virus which has so far claimed more than 21,000 British lives.

Day 1 – I developed severe headaches above both eyes, which got worse and worse. The worst headaches I’ve ever had.

Day 2 – I woke up with a headache, but put it down to stress headaches. Given the current situation at work, I didn’t think a headache was very significant.  About midday I started getting a really achy back. Again, working as a paramedic involves lifting people down the stairs.

It’s not uncommon for me to get an achy back. However, that night the pain in my back was so bad I realised that this probably wasn’t my normal aches.

Day 3 – I woke with full body aches still mostly in my back and my head. I called in sick, still unsure whether I was doing the right thing as I didn’t have a cough, and no temperature.

Was it just a bad back and headaches due to the stress we’re all under? Later that day everything got worse, I didn’t leave bed, and by the evening I had some pains in my chest and felt a little breathless when moving around.

I decided to disinfect my surfaces in my bedroom, and that’s when I realised I couldn’t smell a thing. I proceeded to smell everything around the house, but absolutely nothing!

Day 4 – The aches and pains started to improve. Only today I developed a slight dry cough. The coughing was constant for an hour or two in the morning but then was so spread out I’d maybe only have an episode of coughing once every four hours.

I realised today that I also couldn’t taste, although I probably couldn’t yesterday but I didn’t eat anything to notice.

Day 5 – Aches gone, but still feeling very tired. Smell and taste still completely gone. Like, I can literally eat cinnamon, raw garlic, ground coffee and I can not taste or smell it at all! Yes I have tested almost everything I could find.

Day 6 – Feel my normal self but still no taste or smell, which is very upsetting when your a big foodie like me but I’m grateful I’ve recovered with only mild symptoms, my heart goes out to all those seriously poorly.

On the first day she described the ‘worst headaches I’ve ever had’ above both eyes.

These got worse and worse but proved to be the extent of her problems at the beginning of the week.

She later became achy but felt this was a common occurrence given her job as a paramedic involves her having to lift people up.

‘It’s not uncommon for me to get an achy back,’ she said.

‘However that night the pain in my back was so bad I realised that this probably wasn’t my normal aches.’

With no respite on the third day, Kirstine was forced to call in sick even though she had no cough or temperature.

But her back was still severely aching and her headaches had not subsided.

‘Later that day everything got worse, I didn’t leave bed, and by the evening I had some pains in my chest and felt a little breathless when moving around,’ she explained.

With an increased focus on cleanliness, the 24-year-old made the decision to disinfect all her surfaces in her bedroom when it became apparent that she ‘couldn’t smell a thing’.

She said: ‘I proceeded to smell everything around the house, but absolutely nothing!’

The fourth day saw the emergence of a ‘dry’ cough which was constant ‘for an hour or two’ first thing in the morning.

Coughing became less frequent as the day wore on but the biggest development for Kirstine was that she had now lost her sense of taste.

The feeling of aches and pains had disappeared on the fifth day but she still felt particularly worn out and tired.

In terms of taste, she said she could ‘literally eat cinnamon’ and ‘raw garlic’ and not taste a thing.

Her sixth day at home saw her mild symptoms disappear but the diary has been released to help raise awareness for those who may not be showcasing fevers or possessing long-lasting coughs.

Kirstine – who is now returning to work on the front line – said symptoms manifest themselves differently in each person and has begged people to obey the lockdown to protect NHS staff and key workers.

She added: ‘So no temperature for me, only a mild, mild cough. For me the other symptoms of COVID – headaches, muscle aches, fatigue, loss of smell and taste – were more prevalent. 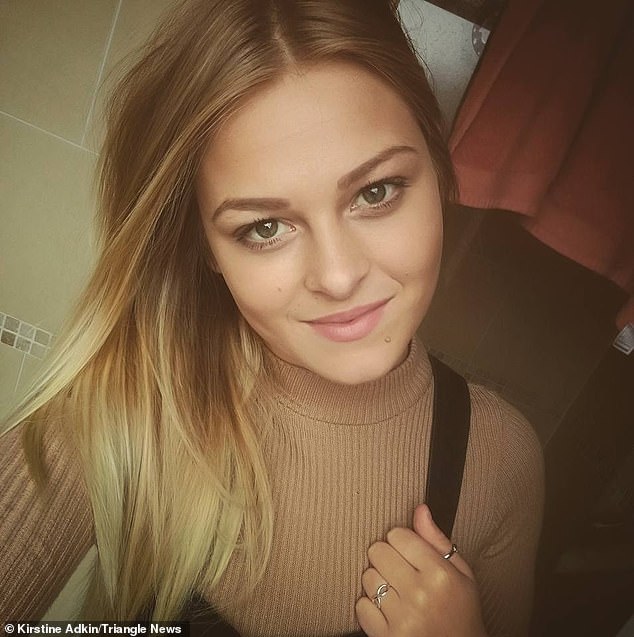 The 24-year-old has released a six-day diary detailing how she went from a headache and a bad back to realising she had lost her sense of smell, sense of taste and being left breathless

‘Just goes to show that this disease affects each of us differently.

‘I know the Government guidance is a persistent cough or a temperature, but I had neither, so please don’t take the risk and stay at home if you start to develop the other symptoms too.

‘Side note: Whilst I was still working last week there were so many cars still on the road. Blatant ignorance to the advice we’ve been given which is for our benefit.

‘I will go back to work next week, to help those that need it. Please stay home for me and all of us NHS/key workers and our families.’