So, it’s happened again – a group of young men, allegedly from a private school in Melbourne, this time Wesley College – reportedly making loud, “disgusting” comments about women. Last time such behaviour was highlighted by the media, it was students from St Kevin’s College in Melbourne who were filmed chanting a sexist song on a packed tram.

On this occasion, the behaviour was so extreme that the bus driver felt the need to apologise to some passengers, who presumably felt so disturbed and/or threatened that they disembarked. Full praise should go to the St Michael’s student who reported the matter to the Wesley College administration and to the principal of Wesley, Nick Evans, for a swift apology and thoughtful response. 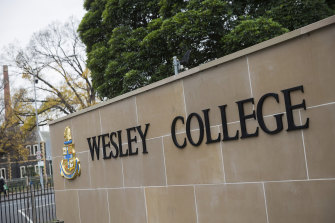 Students from Wesley College were reported to have made offensive comments about women while on a bus.Credit:Paul Jeffers

While both incidents were deplorable, this latest event seems particularly unbelievable coming at a time when the public discourse on treating women with respect and dignity has reached stratospheric levels, thanks to Australian of the Year, Grace Tame, the case of former Liberal staffer Brittany Higgins and the murder in the UK of Sarah Everard.

First, as Grace Tame said last week, “men are not the enemy” and it is clearly not all boys who behave this way. As a psychologist who toils in the vineyards of adolescence every day, I meet many kind, gentle, sensitive, socially aware, beautiful young men, who love and cherish their sisters, mothers and grandmothers and are simply appalled by what happened on that bus.

Second, such behaviour is not the exclusive province of private schools but can be seen throughout our education system. Perhaps some parents believe that if they send their sons to private schools that these institutions will somehow infuse them with “better” values, attitudes and beliefs. 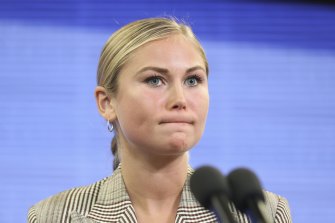 Australian of the Year Grace Tame. “Men are not the enemy.″⁣Credit:Alex Ellinghausen

What can explain the machismo and misogyny? Water cooler conversations will throw up a cavalcade of culprits: teenage brain development, adult role-modelling, adolescent attraction to novelty and risky behaviours, the power of peer pressure, abysmal and tardy education around respect and relationships, the influence of social media, mobile phones, violent video games, internet pornography, decline in community and being emersed from birth in a constant diet of violence as entertainment.

While all of these can and do constitute very real risk factors, parents and adult carers cannot escape scrutiny.

Perhaps it is time we named the catastrophic spinelessness of some parents to set intelligent limits, boundaries and consequences when it comes to the behaviour of their boys.

Some parents seem to have turned away from the focus of raising respectful, polite, well-mannered boys and instead have gone to worship at the altar of “happiness”. Some exhaust themselves trying to make their son’s life easy by doing things that he can do for himself, leaping in to fix his problems, handing him every single opportunity on a plate, and being his full-time cheerleader.

Letter from Wesley College principal to parents about the incident

Today, I was made aware of the disrespectful behaviour of some of our students travelling on public transport yesterday. I understand that these students made derogatory comments about women which was highly offensive and caused extreme discomfort. This behaviour is unacceptable. I am deeply disappointed to have Wesley students behave in such a manner. Such behaviour does not reflect what we value and share in our Wesley community.

I have run the gamut of emotions as a result of this news, from fury to frustration, from disbelief to determination, from shame to sadness.

I am sad because this is indicative of behaviour I have witnessed too often from too many men. Casual misogyny and sexism are so often expressed in all male conversations. This episode is no exception. I am ashamed not just because this reflects poorly on a school I love, but also because there have been times in my life, particularly my youth, when I was a bystander of such conversations and thus helped perpetuate them.

In my email of last week, I indicated that the Associate Principal Morag Howard in consultation with Heads of Campus, Kim Bence, Sheriden Vella and Jacinta Janssens conducted an audit of our programs dealing with consent and respectful relationships. The curriculum includes sexual intimacy, pornography, acceptable and unacceptable behaviour, and sexual risks and consequences, consent and the law, and gender-based violence. I also indicated last week that we would be examining how effective these programs are. We have begun a series of conversations with students regarding their effectiveness. It was clear last week, and it is even clearer now, that we have work to do.

As part of this work, Wesley College has recently partnered with Bravehearts, a leading child protection organisation. For our students this will provide additional education focusing on safety, consent and respectful relationships for young people as well as professional training for Wesley staff. I would like to add that I do not believe that the few involved in this incident represent the more than 3,300 students who attend Wesley College and who interact with their peers, teachers and wider community with respect and humility. The considerate young leaders that I challenged at the Prefect’s Dinner just weeks ago to bring the voice of the students to us are fine examples of our students – and they are the ones that your children look up to and model themselves after.

This episode is a painful moment, for those members of the public on the bus who had to endure it and for those of us who love this school. But from such pain must come learning and action.

With every good wish

Have we created rudderless, disconnected, bitter and resentful boys who are never challenged when they refuse to take out the garbage bins, pick up the dog poo or stack the dishwasher, or are rude, dismissive or intimidating to the women in their lives? We teach people how to treat us – what lessons have the boys on that bus been taught?

When elders are absent and good men and women do not step up, the peer group becomes the substitute source of life wisdom. Democracy doesn’t work with dogs or children; parents need to be the frontal cortex while their son’s brain is developing.

While schools do need to re-examine what they are doing in terms of sex education and when they are doing it, it is time for parents, grandparents and adult carers to exert a steadying influence, to become the voice of reason to counter this culture of misogyny, entitlement and indulgence.

The triple P parenting program teaches parents how to merge boundaries, discipline and calm governance with the necessary warmth, fun and open communication needed to raise boys who feel safe, valued and listened to. Perhaps it should be offered free of charge in all schools?

It is an oversimplification to point the finger at the education system. Yes, it has a role, but what happened on that bus should be both a warning and a clarion call to the parents of Australia.

It’s time to overthrow the republic of weak-willed parenting and reinstate the forgotten pillars of parenting: respect for all, wise, firm, fair and prudent governance.

Children are great imitators – it is time we gave them something great to imitate.
Remember, as US abolitionist Frederick Douglass said during the Civil War, it is easier to build strong boys than repair broken men.

Dr Michael Carr-Gregg is a child and adolescent psychologist.