Media companies and individual journalists are likely to face a Supreme Court trial for contempt of court over their reporting of the conviction of Cardinal George Pell for sexual abuse, after mediation ordered by a Supreme Court judge appeared to collapse.

Thirty journalists, editors and news organisations have been accused by Victorian prosecutors of breaching a suppression order imposed by the County Court, which in December 2018 prevented media from reporting the guilty verdicts a jury had reached against the cardinal. 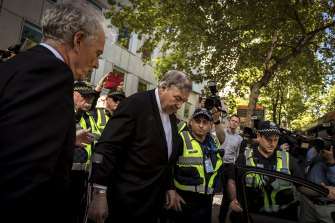 Cardinal Pell leaves the County Court in Melbourne after he was found guilty in December 2018 of sexually assaulting two boys.Credit:Chris Hopkins

The reporting did not name Cardinal Pell or the offences involved.

Cardinal Pell was released from prison in April after his conviction for sexually abusing two choirboys in the 1990s was overturned following a successful appeal to the High Court.

In the Victorian Supreme Court in Melbourne on Wednesday, Lisa De Ferrari, SC, acting for the Office of Public Prosecutions, and barrister Matt Collins, QC, appearing for the media, repeatedly clashed over whether media organisations should be compelled to provide evidence discussing the publication of the articles – such as emails and internal messages – which might incriminate the reporters and editors involved.

Dr Collins told Supreme Court judge John Dixon that even though self-incrimination protections do not apply to media organisations because they are business entities, divulging internal emails and other communications could jeopardise the right of the 17 accused reporters and editors to not self-incriminate.

“What [the prosecutors] are trying to do is get around deficiencies in the investigation … in order to seek evidence against the individual respondents,” he said.

Ms Ferrari rejected that categorisation, saying the documents the media organisations had filed failed to address the substance of the allegations made against them and their employees in the prosecution summary.

She said the articles themselves, some of which mentioned the existence of a non-publication order by the court, were adequate evidence to demonstrate that the defendants knowingly breached the County Court orders.

Prosecutors allege that in December 2018 media organisations including The Age and The Sydney Morning Herald breached a suppression order by publishing articles and broadcasts that reported a high-profile person had been found guilty of serious charges. Cardinal Pell was not named in any of the stories.

There are 30 accused in total – 19 individuals and 11 corporations – from six different media organisations.

The suppression order was in place because at the time Cardinal Pell was expected to face a second trial, and County Court chief judge Peter Kidd did not want reports of the first guilty verdict to influence a second jury.

The suppression order was lifted and the media was able to report the guilty verdicts in February last year, when prosecutors abandoned the second trial.

Dr Collins suggested media companies might argue that the result of the trial had already been published widely on social and international media in the roughly 36 hours between the time of the verdict and the reports that allegedly breached the suppression order.

He said it meant that in the months before the second trial the information would have been "swirling" through digital channels regardless of the actions of his clients.

The media organisations are also seeking internal emails and communications of Director of Public Prosecutions Kerri Judd, QC, that may detail the reasons why the second prosecution of Cardinal Pell was discontinued, a request which the OPP has rejected.

In March last year, Ms Judd filed more than 200 charges against 36 journalists and news organisations but most of those charges have since been withdrawn and six defendants have been removed from the proceedings.

The trial is due to commence on November 9 if the parties cannot come to an agreement.

Justice Dixon adjourned the matter for a directions hearing to a date not yet set down.