Doctors fear Melbourne hospitals will have no choice but to continue turning away ambulances at the door this summer because of a "perfect storm" of post-lockdown problems placing emergency departments under critical levels of strain.

Ambulance Victoria declared a “code red” with more than 2000 calls in hot weather on Monday evening, a 20 per cent increase on a regular day, which left public and private hospitals swamped with patients and caused longer waiting times for those not suffering life-threatening illness. 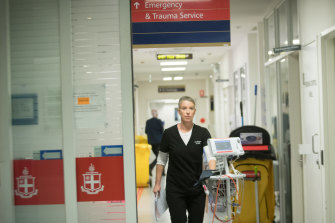 The Australasian College of Emergency Medicine warns departments are operating at capacity.Credit:Simon Schluter

"A lot of people have been either not getting in to their GP or not taking the time to see their GP. They think, 'I will just deal with it later,' " he said.

"That can lead to having a situation where things get so bad they just call an ambulance."

Temperatures peaked at 33 degrees in Melbourne CBD on Monday and did not drop below 20 degrees overnight. Just before 9pm, Ambulance Victoria was forced to put out a tweet pleading with those not in immediate danger to use Nurse on Call instead of dialling 000.

About half the calls to triple zero on Monday were non-urgent cases that could be dealt with via phone health services. But the number of patients who did need an ambuulance put the system under severe pressure.

John Bonning, president of the Australasian College of Emergency Medicine (ACEM), said some hospitals reported a shortage of beds in emergency departments on Monday that left ambulances either diverted to other sites or unable to offload patients, a phenomenon commonly referred to as ramping. In tandem with more Victorians calling for ambulances, Dr Bonning said, wards were increasingly filling up with more patients than even before the pandemic, as Melburnians have returned – sometimes overexuberantly – to normal life in recent weeks.

"It is a bit of a perfect storm of a whole range of factors. There's this post-lockdown phenomenon, which has occurred in many countries, where we see more accidents and acute health issues as the population has this big release," he said.

"In Victoria there's a push to ramp up elective surgery that was put on hold; that takes up beds. Drugs and alcohol is a big factor again; between 15 and 25 per cent of presentations on a weekend night are due to alcohol.

"Mental health presentations, particularly among young people, are huge at the moment."

ACEM said Victorian emergency presentations had increased by 6 per cent since 2011-12 without a commensurate increase in resources. 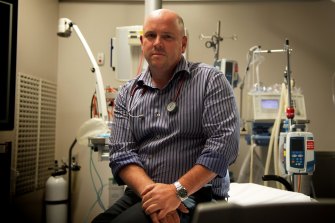 Dr Simon Judkins says many hospital workers are tired or on leave after a demanding year.Credit:Jason South

Dr Bonning warned more hot nights this summer, particularly over the Christmas and new year period, would probably result in more patients being turned away.

"It’s likely to get worse over the next few weeks, because not a lot of these problems will go away," he said.

"It's an entire hospital system issue that manifests in the emergency department and we're seeing it all across Melbourne."

Dr Simon Judkins, an emergency department physician in several Melbourne hospitals and an ACEM member, said many hospital workers were tired or on leave after a year that began with bushfires across Victoria and then the ravages of the second COVID-19 wave.

Combined with some hospital departments shutting over Christmas, "we have an emergency system working at capacity and beyond", he said.

"Emergency departments always seem to become the melting pot or last resort for patients. We are the only door open 24/7, especially at the moment."

Dr Carl Le, a senior emergency doctor at two private hospitals, said the situation was so bad at Knox Private Hospital, where he was working on Monday evening, that the facility went onto ambulance bypass, meaning it was no longer accepting ambulances.

"When that happens to us in private, we know that in public [hospitals] there are even longer waits for patients," he said.

Ambulance Victoria said all urgent callouts on Monday – about 1000 – received timely care, despite the service scrambling for paramedics to fill in at late notice.

Mr Hill from the ambulance union said at one stage more than 100 patients were waiting for an ambulance on Monday.

"The workload is getting to a point where [paramedics] are working overtime shifts, working late and not getting their meal breaks," Mr Hill said. 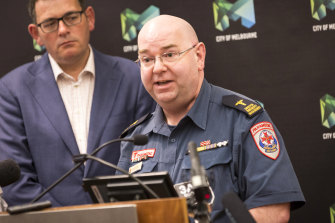 Justin Dunlop, director of emergency management for Ambulance Victoria, said the service had stepped up its communications to the public on busy nights since 2016's thunderstorm asthma event that killed 10 people, when a "code red" was also called.

"We're now going into a summer with predictions of La Nina, and a range of other potential emergencies," he said.

"So it's a difficult time and it's important that we all make sure that our health is being taken care of and we don't put undue burden on the system."

"We want to call upon people to take more control of their health and wellbeing themselves," he said.

"To make sure they engage with their pharmacist and their GP, so those more routine matters can be dealt with through other mechanisms rather than calling triple zero in the middle of a very hot night."