Ashley Fraser is hoping to achieve a feat rarely seen in Victoria – two years in a row when well-timed rain, healthy soil and crop prices align to make for ideal farming conditions.

Tractors have been rumbling around the clock on his farm near Rutherglen in the state’s north-east, sowing barley, wheat and canola into enormous fields that will hopefully explode into a patchwork of green and yellow by the spring. 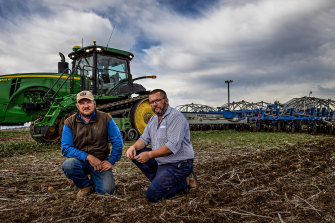 Farmers Jonathan Collins and Ashley Fraser in the field at Lilliput, near Rutherglen. Credit:Jason Robins

It is now crop sowing season across Victoria. But while some farmers in the north-east have enjoyed good rainfall, others in the Wimmera and Mallee are growing increasingly nervous about their drier start.

Last year the rain arrived at just the right time on Mr Fraser’s farm and recent drenchings have again ensured that seeds are going into rich and moist soil.

“We don’t often see two years back-to-back so we’ve got our fingers crossed. But there’s a long way to go between now and springtime,” Mr Fraser says. “A lot can happen.”

Mr Fraser’s farm spreads over 2000 hectares with his cropping business consisting of 30 per cent wheat and 30 per cent canola while beans, lupin, oats and barley make up the remainder. 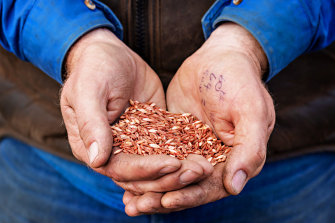 Seeds of the barley max variety about to go into the ground. Credit:Jason Robins

He is now hoping canola prices will remain strong, particularly after last year’s bumper crop, and that spring rains arrive in time to maximise yields.

Despite the favourable early conditions, challenges are never far away. Thankfully the farm has managed to avoid the mouse plague ravaging parts of NSW but rodent numbers are increasing.

The farm’s operations manager Jonathan Collins says there have been more mice recently, particularly in and around sheds.

“It’s been a long time since we’ve had a mice plague here,” he says. “They can decimate haystacks. They can do a lot of damage to machinery. They love chewing on wires.”

Further west, Justin Ruwoldt is sweating on a late start to the season at his property in Kewell, just north of Horsham.

He says farmers in the area are more sceptical about this year’s prospects, with much-needed rain yet to arrive. “There’s been sporadic rainfall no greater than eight millimetres,” he says.

Mr Ruwoldt estimates he is about a month behind schedule, which is a worry heading into winter. He grows wheat, barley, canola, fava beans and lentils.

“If that breaking rain comes in June then certainly those yields aren’t going to reach the heights because we haven’t had the growing season length to achieve the big yields.”

Last year farmers across Australia delivered one of the biggest grain harvests in the final quarter, providing a 33 per cent rise in agricultural production. Wheat, barley and canola are the three biggest grain crop categories in Victoria.

La Trobe University agronomist James Hunt says this week the price for canola had pushed past $740 a tonne in Geelong, while wheat fetched about $310. But he stresses these prices can change by harvest time.

“The big issue at the moment is whether there’s enough moisture in the seedbed to germinate and establish crops,” Dr Hunt says. “That’s really important and it’s really variable across the state right now.”

Agriculture Victoria seasonal risk agronomist Dale Grey says there is moisture embedded about 50 centimetres beneath the soil’s surface in the Mallee. “To get the moisture to link up we would need something like 50 to 75 millimetres of rain,” he says.

Mr Grey says some farmers may be willing to gamble on sowing greater quantities of canola in medium to wetter parts of the state than previous years because prices have been so strong. “The risk is more worth taking this year.”