A website launched to help save this year’s harvest after coronavirus blocked foreign labourers from coming to the UK crashed this evening, just minutes after a minister begged furloughed Britons to lend a hand.

The Pick for Britain website went down this evening within minutes of Environment Secretary George Eustice appealing for domestic workers to plug gaps in the nation’s fields.

He used the daily Downing Street press conference to ask for help from those in need of more money, who wanted to ‘lend a hand and play their part’ or simply to get out into the open air.

The UK normally relies on armies of mainly Romanian and Bulgarian workers, but as many as two thirds of the usual workforce is unable to get to the UK because of coronavirus, the minister revealed.

A government spokesman said the website crashed because of a surge in demand, with visitors increasing from around 2,000 to more than 160,000 during the press conference.

Mr Eustice told the nation: ‘One thing is clear and that is that this year we will need to rely on British workers to lend a hand to help bring that harvest home. 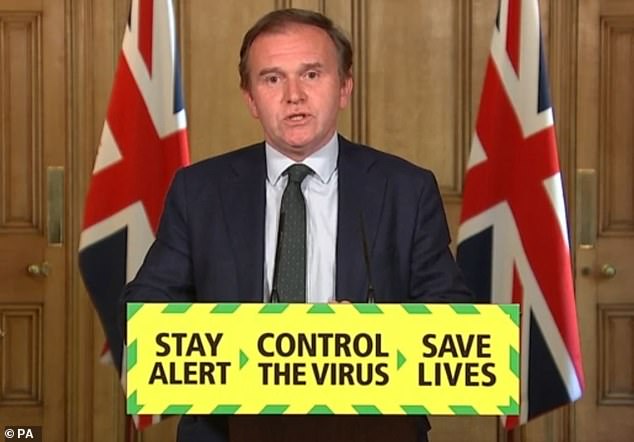 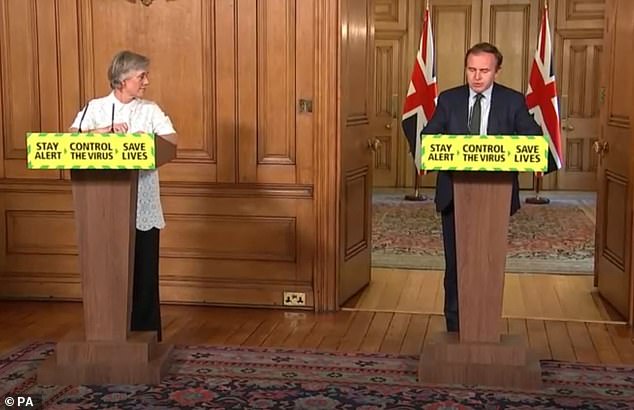 He used the daily Downing Street press conference to ask for help from those in need of more money, who wanted to ‘lend a hand and play their part’ or simply to get out into the open air

‘Over the last couple of months, we have been working with industry on a plan to support and help people taking second jobs, particularly those who are furloughed.

‘And we have launched a new Pick for Britain website that enables people to go online, check what job issues there are, what job availability there is and marry up job opportunities for the growers and employers with those people seeking a second job – particularly those that are furloughed.

‘We believe that those who are furloughed may be getting to the point that they want to lend a hand and play their part.

The website, supported by the industry, was launched in April by the Department for Environment, Food & Rural Affairs and the Agriculture and Horticulture Development Board, to help bring those seeking work and farmers together.

Peak periods for harvesting produce run from June to the autumn and it is hoped that people from students to laid-off hospitality workers will take the opportunity.

Shadow environment secretary Luke Pollard said: ‘Ministers have known for months that we are short of thousands of agricultural workers and there is a genuine risk that crops will rot in the fields without a new national effort.

‘Labour has been pushing ministers to launch proposals for a land army weeks ago.

‘If people don’t know about the opportunities available in agriculture, they won’t apply for it. It is now time for a national effort to pick for Britain. ‘

The website is also being backed by the Prince of Wales, who today  called on ‘pickers who are stickers’ to join a national effort to help farmers with the ‘unglamorous’ job of harvesting fruit and vegetables.

Charles backed the Government’s initiative to bring UK workers and farmers together to ensure crops are not left to rot in the ground during the coronavirus outbreak.

He likened the ‘vital’ project to the Women’s Land Army, which helped boost Britain’s food production during the Second World War.

The prince, who runs an organic farm at his home in Gloucestershire, says in the video: ‘Food does not happen by magic, it all begins with our remarkable farmers and growers.

‘If the last few weeks have proved anything, it is that food is precious and valued, and it cannot be taken for granted.

‘This is why that great movement of the Second World War – the Land Army – is being rediscovered in the newly created ‘Pick For Britain’ campaign.

‘In the coming months, many thousands of people will be needed to bring in the crops. It will be hard graft but is hugely important if we are to avoid the growing crops going to waste.’

In the video, which was recorded in the vegetable garden of Charles’s Scottish home and will be posted on the Clarence House social media channels later, the heir to the throne says: ‘Harvesting runs until the early autumn and people are needed who are genuinely going to commit.

‘The phrase I have often heard is ”pickers who are stickers”.

‘I do not doubt that the work will be unglamorous and, at times, challenging. But it is of the utmost importance and, at the height of this global pandemic, you will be making a vital contribution to the national effort.

‘So, I can only urge you to Pick For Britain.’