Collingwood footballer Jordan De Goey has been spared an appearance at court and his indecent assault case has been adjourned until well into next year.

Mr De Goey was charged in July over an incident that allegedly happened after he, another man and a woman left a hotel in Kew in 2015, when the forward was either 18 or 19. 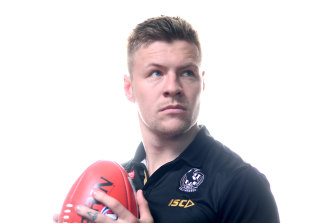 He was due to appear before Melbourne Magistrates Court for an initial filing hearing on Friday but his case was administratively adjourned without the need for him or his lawyers to appear in court.

It is not uncommon for cases to be adjourned before scheduled first hearings, especially during the coronavirus pandemic when many cases have been adjourned.

The court is yet to release a charge sheet or further information about his alleged offending.

Police, Collingwood and the AFL's integrity unit investigated the incident in 2018 but Mr De Goey was not charged until this year.

Another man, also 24, has been charged and he also had his case adjourned on Friday without needing to attend court. He has no association with Collingwood.

Mr De Goey was not stood down by his club or the AFL after he was charged but ended up missing a large chunk of the season after he suffered a finger injury in the Magpies' win over Geelong in mid-July. He returned to play the last four games of the season.

Mr De Goey is out of contract and Collingwood are yet to re-sign him, and the delay to his court case complicates a potential trade to another case as rival clubs – and the Magpies – are unlikely to know the strength of the police case against the player until a brief of evidence is served on his lawyers.

Mr De Goey is also due to face court in March on unrelated driving offences.