Federal Defence Minister Peter Dutton has shot down a Victorian plan to build a Commonwealth-funded quarantine facility in Melbourne’s north, just a day after it was announced by acting Premier James Merlino.

Mr Merlino announced on Thursday morning that the state would invest $15 million to begin designing and planning a 500-bed quarantine facility to house international arrivals on federal land in Mickleham. 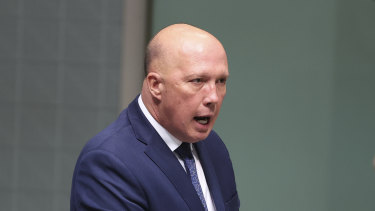 But the federal government was kept in the dark about Victoria’s plans for its purpose-built quarantine facility, which is entirely contingent on $200 million of Commonwealth funding.

On Friday morning, Mr Dutton indicated there was little support from the federal government for a purpose-built facility in Victoria.

“I have seen some political smoke and mirrors over my time and I think this is right at the top of the list,” Mr Dutton told Nine’s Today program.

“This is a $15 million generous donation from the Victorian government to do the planning for a $700 million bill that they want the Commonwealth to pick up.”

Mr Dutton said hotel quarantine was “doing a good job” and described numerous leaks that led to snap lockdowns around the country as “small blips”.

“As we are seeing in NSW, where 3,000 people a week are coming into hotel quarantine… as we have seen around the rest of the country, hotels are working very well,” he said.

“They are able to be scaled up. It gives us the ability to bring people in, quarantine them and send them back home to get on with their lives.

“We have now had half a million people who have come back from overseas for different reasons and it’s working.

“We are supporting the states. They’re doing a good job. The contact tracing is working where things might go off the rails, but the fact is that this is a very good model and we will continue to support the states.”

Meanwhile, Victorian health authorities have taken the unprecedented step of ordering more than 200 people to immediately retest for COVID-19 after strong viral fragments were found in Melbourne’s wastewater.

Although there have been dozens of wastewater detections in recent months across the state which have not unearthed unknown cases, the Health Department said the “strong and unexpected” samples collected in Melbourne’s western and north-western suburbs required an escalated response.

“This additional action is being taken due to the strength of the wastewater detection and because a known positive COVID-19 case, from flight QF778, has been in Victoria in the past 14 days,” a spokesperson said late on Thursday.

The 246 people from an extensive list of suburbs told to get retested are recently returned interstate travellers from designated red or orange zone areas, as well as four close contacts of the positive case who travelled from Perth to Melbourne on flight QF778 last week.

“All of these primary close contacts have recently been tested and have returned negative results. All of the 246 people are being asked to test again out of an abundance of caution,” the spokesperson said.

Anyone else with symptoms in any of the more than 80 suburbs with active or new wastewater detections is urged to come forward for testing immediately.

As of Thursday there were 1620 people in hotel quarantine across twelve hotels, including 23 active cases of COVID-19.

Victoria became the leading state on vaccine doses delivered on Thursday with 3,662 vaccines delivered pushing the total to 202,506 surpassing NSW on 202,220.